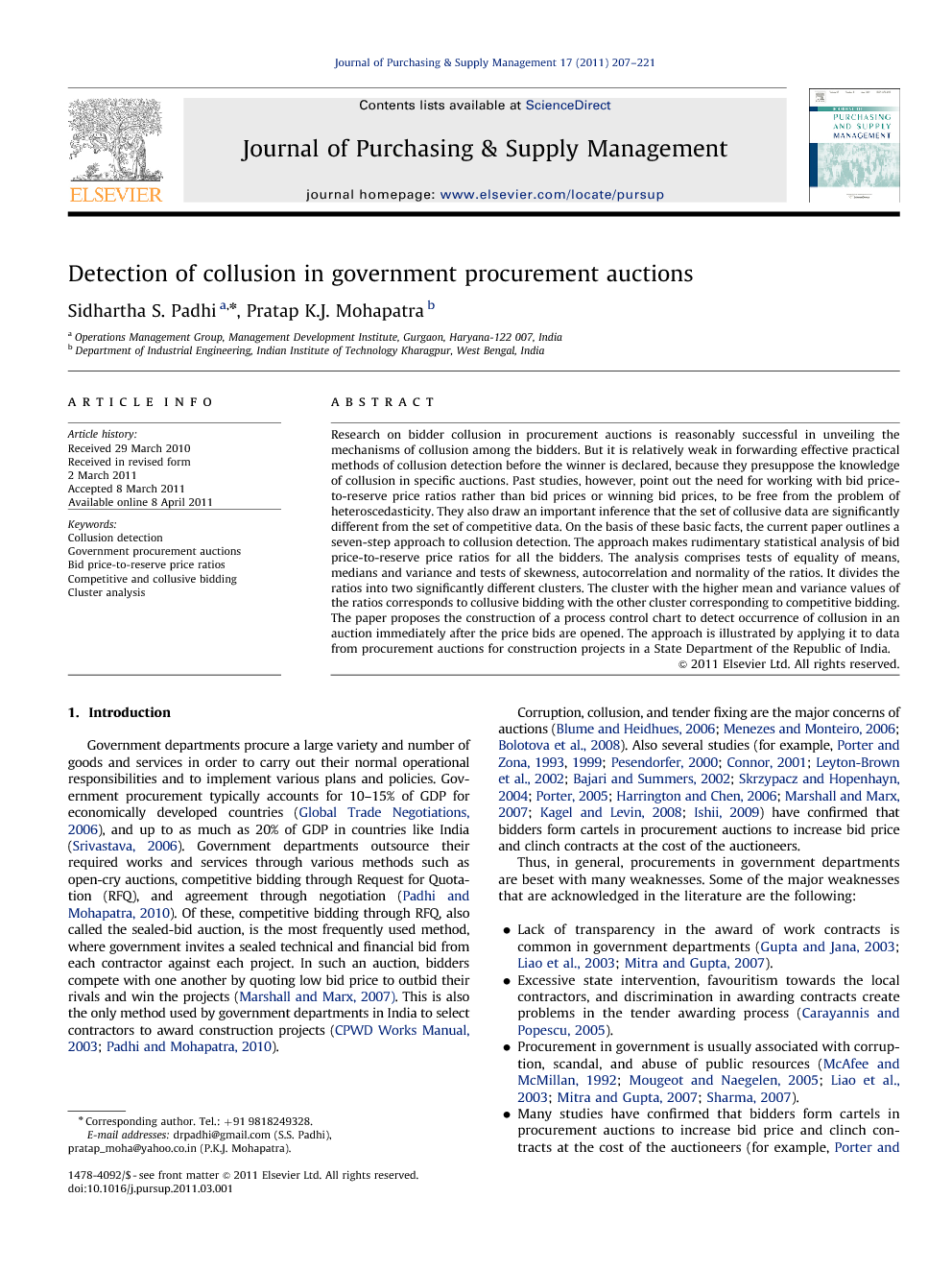 Research on bidder collusion in procurement auctions is reasonably successful in unveiling the mechanisms of collusion among the bidders. But it is relatively weak in forwarding effective practical methods of collusion detection before the winner is declared, because they presuppose the knowledge of collusion in specific auctions. Past studies, however, point out the need for working with bid price-to-reserve price ratios rather than bid prices or winning bid prices, to be free from the problem of heteroscedasticity. They also draw an important inference that the set of collusive data are significantly different from the set of competitive data. On the basis of these basic facts, the current paper outlines a seven-step approach to collusion detection. The approach makes rudimentary statistical analysis of bid price-to-reserve price ratios for all the bidders. The analysis comprises tests of equality of means, medians and variance and tests of skewness, autocorrelation and normality of the ratios. It divides the ratios into two significantly different clusters. The cluster with the higher mean and variance values of the ratios corresponds to collusive bidding with the other cluster corresponding to competitive bidding. The paper proposes the construction of a process control chart to detect occurrence of collusion in an auction immediately after the price bids are opened. The approach is illustrated by applying it to data from procurement auctions for construction projects in a State Department of the Republic of India.

On the basis of the significant findings from the review of literature on detection of collusion, this paper outlines a simple seven-step approach, based on rudimentary statistical analysis, to analyse the bid price behaviour of the winning contractors as well as their competitors. The analysis basically divides the bid price-to-reserve price ratios into two (statistically) significantly different clusters, with the ratios showing higher values of central tendency and variance forming one cluster, and the ratios corresponding to competitive bidders forming the other cluster. We conclude the following: 1. Bid price-to-reserve price ratios provide a more acceptable form of basic data to analyse for testing for the presence of collusion. 2. Collusive bidding is characterized by higher mean and variance values of bid price-to-reserve price ratios compared to the competitive bidders. 3. The tests of equality of means, medians, and variances, and tests of skewness, auto-correlation, and normality are simple statistical tests but they are very effective in distinguishing collusive bidding from competitive bidding. 4. The proposed seven-step approach can be applied as a first test to detect collusion before going for the more comprehensive multiple regression approach. 5. These tests can be applied to detect collusion in new auctions by carrying them out on new bid price data to compare their statistics (mean, median, variance, etc.) with those of the stored past bid price data that represent collusion-free (competitive) auctions. Based on the significantly different clusters representing collusive and competitive bids, the paper draws a similarity between a controlled process and an auction with competitive bidding. The common causes of variation are due to bidder differences with regard to their natural endowments and capabilities. Thus the variation in the price ratios will follow normal distribution and the price ratios will fall within three-sigma limits of the mean and the range control charts. Collusion among the bidders is a special cause of variation of price ratios and, therefore, the price ratios for a collusive environment will fall outside the upper control limit in either the mean control chart or the range chart or in both. Using the principles of process control charts it should be possible to identify collusive bidding pattern from the knowledge of bid prices of a newly conducted procurement auction. Our work has its limitations. The autocorrelation study is normally carried out for a time-series separated by equally spaced in time. The price ratios in the each cluster are really not time-series; they are arranged in a sequence during the cluster analysis, instead. When applied to a real situation, this analysis should be done on the time-series price ratio data, instead. This is also the limitation in the control chart application to detection of bidder collusion. One should take the time-series price ratio data instead. Another limitation of the control chart application is that the control limits are computed and applied assuming that the sample size (the number of bidders in an auction) is constant. In the data set for the Rural Development Department, the sample size varies from auction to auction. Therefore, one should have used multiple pairs of upper and lower control limits for each sample size, instead. The work presented in this paper can be extended in many ways. The tests and the control chart applications need to be applied to online procurement auctions both for validation and for taking the advantage of these simple and practical tools. It should be possible to investigate the effect of size of collusive bidders on the mean and variance of price ratios in an auction. Price ratio characteristics (in terms of mean and range) are likely to be different when all or nearly all bidders are engaged in collusion compared to when only a small fraction of bidders is engaged. When we applied the regression method of Bajari and Ye (2003) to our price data, R2 was only 0.72 for competitive bidding, indicating that 72% of the variation can be explained by the independent variables. It means that probably there is one or more independent variables on which the winning price ratio might depend. For example, the financial capability of a contractor vis-à-vis the estimated project cost and the expected payoffs are important factors in the Indian context. A more fundamental study calls for investigations into the reasons of formation and breakup of cartels in procurement auctions. It is possible to also test different auction mechanisms (such as second price-sealed bid and progressive reverse auction) to reduce collusion. Furthermore, while these tests can help to detect departures from competitive behaviour, they do not directly establish that a departure is the result of an illegal agreement, rather than a form of tacit collusion resulting from firms acting independently while aware of the effects of their behaviour on each other. Nonetheless, these methods can be used as a first step to determine whether suspicious bidding has occurred and whether further investigation and analysis is warranted.