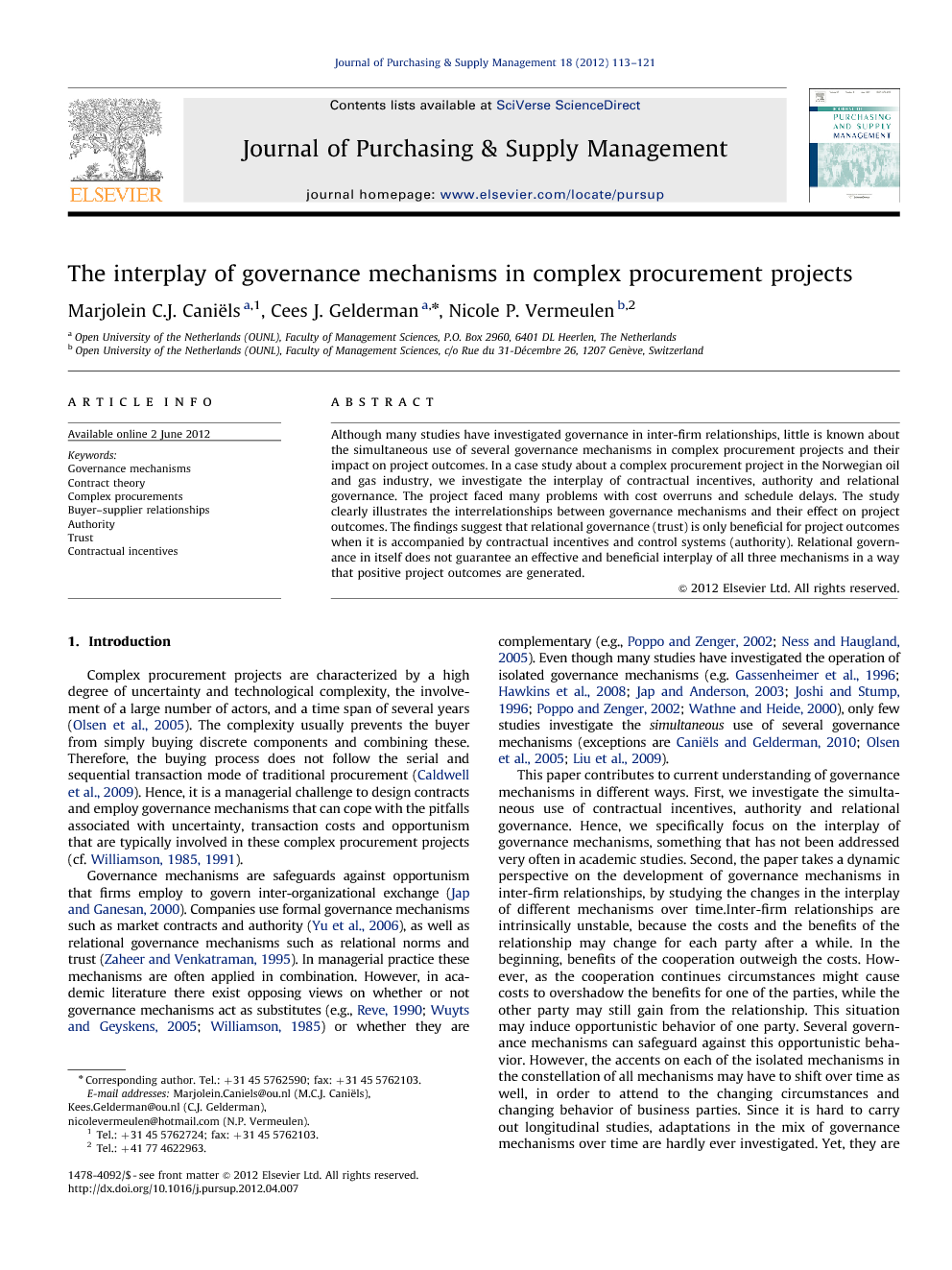 Complex procurement projects are characterized by a high degree of uncertainty and technological complexity, the involvement of a large number of actors, and a time span of several years (Olsen et al., 2005). The complexity usually prevents the buyer from simply buying discrete components and combining these. Therefore, the buying process does not follow the serial and sequential transaction mode of traditional procurement (Caldwell et al., 2009). Hence, it is a managerial challenge to design contracts and employ governance mechanisms that can cope with the pitfalls associated with uncertainty, transaction costs and opportunism that are typically involved in these complex procurement projects (cf. Williamson, 1985 and Williamson, 1991). Governance mechanisms are safeguards against opportunism that firms employ to govern inter-organizational exchange (Jap and Ganesan, 2000). Companies use formal governance mechanisms such as market contracts and authority (Yu et al., 2006), as well as relational governance mechanisms such as relational norms and trust (Zaheer and Venkatraman, 1995). In managerial practice these mechanisms are often applied in combination. However, in academic literature there exist opposing views on whether or not governance mechanisms act as substitutes (e.g., Reve, 1990; Wuyts and Geyskens, 2005; Williamson, 1985) or whether they are complementary (e.g., Poppo and Zenger, 2002; Ness and Haugland, 2005). Even though many studies have investigated the operation of isolated governance mechanisms (e.g. Gassenheimer et al., 1996; Hawkins et al., 2008; Jap and Anderson, 2003; Joshi and Stump, 1996; Poppo and Zenger, 2002; Wathne and Heide, 2000), only few studies investigate the simultaneous use of several governance mechanisms (exceptions are Caniëls and Gelderman, 2010; Olsen et al., 2005; Liu et al., 2009). This paper contributes to current understanding of governance mechanisms in different ways. First, we investigate the simultaneous use of contractual incentives, authority and relational governance. Hence, we specifically focus on the interplay of governance mechanisms, something that has not been addressed very often in academic studies. Second, the paper takes a dynamic perspective on the development of governance mechanisms in inter-firm relationships, by studying the changes in the interplay of different mechanisms over time.Inter-firm relationships are intrinsically unstable, because the costs and the benefits of the relationship may change for each party after a while. In the beginning, benefits of the cooperation outweigh the costs. However, as the cooperation continues circumstances might cause costs to overshadow the benefits for one of the parties, while the other party may still gain from the relationship. This situation may induce opportunistic behavior of one party. Several governance mechanisms can safeguard against this opportunistic behavior. However, the accents on each of the isolated mechanisms in the constellation of all mechanisms may have to shift over time as well, in order to attend to the changing circumstances and changing behavior of business parties. Since it is hard to carry out longitudinal studies, adaptations in the mix of governance mechanisms over time are hardly ever investigated. Yet, they are part of daily business practice and as such a relevant and interesting area of research that can offer important managerial insights. Third, the study links the co-evolvement of governance mechanisms to project outcomes, assessed in terms of cost, timely delivery and achieved quality. The specific focus on project outcomes is original, because most studies in this field focus on the use or working of governance mechanisms in buyer–supplier relationships, but not so much on the impact of these mechanisms in a project management context. In order to explore the interplay of governance mechanisms a case study has been conducted on a complex procurement project in the Norwegian offshore oil and gas industry. Companies in the oil and gas industry generally spend around 80% to 90% of their costs on contractors (Raymond and Leffler, 2006). Procurement projects in this sector are generally complex, inducing companies to explore the simultaneous use of contracts and other governance mechanisms (Olsen et al., 2005). The case study involved semi-structured interviews with key respondents, which were employed by an initial operator, a second operator and an integrator. Furthermore, this study draws on the available documentation and archival records such as contracts and project monthly reports. This article is organized as follows. First, we present the theoretical background of the study, resulting in a conceptual model. Then, we discuss the research methodology, followed by a presentation of the results of the case study. Subsequently, we discuss the results by analyzing our empirical observations and comparing them to what is known from previous studies. The final section presents conclusions and recommendations for further research.