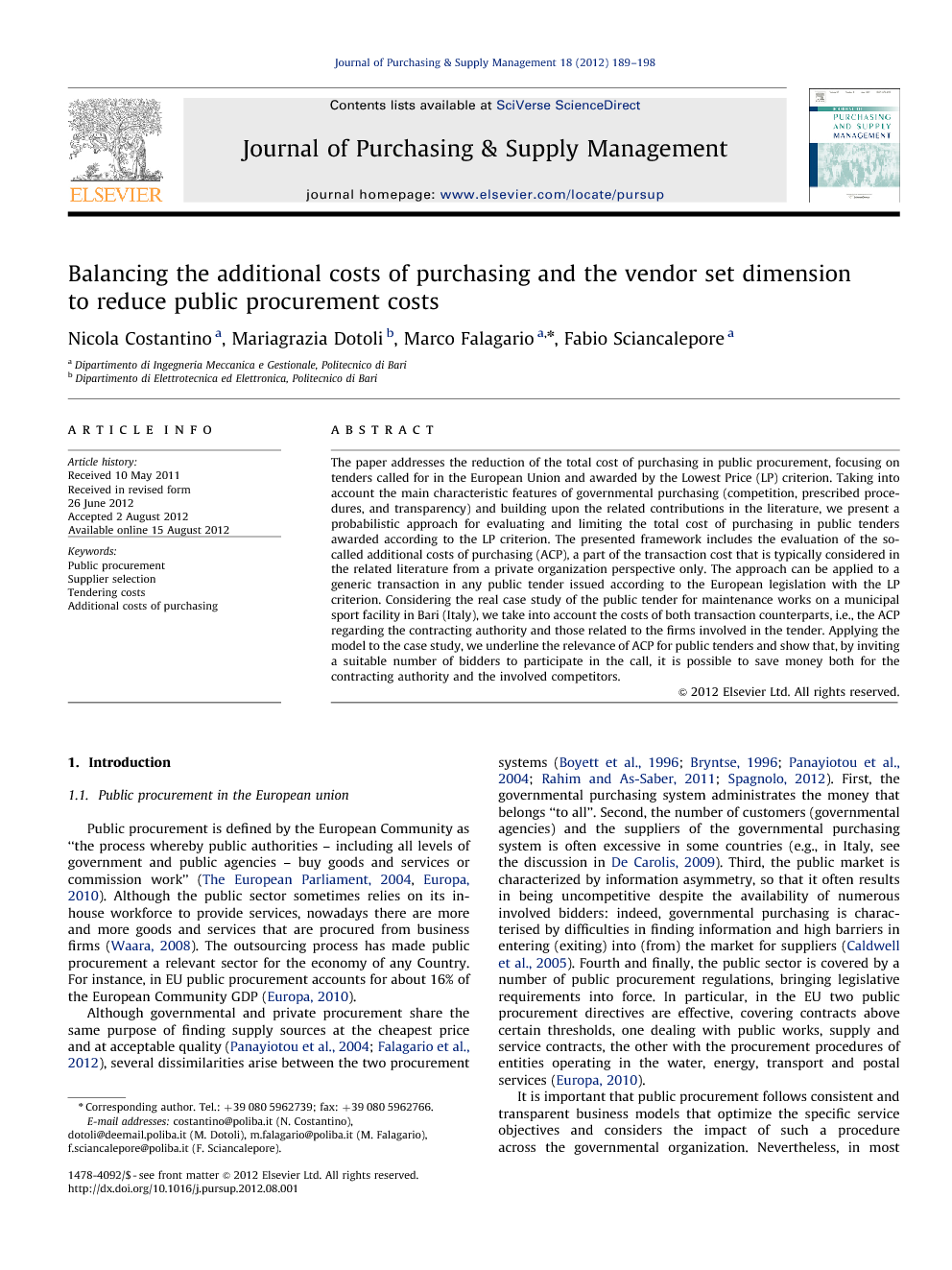 The paper addresses the reduction of the total cost of purchasing in public procurement, focusing on tenders called for in the European Union and awarded by the Lowest Price (LP) criterion. Taking into account the main characteristic features of governmental purchasing (competition, prescribed procedures, and transparency) and building upon the related contributions in the literature, we present a probabilistic approach for evaluating and limiting the total cost of purchasing in public tenders awarded according to the LP criterion. The presented framework includes the evaluation of the so-called additional costs of purchasing (ACP), a part of the transaction cost that is typically considered in the related literature from a private organization perspective only. The approach can be applied to a generic transaction in any public tender issued according to the European legislation with the LP criterion. Considering the real case study of the public tender for maintenance works on a municipal sport facility in Bari (Italy), we take into account the costs of both transaction counterparts, i.e., the ACP regarding the contracting authority and those related to the firms involved in the tender. Applying the model to the case study, we underline the relevance of ACP for public tenders and show that, by inviting a suitable number of bidders to participate in the call, it is possible to save money both for the contracting authority and the involved competitors.

Public procurement is defined by the European Community as “the process whereby public authorities – including all levels of government and public agencies – buy goods and services or commission work” (The European Parliament, 2004 and Europa, 2010). Although the public sector sometimes relies on its in-house workforce to provide services, nowadays there are more and more goods and services that are procured from business firms (Waara, 2008). The outsourcing process has made public procurement a relevant sector for the economy of any Country. For instance, in EU public procurement accounts for about 16% of the European Community GDP (Europa, 2010). Although governmental and private procurement share the same purpose of finding supply sources at the cheapest price and at acceptable quality (Panayiotou et al., 2004; Falagario et al., 2012), several dissimilarities arise between the two procurement systems (Boyett et al., 1996, Bryntse, 1996, Panayiotou et al., 2004, Rahim and As-Saber, 2011 and Spagnolo, 2012). First, the governmental purchasing system administrates the money that belongs “to all”. Second, the number of customers (governmental agencies) and the suppliers of the governmental purchasing system is often excessive in some countries (e.g., in Italy, see the discussion in De Carolis, 2009). Third, the public market is characterized by information asymmetry, so that it often results in being uncompetitive despite the availability of numerous involved bidders: indeed, governmental purchasing is characterised by difficulties in finding information and high barriers in entering (exiting) into (from) the market for suppliers (Caldwell et al., 2005). Fourth and finally, the public sector is covered by a number of public procurement regulations, bringing legislative requirements into force. In particular, in the EU two public procurement directives are effective, covering contracts above certain thresholds, one dealing with public works, supply and service contracts, the other with the procurement procedures of entities operating in the water, energy, transport and postal services (Europa, 2010). It is important that public procurement follows consistent and transparent business models that optimize the specific service objectives and considers the impact of such a procedure across the governmental organization. Nevertheless, in most governmental areas the process of procurement may be a complex and expensive task, since often the dimension of the vendor set (i.e., the group of potential suppliers willing to bid) is large. For instance, with regard to Italy, a number of bidders larger than 10 participating to a public tender is the rule, as some of the authors experienced in their relation with public authorities. The interested reader is referred to De Carolis (2009), who shows that for public contracts worth more than € 150,000, held in the years 2000–2008, the vast majority of tenders (95%) involved more than 30 bidders on average. Moreover, decisions have to be based on simple economic evaluations, due to the transparency requisite. Referring to the European Union, the reference law for public tenders is the 2004/18/EC Directive, also called the Public Procurement Directive and enacted by the European Parliament (2004). According to such a Directive, the contract for a public tender is to be awarded on the basis of objective criteria which ensure compliance with the principles of transparency, non-discrimination, and equal treatment, while guaranteeing that tenders are assessed in conditions of effective competition. In order to reach these goals, only the application of either one of the following two award criteria is allowed: the “lowest price” (LP) and the “Most Economically Advantageous Tender” (MEAT) criterion. Typically, the LP principle is significant in case the main purpose is to save money. On the other hand, when the contract is awarded on the basis of the MEAT criterion, the contracting authority indicates multiple criteria, with an order of importance and depending on the object of the contract, against which the contract is awarded. Hence, the MEAT criterion reflects the necessity for a more complex purchasing management process, which is typical of customized service/products, taking into account also other parameters than price in the vendor selection (Lorentziadis, 2010). This paper focuses on tenders awarded by the LP criterion, which essentially takes into account the traditional purchasing concept of awarding the contract at the cheapest price as the only element differentiating offers (Piga and Zanza, 2005), so that such a criterion is typically applied when the features of the supplied product, service, or work are standardized (Lorentziadis, 2010). Finally, we remark that in the European legislation the possibility of restricting the number of bidders is contemplated. Indeed, the recalled Public Procurement Directive states that, when calling for tenders, the public authority may choose between an open or a restricted procedure: if the first procedure is chosen then anyone may bid, otherwise the public authority checks the technical and economic competence of the bidders, by carrying out their so-called “pre-qualification”. This paper takes into account both procedures and discusses how to determine the profitability of one with respect to the other.

We present a model for procurement in public tenders awarded according to the Lowest Price (LP) criterion. The technique can be applied to a generic transaction in any public tender issued according to the European legislation with the LP criterion. The presented formalism is based on a probabilistic approach and determines the total cost of the transaction by evaluating, besides the purchasing price, the so-called additional costs of purchasing (ACP). We show that these side costs are incurred both by the contracting authority and the bidders. Applying the proposed approach to a case study, we show the relevance of the ACP costs and conclude that, by limiting the number of bidders participating to the call, for instance by way of a pre-qualification phase, it is possible to save money both for the contracting authority and the involved competitors. Further developments of this study will aim at relaxing some of the model assumptions. In addition, modeling collusive events among bidders will be investigated.