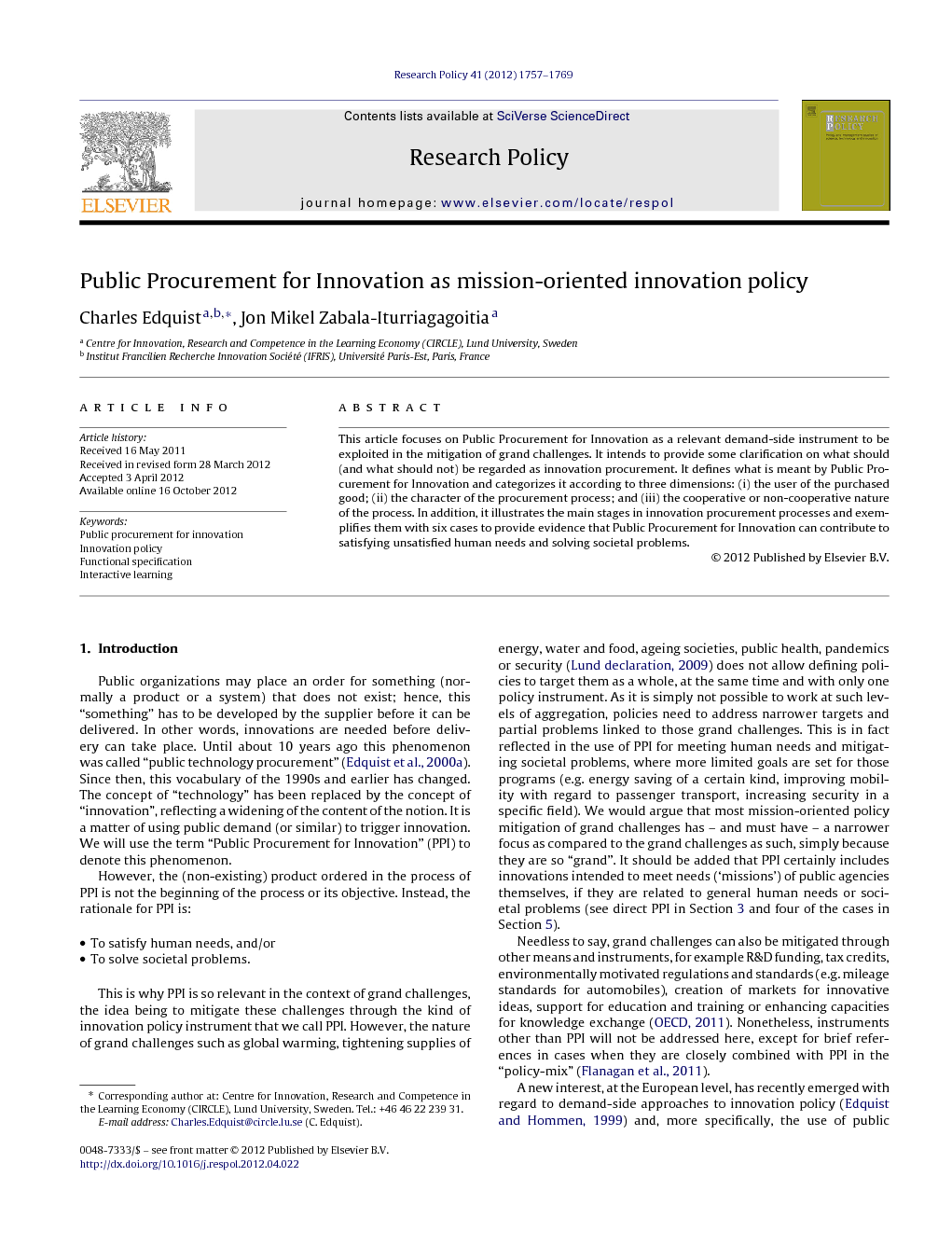 Public organizations may place an order for something (normally a product or a system) that does not exist; hence, this “something” has to be developed by the supplier before it can be delivered. In other words, innovations are needed before delivery can take place. Until about 10 years ago this phenomenon was called “public technology procurement” (Edquist et al., 2000a). Since then, this vocabulary of the 1990s and earlier has changed. The concept of “technology” has been replaced by the concept of “innovation”, reflecting a widening of the content of the notion. It is a matter of using public demand (or similar) to trigger innovation. We will use the term “Public Procurement for Innovation” (PPI) to denote this phenomenon. However, the (non-existing) product ordered in the process of PPI is not the beginning of the process or its objective. Instead, the rationale for PPI is: • To satisfy human needs, and/or • To solve societal problems. This is why PPI is so relevant in the context of grand challenges, the idea being to mitigate these challenges through the kind of innovation policy instrument that we call PPI. However, the nature of grand challenges such as global warming, tightening supplies of energy, water and food, ageing societies, public health, pandemics or security (Lund declaration, 2009) does not allow defining policies to target them as a whole, at the same time and with only one policy instrument. As it is simply not possible to work at such levels of aggregation, policies need to address narrower targets and partial problems linked to those grand challenges. This is in fact reflected in the use of PPI for meeting human needs and mitigating societal problems, where more limited goals are set for those programs (e.g. energy saving of a certain kind, improving mobility with regard to passenger transport, increasing security in a specific field). We would argue that most mission-oriented policy mitigation of grand challenges has – and must have – a narrower focus as compared to the grand challenges as such, simply because they are so “grand”. It should be added that PPI certainly includes innovations intended to meet needs (‘missions’) of public agencies themselves, if they are related to general human needs or societal problems (see direct PPI in Section 3 and four of the cases in Section 5). Needless to say, grand challenges can also be mitigated through other means and instruments, for example R&D funding, tax credits, environmentally motivated regulations and standards (e.g. mileage standards for automobiles), creation of markets for innovative ideas, support for education and training or enhancing capacities for knowledge exchange (OECD, 2011). Nonetheless, instruments other than PPI will not be addressed here, except for brief references in cases when they are closely combined with PPI in the “policy-mix” (Flanagan et al., 2011). A new interest, at the European level, has recently emerged with regard to demand-side approaches to innovation policy (Edquist and Hommen, 1999) and, more specifically, the use of public demand as an engine for the development and diffusion of innovations. In early 2004 three governments issued a position paper to the European Council calling for the use of public procurement across Europe to spur innovation (Edler and Georghiou, 2007 and French German UK Governments, 2004). This development continued and was manifested in various reports, including the Aho Group Report (Aho et al., 2006). The Aho Group identified several application areas – or grand challenges – where demand-side policies could be used to a larger extent: e-Health, Pharmaceuticals, Energy, Environment, Transport and Logistics, Security and Digital Content (Edler and Georghiou, 2007, p. 951). There seems to be much less talk about innovation procurement in the US than in Europe (Vonortas et al., 2011). We suspect, however, that other fields of US government policy involving “mission agencies”, such as defense or energy, incorporate elements of PPI. Discussion of the differences between European and US practices regarding PPI seems to conflate the use of procurement to meet societal challenges with the use of procurement to meet mission-agency needs. PPI in the US has often been used for the latter and less frequently for the former (Thai, 2001). It has also been used for mission-agency needs in Europe and elsewhere. The aim of this article is to contribute to clarifying the characteristics of (different kinds of) PPI, how PPI has been used, as well as, briefly, its relationship to other public innovation policy instruments. We have therefore decided to base this article firmly on empirical experiences by using a number of examples of PPI. Section 5 contains six case descriptions of PPI. Before that, the context for PPI is presented in Section 2. A few definitions that are necessary to structure and characterize the cases are introduced in Section 3. The methodology and the dimensions of the cases are found in Section 4, as is a detailed summary of the case descriptions (Table 2). The conclusions and policy implications are addressed in Section 6.

Using Public Procurement for Innovation (PPI) is to a large extent a matter of identifying human needs and societal problems that are not solved at the present time. These problems are often related to “grand challenges” where costs are very large. Addressing a “whole” grand challenge by a single instrument is normally impossible. Therefore, making the mitigation of those grand challenges manageable requires them to be reflected in more delimited policies. The cases included here are just a few examples of how these grand challenges can be translated into demand-driven policies, and how PPI policies can partially help to mitigate them. In this article we have defined PPI, shown the main stages in which PPI occurs, introduced a classification of different types of PPI and illustrated them with six cases. We now present the conclusions and policy implications emanating from the case studies in combination with the conceptual framework.