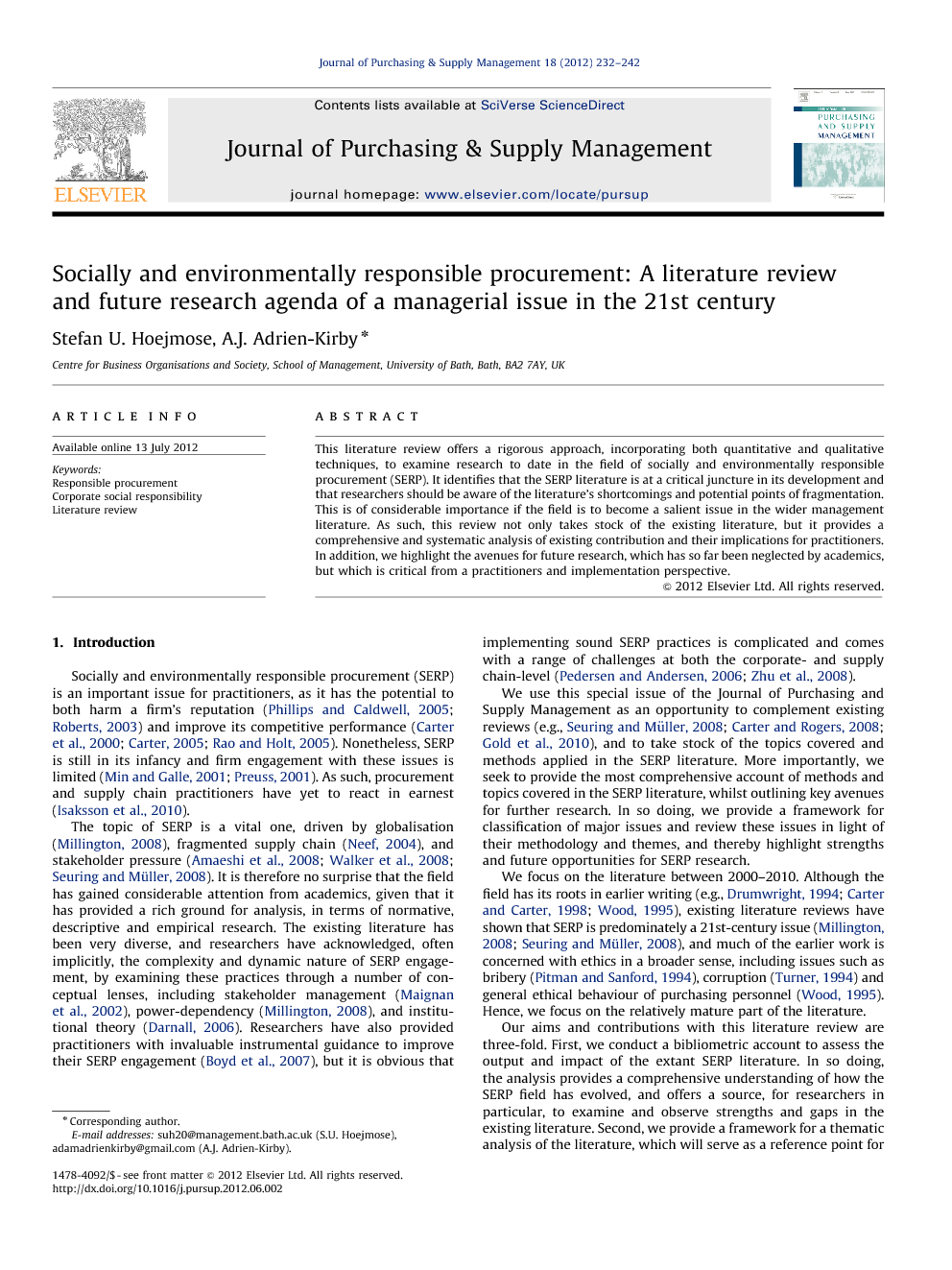 This literature review offers a rigorous approach, incorporating both quantitative and qualitative techniques, to examine research to date in the field of socially and environmentally responsible procurement (SERP). It identifies that the SERP literature is at a critical juncture in its development and that researchers should be aware of the literature's shortcomings and potential points of fragmentation. This is of considerable importance if the field is to become a salient issue in the wider management literature. As such, this review not only takes stock of the existing literature, but it provides a comprehensive and systematic analysis of existing contribution and their implications for practitioners. In addition, we highlight the avenues for future research, which has so far been neglected by academics, but which is critical from a practitioners and implementation perspective.

Socially and environmentally responsible procurement (SERP) is an important issue for practitioners, as it has the potential to both harm a firm's reputation (Phillips and Caldwell, 2005; Roberts, 2003) and improve its competitive performance (Carter et al., 2000, Carter, 2005 and Rao and Holt, 2005). Nonetheless, SERP is still in its infancy and firm engagement with these issues is limited (Min and Galle, 2001 and Preuss, 2001). As such, procurement and supply chain practitioners have yet to react in earnest (Isaksson et al., 2010). The topic of SERP is a vital one, driven by globalisation (Millington, 2008), fragmented supply chain (Neef, 2004), and stakeholder pressure (Amaeshi et al., 2008, Walker et al., 2008 and Seuring and Müller, 2008). It is therefore no surprise that the field has gained considerable attention from academics, given that it has provided a rich ground for analysis, in terms of normative, descriptive and empirical research. The existing literature has been very diverse, and researchers have acknowledged, often implicitly, the complexity and dynamic nature of SERP engagement, by examining these practices through a number of conceptual lenses, including stakeholder management (Maignan et al., 2002), power-dependency (Millington, 2008), and institutional theory (Darnall, 2006). Researchers have also provided practitioners with invaluable instrumental guidance to improve their SERP engagement (Boyd et al., 2007), but it is obvious that implementing sound SERP practices is complicated and comes with a range of challenges at both the corporate- and supply chain-level (Pedersen and Andersen, 2006 and Zhu et al., 2008). We use this special issue of the Journal of Purchasing and Supply Management as an opportunity to complement existing reviews (e.g., Seuring and Müller, 2008 and Carter and Rogers, 2008; Gold et al., 2010), and to take stock of the topics covered and methods applied in the SERP literature. More importantly, we seek to provide the most comprehensive account of methods and topics covered in the SERP literature, whilst outlining key avenues for further research. In so doing, we provide a framework for classification of major issues and review these issues in light of their methodology and themes, and thereby highlight strengths and future opportunities for SERP research. We focus on the literature between 2000–2010. Although the field has its roots in earlier writing (e.g., Drumwright, 1994, Carter and Carter, 1998 and Wood, 1995), existing literature reviews have shown that SERP is predominately a 21st-century issue (Millington, 2008 and Seuring and Müller, 2008), and much of the earlier work is concerned with ethics in a broader sense, including issues such as bribery (Pitman and Sanford, 1994), corruption (Turner, 1994) and general ethical behaviour of purchasing personnel (Wood, 1995). Hence, we focus on the relatively mature part of the literature. Our aims and contributions with this literature review are three-fold. First, we conduct a bibliometric account to assess the output and impact of the extant SERP literature. In so doing, the analysis provides a comprehensive understanding of how the SERP field has evolved, and offers a source, for researchers in particular, to examine and observe strengths and gaps in the existing literature. Second, we provide a framework for a thematic analysis of the literature, which will serve as a reference point for researchers and practitioners to understand the many drivers, barriers and challenges of implementing SERP. As such, the thematic analysis highlights both the complexity and implications of implementing SERP. Third, we outline strengths and weaknesses of the existing literature, and present a research agenda with a set of recommendations for future research that acknowledges the complexity of SERP and highlights opportunities to respond to practitioners’ needs. This review proceeds as follows. We first describe the method used to collect relevant articles and analyse their content. The review continues with the bibliometric analysis of the literature following procedures described by De Bakker et al. (2005). This is followed by a thematic review, drawing upon theme identification methods as recommended by Laplume et al. (2008) in order to provide a detailed analysis of the key themes of the SERP field. We end our review with a description of the strengths and limitations of the extant literature in order to offer suggestions for future research, which respond to gaps in the literature and the challenges faced by practitioners.

This paper has offered one of the first systematic analyses of the SERP literature, by providing a quantitative and qualitative account of the literature. We have focussed on the first ten years of the 21st century, a time when research into the social and environmental issues in buyer–supplier relationships has intensified. In exploring how the field of SERP has changed, we have acknowledged that the field has received considerable attention. However, we also note that the immaturity of the field produces both great opportunity and some points of caution for future researchers. We note four themes of existing literature: external environment; internal environment; SERP implementation; and performance issues. Researchers have explored particular drivers and barriers to SERP along with the prominent role of codes of conduct in implementing such practices. However, in response to the framework in Fig. 7, scholars have not considered that SERP implementation is the action of the organisation that may not be a direct response to stakeholder pressure but rather one that includes the political processes and available resources within the organisation to implement SERP. Considering these practices internal to the organisation makes some progress in our understanding of how stakeholder pressure for SERP can be translated into action and not into “greenwash”. It also has the potential to tackle the recent academic concern that policies may not be sufficient for SERP implementation. Full-size image (31 K) Fig. 7. A thematic framework of the SERP literature: 2000–2010. Figure options We call for researchers in the SERP field to contribute more to the development and testing of theory rather than to the description of the phenomenon (De Bakker et al., 2005), as well as exploring the complexity involved with SERP. The effect of globalisation on the responsible nature of the buyer–supplier relationship provides opportunities not only for comparative studies between differing institutional contexts but also for collaboration with scholars in other management disciplines, such as international management. Indeed, the commercial trend to seek more financially advantageous trading partnerships abroad presents a greater opportunity to align the fields of SERP and business strategy.