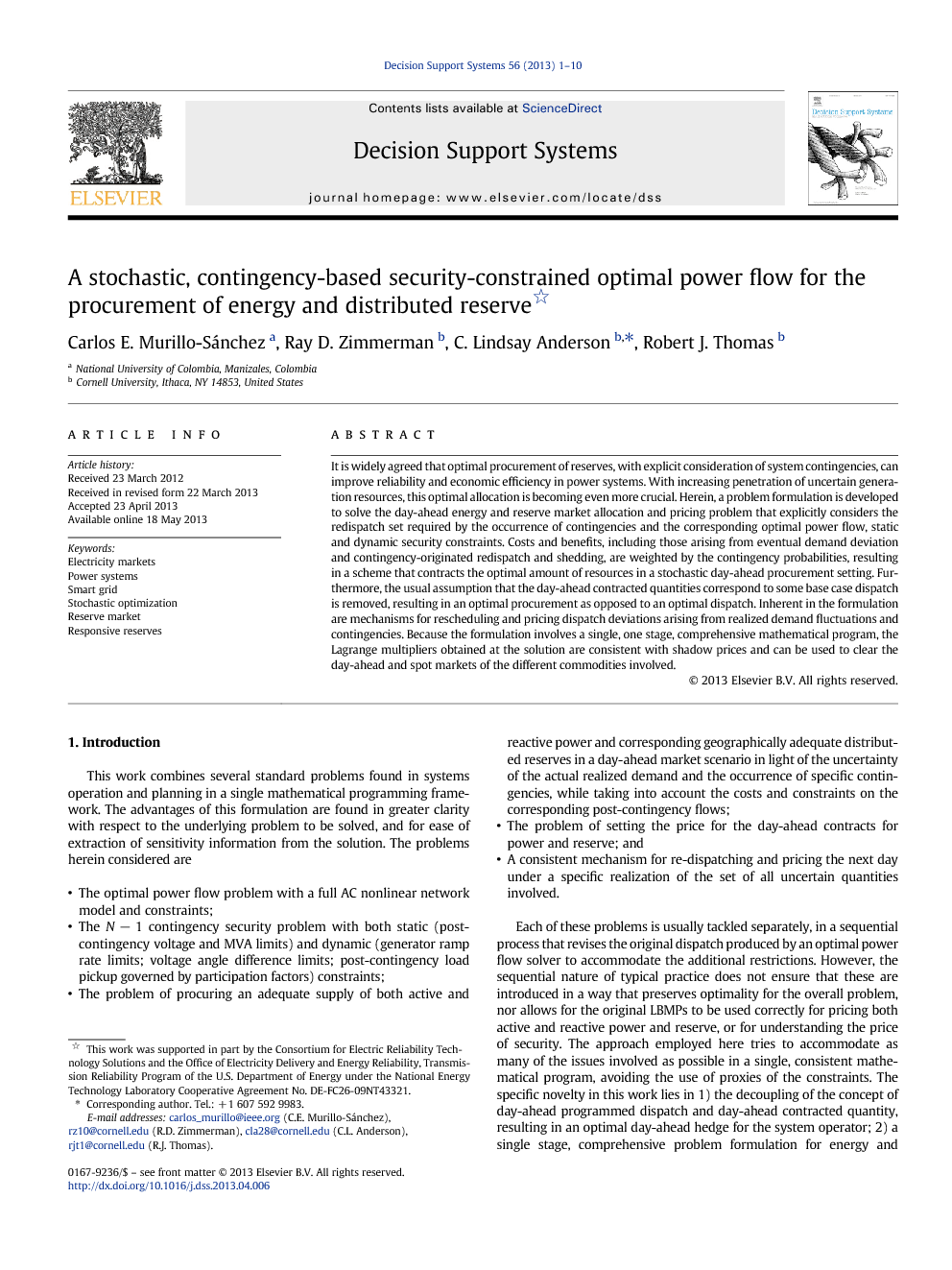 It is widely agreed that optimal procurement of reserves, with explicit consideration of system contingencies, can improve reliability and economic efficiency in power systems. With increasing penetration of uncertain generation resources, this optimal allocation is becoming even more crucial. Herein, a problem formulation is developed to solve the day-ahead energy and reserve market allocation and pricing problem that explicitly considers the redispatch set required by the occurrence of contingencies and the corresponding optimal power flow, static and dynamic security constraints. Costs and benefits, including those arising from eventual demand deviation and contingency-originated redispatch and shedding, are weighted by the contingency probabilities, resulting in a scheme that contracts the optimal amount of resources in a stochastic day-ahead procurement setting. Furthermore, the usual assumption that the day-ahead contracted quantities correspond to some base case dispatch is removed, resulting in an optimal procurement as opposed to an optimal dispatch. Inherent in the formulation are mechanisms for rescheduling and pricing dispatch deviations arising from realized demand fluctuations and contingencies. Because the formulation involves a single, one stage, comprehensive mathematical program, the Lagrange multipliers obtained at the solution are consistent with shadow prices and can be used to clear the day-ahead and spot markets of the different commodities involved.

The formulation proposed in this work is appropriate for clearing a multi-commodity market and preliminary numerical testing with small systems confirms its theoretical advantages. It is now possible to test how true multi-commodity markets with realistic price signals derived from first principles might behave using experimental economics techniques. While detailed physical modeling is retained for accuracy of the solution, at the same time the procurement amount is not artificially bound to be the same as the base case dispatch, thus allowing more freedom in choosing the day-ahead optimal procurement. Whether the optimal procurement differs significantly from the base case dispatch depends on the cost/offer data, as expected. This difference needs to be explored further with data derived from experiments employing human subjects or actual market data in order to quantify the benefit of decoupling the procurement quantity and the base case dispatch. For larger scale implementation, several issues still need to be addressed, among them the robustness and warm start capability of the underlying generalized OPF solver, the specific decomposition and coordination scheme used to separate the problems into smaller units for parallelization purposes, and the integration of the formulation into a unit commitment setting. This last issue may be resolved by employing the basic ideas in [32].