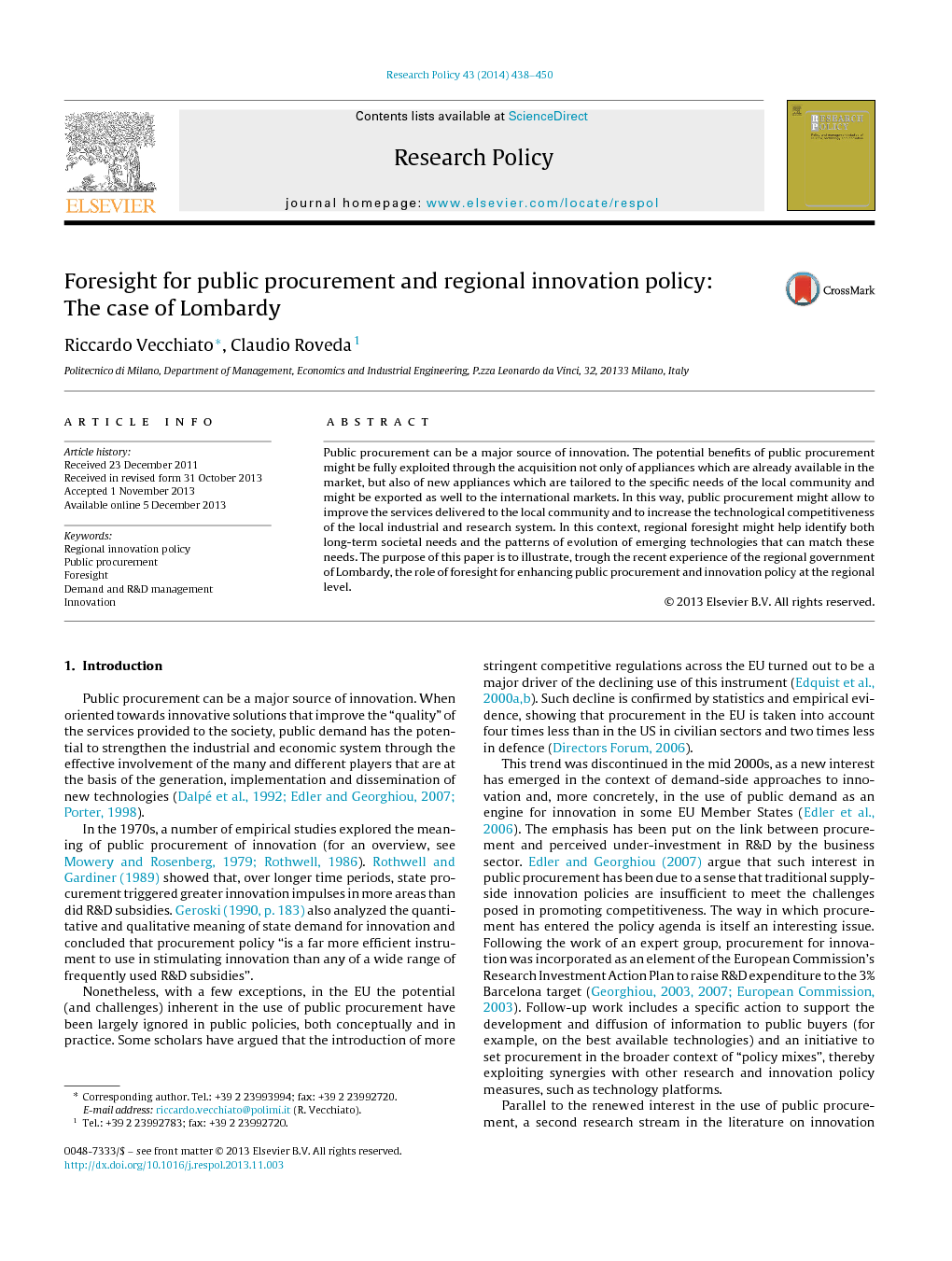 Public procurement can be a major source of innovation. The potential benefits of public procurement might be fully exploited through the acquisition not only of appliances which are already available in the market, but also of new appliances which are tailored to the specific needs of the local community and might be exported as well to the international markets. In this way, public procurement might allow to improve the services delivered to the local community and to increase the technological competitiveness of the local industrial and research system. In this context, regional foresight might help identify both long-term societal needs and the patterns of evolution of emerging technologies that can match these needs. The purpose of this paper is to illustrate, trough the recent experience of the regional government of Lombardy, the role of foresight for enhancing public procurement and innovation policy at the regional level.

Public procurement can be a major source of innovation. When oriented towards innovative solutions that improve the “quality” of the services provided to the society, public demand has the potential to strengthen the industrial and economic system through the effective involvement of the many and different players that are at the basis of the generation, implementation and dissemination of new technologies (Dalpé et al., 1992, Edler and Georghiou, 2007 and Porter, 1998). In the 1970s, a number of empirical studies explored the meaning of public procurement of innovation (for an overview, see Mowery and Rosenberg, 1979 and Rothwell, 1986). Rothwell and Gardiner (1989) showed that, over longer time periods, state procurement triggered greater innovation impulses in more areas than did R&D subsidies. Geroski (1990, p. 183) also analyzed the quantitative and qualitative meaning of state demand for innovation and concluded that procurement policy “is a far more efficient instrument to use in stimulating innovation than any of a wide range of frequently used R&D subsidies”. Nonetheless, with a few exceptions, in the EU the potential (and challenges) inherent in the use of public procurement have been largely ignored in public policies, both conceptually and in practice. Some scholars have argued that the introduction of more stringent competitive regulations across the EU turned out to be a major driver of the declining use of this instrument (Edquist et al., 2000a and Edquist et al., 2000b). Such decline is confirmed by statistics and empirical evidence, showing that procurement in the EU is taken into account four times less than in the US in civilian sectors and two times less in defence (Directors Forum, 2006). This trend was discontinued in the mid 2000s, as a new interest has emerged in the context of demand-side approaches to innovation and, more concretely, in the use of public demand as an engine for innovation in some EU Member States (Edler et al., 2006). The emphasis has been put on the link between procurement and perceived under-investment in R&D by the business sector. Edler and Georghiou (2007) argue that such interest in public procurement has been due to a sense that traditional supply-side innovation policies are insufficient to meet the challenges posed in promoting competitiveness. The way in which procurement has entered the policy agenda is itself an interesting issue. Following the work of an expert group, procurement for innovation was incorporated as an element of the European Commission's Research Investment Action Plan to raise R&D expenditure to the 3% Barcelona target (Georghiou, 2003, Georghiou, 2007 and European Commission, 2003). Follow-up work includes a specific action to support the development and diffusion of information to public buyers (for example, on the best available technologies) and an initiative to set procurement in the broader context of “policy mixes”, thereby exploiting synergies with other research and innovation policy measures, such as technology platforms. Parallel to the renewed interest in the use of public procurement, a second research stream in the literature on innovation and research policy is increasingly emphasizing the importance of regions for innovation and growth. Porter's work on clusters clearly showed how geographical concentrations of competing and cooperating enterprises are linked by social and institutionalized networks that in turn facilitate learning, innovation and competitiveness (Porter, 1990 and Porter, 1998). This work paved the way for the current growing interest in Regional Innovation Systems – RIS (Cooke et al., 2000 and Asheim and Gertler, 2005). The RIS approach emphasizes the shift of innovation policies from the national to the regional level with particular attention to the interactive flows of knowledge between the different components and stakeholders of a regional system. Following this shift, there is a clear need (and opportunity) for appropriate methods and tools, aiming at enhancing the formulation of a regional vision and a regional innovation strategy able to translate this vision into policy action, with respect to all the phases of the “policy cycle” (Georghiou, 2001, Roveda et al., 2004 and Smits and Kuhlmann, 2004). In particular, a tool which is benefiting of growing popularity is ‘Regional Foresight’ (Koschatzky, 2005 and Roveda and Vecchiato, 2008). The main objective of this paper is to link the research streams of public procurement, foresight, and regional innovation policy. We ask: How do policy makers that have responsibility for regional innovation strategy design and use foresight for informing public procurement for innovation? The case of the A3T (Analysis of Application Areas and Technologies) project that has been carried out in the late 2000s and early 2010s by the regional government of Lombardy is very helpful to explore this research question. The A3T project was conceived by the regional government of Lombardy in order to combine public procurement with its research, development and technology innovation (RDTI) strategy, and was based on an exercise of (regional) foresight. The paper is structured as follows. Section 2 briefly reviews the relevant literature on regional foresight and public procurement. Section 3 describes the main challenges (and opportunities) to tackle for carrying out public procurement at the regional level, and the potential role of foresight for overcoming these challenges (and exploiting opportunities). Section 4 illustrates methodology, process and outputs of the A3T project, by focusing on the outcomes of the foresight exercise and its impact on public procurement. Section 5 discusses the general insights and implications for foresight and public procurement for innovation we drew from the A3T project and finally Section 6 outlines future research avenues.

The foresight methodology described in this paper can be useful to provide an effective blueprint for exploiting the inherent benefits and potential of public procurement and for enriching RTDI policy. However, two relevant issues need to be further explored, together with the trade-off between them. The first one refers to the likely direct interest of the proposers of application areas and related pilot projects. This conflict of interest might affect the rules of public procurement in terms of transparency and, in particular, of equal opportunities of access for every market player. There is no doubt it is very difficult to combine these rules with the interest of industrial and research players (Edler, 2008, Edler et al., 2006 and Georghiou, 2007). The second issue regards the fact that better solutions to a given application area might actually be provided by industrial players (national, international) who do not operate in the region. So a dilemma arises: whether to purchase the best solution, wherever it comes from, so favouring the local society as a whole, but not the local industry; or to acquire a sub-optimal solution from local firms, so favouring the development of the local industry at the expense of the society as a whole (Uyarra and Flanagan, 2009). In the case of the A3T project, the possibility of local firms to partner with other scientific players outside the region helped to mitigate this drawback. A number of some more (even if minor) limitations should be pointed out, which are typical of foresight studies. First, in the evaluation phase the experts tend to concentrate their contribution on a specific technology or application area, so paying less attention to its interactions with others and missing the possible synergies and economies of scale. Second, quantitative information are not always available to the experts. There is a validity and generalization problem regarding the methodology developed for the A3T project and the use of public procurement for promoting and supporting innovation at a regional scale. As we earlier suggested, the size of the region (in terms of its community as a lead market for innovation) has a crucial role: there are not many regions in the EU which are as large and advanced as Lombardy. However, the number of these regions is not marginal; it is enough to mention, as an example, the Four Motors of Europe (i.e. Lombardy, Rhone-Alpes in France, Catalunia in Spain and Baden-Württemberg in Germany). We thus think that the A3T project (and its methodology) is replicable in these leading European regions. Future research might focus on exploring and implementing foresight for supporting public procurement of innovation and assessing its impacts on competitiveness at the national scale. The solution of the main problems that are inherent in the methodology we applied in the A3T project, requires considerable efforts, but still offers relevant opportunities for empirical investigation. A more robust theoretical understanding of the use of foresight for supporting public procurement of innovation could be gained as well, by means of literal and theoretical replications (Yin, 2003).