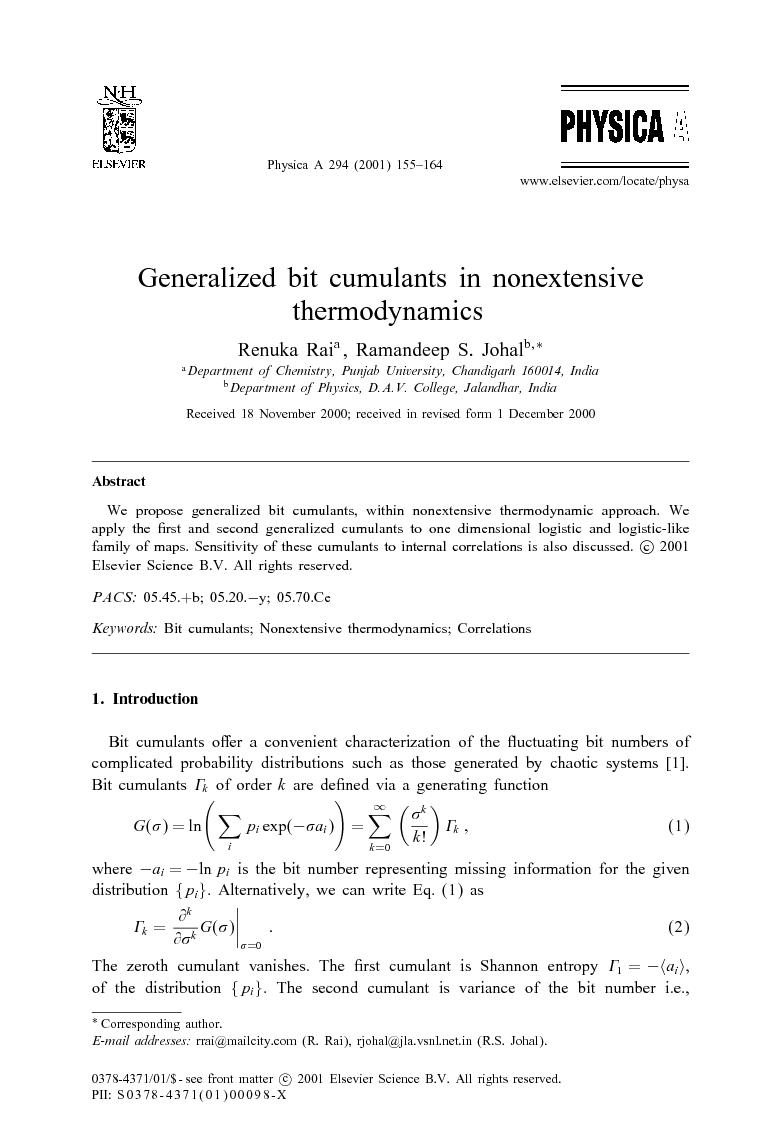 We propose generalized bit cumulants, within nonextensive thermodynamic approach. We apply the first and second generalized cumulants to one dimensional logistic and logistic-like family of maps. Sensitivity of these cumulants to internal correlations is also discussed.

Bit cumulants offer a convenient characterization of the fluctuating bit numbers of complicated probability distributions such as those generated by chaotic systems [1]. Bit cumulants Γk of order k are defined via a generating function equation(1) View the MathML source where View the MathML source is the bit number representing missing information for the given distribution {pi}. Alternatively, we can write Eq. (1) as equation(2) View the MathML source The zeroth cumulant vanishes. The first cumulant is Shannon entropy Γ1=−〈ai〉, of the distribution {pi}. The second cumulant is variance of the bit number i.e., Γ2=〈ai2〉−〈ai〉2. From thermodynamic point of view, Γ2 is of major importance. It is a generalization of heat capacity and measures the variance of bit number. It has been discussed [2] in the context of critical behaviour in equilibrium and non-equilibrium phase transitions. An important property of Γk is that it is additive with respect to statistically independent or uncorrelated subsystems. Thus, for a composite system (A+B) whose joint probabilities factorize as pij(A+B)=pi(A).pj(B), we have Γk(A+B)=Γk(A)+Γk(B). This extensive feature of the standard bit cumulants makes them sensitive to building up of internal correlations of physical systems such as those appearing near the critical point of equilibrium phase transitions. Our purpose here is to generalize the bit cumulants within nonextensive thermostatistics of Tsallis [3]. The latter formalism which is a generalization of Boltzmann–Gibbs formalism, is based on a nonlogarithmic entropy equation(3) View the MathML source where |1−q| is a measure of nonextensivity of the entropy, i.e., its feature of nonadditivity with respect to entropies of statistically independent subsystems. So some kind of correlation is induced by nonextensivity. In fact, thermodynamics based on maximization of Tsallis entropy is applicable to such systems as are characterized by one of the following: long range interactions, long term memory effects or multifractal-like phase space. It has found a number of significant applications such as Hamiltonian systems with long range interactions [4], two-dimensional pure electron plasma turbulence [5] and [6], granular systems [7], anomalous diffusion [8], [9] and [10], fully developed turbulence [11] and [12], nonlocal correlations in quantum entanglement [13] and many other systems. In the Boltzmann–Gibbs formalism, some of these systems could be regarded as nonequilibrium systems, though with a quasi-stationary state. Particularly, nonextensivity plays important role for low-dimensional dissipative systems at the onset of chaos or at bifurcation points [14], [15] and [16]. Recently, a nonextensive thermostatistics based on multifractal formalism was developed by the authors which related degree of nonextensivity (1−q) to the precision of calculation [17] and [18]. Thus, there is relevance to discuss the alternative tool of bit cumulants to characterize probability distributions within nonextensive approach. This paper is organized as follows: in Section 2, we present generalized version of bit cumulants and apply the first and second cumulant to logistic-like family of maps. In Section 3, we discuss a recent application of generalized second bit cumulant. Finally, in Section 4, we explicitly show how the sensitivity to internal correlations is modified by adopting nonextensive measure of entropy and bit variance.