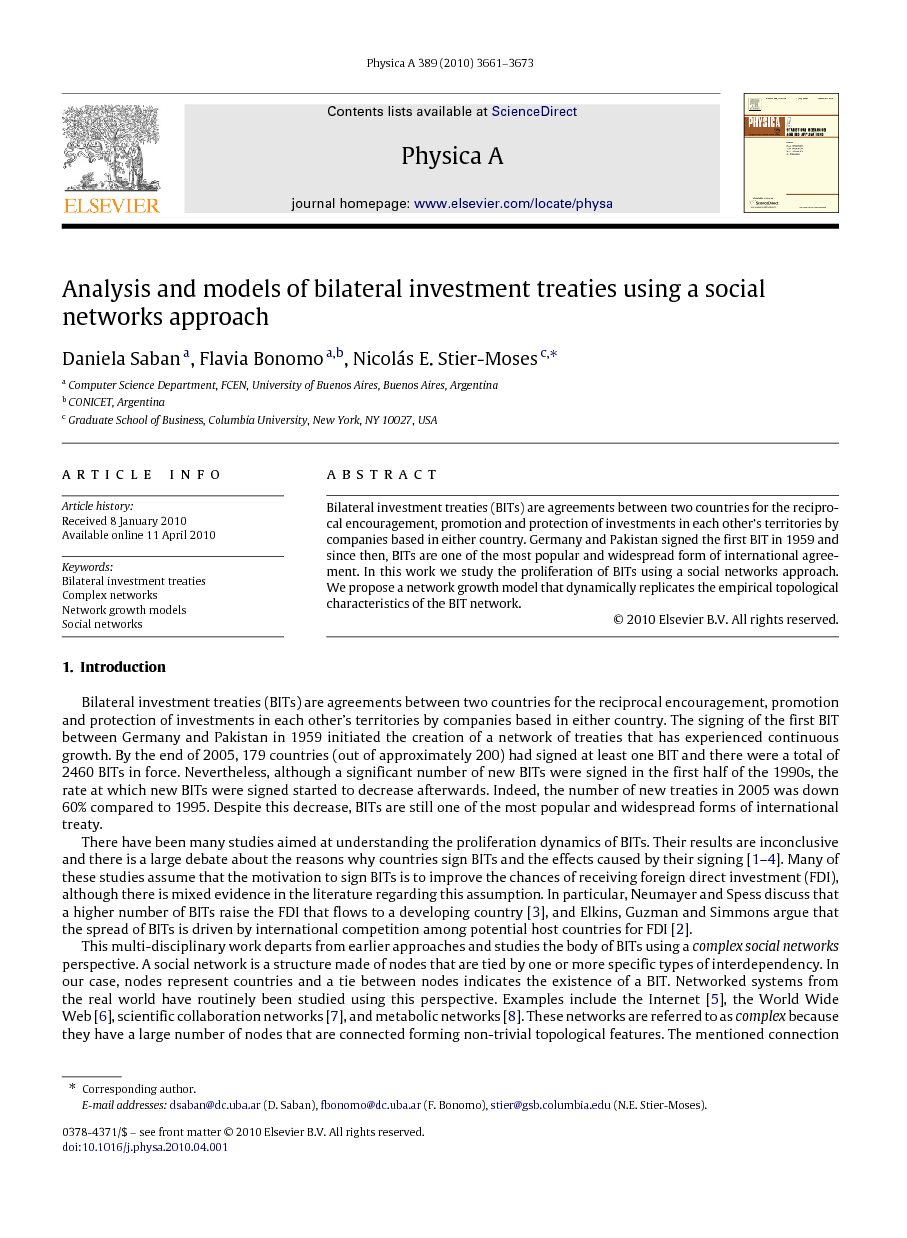 Bilateral investment treaties (BITs) are agreements between two countries for the reciprocal encouragement, promotion and protection of investments in each other’s territories by companies based in either country. Germany and Pakistan signed the first BIT in 1959 and since then, BITs are one of the most popular and widespread form of international agreement. In this work we study the proliferation of BITs using a social networks approach. We propose a network growth model that dynamically replicates the empirical topological characteristics of the BIT network.

Bilateral investment treaties (BITs) are agreements between two countries for the reciprocal encouragement, promotion and protection of investments in each other’s territories by companies based in either country. The signing of the first BIT between Germany and Pakistan in 1959 initiated the creation of a network of treaties that has experienced continuous growth. By the end of 2005, 179 countries (out of approximately 200) had signed at least one BIT and there were a total of 2460 BITs in force. Nevertheless, although a significant number of new BITs were signed in the first half of the 1990s, the rate at which new BITs were signed started to decrease afterwards. Indeed, the number of new treaties in 2005 was down 60% compared to 1995. Despite this decrease, BITs are still one of the most popular and widespread forms of international treaty. There have been many studies aimed at understanding the proliferation dynamics of BITs. Their results are inconclusive and there is a large debate about the reasons why countries sign BITs and the effects caused by their signing [1], [2], [3] and [4]. Many of these studies assume that the motivation to sign BITs is to improve the chances of receiving foreign direct investment (FDI), although there is mixed evidence in the literature regarding this assumption. In particular, Neumayer and Spess discuss that a higher number of BITs raise the FDI that flows to a developing country [3], and Elkins, Guzman and Simmons argue that the spread of BITs is driven by international competition among potential host countries for FDI [2]. This multi-disciplinary work departs from earlier approaches and studies the body of BITs using a complex social networks perspective. A social network is a structure made of nodes that are tied by one or more specific types of interdependency. In our case, nodes represent countries and a tie between nodes indicates the existence of a BIT. Networked systems from the real world have routinely been studied using this perspective. Examples include the Internet [5], the World Wide Web [6], scientific collaboration networks [7], and metabolic networks [8]. These networks are referred to as complex because they have a large number of nodes that are connected forming non-trivial topological features. The mentioned connection patterns are neither purely regular nor purely random. Since the 1950s, several random network growth processes have been proposed with the goal of emulating the topology of a complex network. The first of these is the random graph model of Erdős and Rényi, which connects every pair of nodes uniformly and independently with probability pp [9]. Running this process on nn nodes creates a graph ER(n,p)ER(n,p) that has approximately pn(n−1)/2pn(n−1)/2 edges distributed randomly. With the advent of more powerful computers, the empirical analysis of large, real-world networks has shown that many of them share some fundamental structural properties, such as small-world effect, high clustering coefficient and power-law degree distribution. With these results in hand, scientists started to question whether ERER graphs gave rise to networks similar to those generated by real-world complex systems. The study of the social network generated by the BITs departs from related studies in the literature for the following main reasons. First, the full history of the network is compact and available to us. While most works on real-world networks study the network evolution process over a short period of time, typically no more than 10 years, we will study the evolution process from birth to actuality, covering a period of 45 years. Second, while most networks studied in the complex networks literature are large and sparse with potentially infinite growth [10], [6] and [5], the BIT network is small and dense, and has almost reached its limit of growth at node level. The fact that the network is small will allow us to study the local properties of the network such as its cohesiveness (as given by the clique or quasi-clique numbers). An analysis of these properties is not present in most of the existing literature. Third, traditional papers from the literature of social networks view them as static graphs, and concentrate their attention on the analysis of structural properties of snapshots at different times. We will study the BITs using a dynamic perspective, paying special attention to growth processes that generate networks with similar properties [7]. The main two conclusions that can be drawn from our study are that a network growth process based on a combination of preferential attachment and the fitness model is a good fit for the BIT network, and that the reason why less countries signed new BITs in the period 1995–2005 is the existence of some saturation whereby countries had already signed the BITs that were most important to them. There are other networks representing an interaction between countries that have been studied from a social networks perspective. To cite the most relevant, [11] studies the topology of the world trade web, defined by international import/export trade relationships. In follow up work, [12] focuses on a directed version of the network and looks at its evolution. The paper [13] explores the complex relationships between countries in the Eurovision Song Contest, by creating a dynamic network from voting data over a ten-year period. The evolution in both of these application domains allows for the relationships to change arbitrarily over time. This means that edges could be added or deleted from one year to the next. On the contrary, our network only admits the addition of edges: once a BIT is signed, it remains signed forever. This paper is organized as follows. Section 2 starts by describing the dataset and laying out the groundwork by reporting on the structural properties of the BIT network. Section 3 discusses the evolution of BITs over time and explains the difference between the BIT network and the most-commonly studied big and sparse networks. In Section 4, we propose the models that capture the main aspects of the BIT network and measure the goodness-of-fit using topological characteristics. Finally, we conclude in Section 5 with some opportunities for further work.

We have presented a detailed study of the BIT network using the framework of social networks. The most important features that make this network different from others studied in the literature is that our network is small, dense, and shows signs of saturation. The techniques we have put forward could also be relevant to other small networks with these properties. Our empirical observations on the BIT network in the period 1959–2005 have demonstrated that it shows the small-world property at all times and the average path length is almost constant. On the other hand, the clustering coefficient and the degree distribution vary over time. While the clustering coefficient is lower than expected for an ERER graph with the same number of nodes and a similar number of edges at an early stage, from 1985 onward we have seen that it is considerably higher, a property which is shared by most real-world networks. Although the node degree distribution is skewed right and has a long tail across the whole period, it changes from approximately power-law in 1975 and 1990 to exponential in 2000 and 2005. We have provided pieces of evidence that support that this change is due to signs of saturation. While most previous work on the proliferation of bilateral investment treaties has focused on the correlation between BITs and FDI, our analysis suggests that the signing of treaties can be explained by a generalized preferential attachment process. Our model is based on one proposed by Barabási et al. to detect signs of preferential attachment at both new node and internal edge levels [7]. The new modeling elements include considering three distinct phases and classifying nodes as developed or developing to force the network to be partially bipartite. These elements have been found to be a fundamental driver of the BITs evolution since otherwise the model provides clique numbers that do not match empirical observations. Finally, we have also explored a procedure that makes the edge creation process endogenous. This was used to provide evidence supporting the existence of saturation because countries have already signed most BITs that interest them. This work is the first to propose the use of quasi-cliques as an instrument to evaluate differences in the topology of random graphs. Quasi-cliques have provided us with concrete evidence that different processes may generate graphs with very similar global structural properties, such as average path length, clustering coefficient and degree distribution, and yet can still have notorious differences in their local structure. The models introduced in this work are only a first step towards more complete models of the BIT network. Below, we list some elements left for future work. (a) The fitness value of a country could vary over time to reflect changing policies and political situations. (b) Fitness values for each country were drawn from a probability distribution. Instead, one could try to explain the fitness value using relevant explanatory variables. (c) Incorporate prohibited dyads, which certainly exist in the real world. (d) Multilateral Investment Treaties can also be considered using hypergraphs. (e) We have neglected to examine whether BITs were ratified. Adding this data could be used to gauge the interest that both countries have in the BIT. Acknowledgements We thank Pablo Pinto for motivating us to pursue this research and for all his knowledgeable advice, and Matías Graña and Pablo Jacovkis for valuable suggestions that improved this work. The first and second authors acknowledge support from ANPCyT PICT-2007-00518 and 00533, Argentina. The second author was also partially supported by UBACyT Grants X069 and X606, Argentina. Finally, the third author was partially supported by the Columbia University Center for International Business Education and Research.