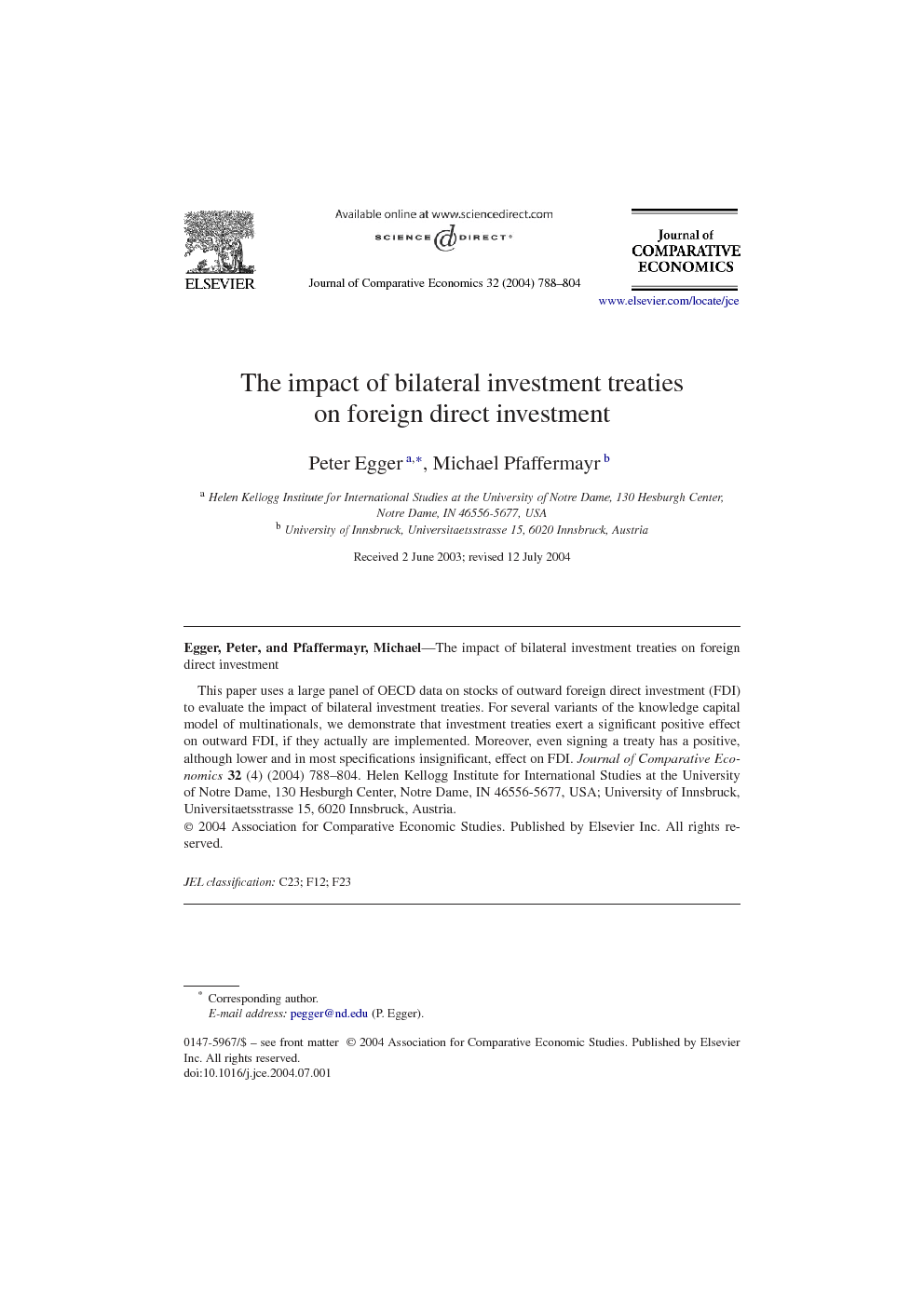 This paper uses a large panel of OECD data on stocks of outward foreign direct investment (FDI) to evaluate the impact of bilateral investment treaties. For several variants of the knowledge capital model of multinationals, we demonstrate that investment treaties exert a significant positive effect on outward FDI, if they actually are implemented. Moreover, even signing a treaty has a positive, although lower and in most specifications insignificant, effect on FDI. Journal of Comparative Economics32 (4) (2004) 788–804.

The first bilateral investment treaty (BIT) was signed between Germany and Pakistan in 1959 and came into force in 1962. Up to 1999, another 1856 BITs have been signed and further BITs are expected in the future (United Nations, 2000). BITs are designed to facilitate foreign direct investment (FDI) from economies with abundant capital and skilled labor, i.e., mainly OECD countries, to the less developed economies. Many of the existing BITs between the current OECD economies involve one old and one new OECD member. For example, the Czech Republic, Hungary, Poland, and the Slovak Republic concluded BITs with old OECD members in the early 1990s and then joined the OECD afterwards. The theoretical literature on the expected impact of BITs on FDI is not conclusive. Hoekman and Saggi (2000) argue that, due to some differences in national rules, BITs may be the source of higher transaction costs and uncertainty from a firm's perspective. Although this point would support an argument for a harmonized global BIT, i.e., a multilateral investment treaty, these authors concede that differences in cultural, political, and general business climate characteristics are more important determinants of the transaction costs associated with FDI. Formally, BITs regulate FDI-related issues such as admission, treatment, expropriation, and the settlement of disputes at the bilateral level. Ex ante, they establish transparency about risk and, thus, reduce the risk of investing in a country. Ex post, BITs ensure that firms have certain rights, e.g., property rights, and preserve them from expropriation.1 According to the Fact Sheet on the US bilateral investment treaty program released by the Office of Investment Affairs of the Bureau of Economic Business Affairs, the program's basic aims are the following.2 First, BITs should protect US FDI in those countries where US investors' rights are not protected through existing agreements. Second, they should encourage host countries to adopt market-oriented domestic policies that treat private investment fairly. Third, they should support the development of international law standards consistent with these objectives.3 In some sense, BITs extend an investor's property rights and regulate how host governments must arbitrate disputes covered by the treaty. Further, BITs define what is deemed expropriation, formulate how and under which conditions property may be expropriated, and determine how quickly and comprehensively investors must be compensated. The UNCTAD (1998) study summarizes the following features of BITs, which are designed to attract FDI. First, BITs facilitate and encourage bilateral FDI between the contracting parties. To achieve this goal, most BITs guarantee foreign investors fair and equitable, non-discriminatory, most-favored-nation and national treatment in addition to access to international means of dispute resolution. Moreover, BITs usually provide legal protection of both physical and intellectual properties under international law and investment guarantees with a special focus on the transfer of funds and expropriation, including the rules of compensation. In this way, they facilitate insurance and reduce insurance premia. Some BITs provide even more reliable and transparent conditions for investors than do national laws. Hence, they allow transition economies to provide guarantees for foreign investors while undertaking national legislative reforms at the same time.4 From this perspective, BITs reduce the costs of investing abroad, including risk premia, so that FDI should increase if new BITs are implemented. In addition, BITs should make new inward investment attractive and also reduce the likelihood of investment outflows. The theoretical trade literature incorporates multinational enterprises (MNEs) in trade models characterized by increasing returns and considers both horizontal MNEs and vertical MNEs. Horizontal MNEs have production facilities in both the parent and host countries (Markusen, 1984, and Markusen and Venables, 1998 and Markusen and Venables, 2000) and tend to be found in the similarly endowed economies, e.g., within the OECD.5 Vertical MNEs unbundle completely the headquarter services from production to exploit factor cost differentials Helpman, 1984 and Helpman and Krugman, 1985. Therefore, vertical FDI tends to occur in dissimilar economies, e.g., between the OECD and the developing countries. Carr et al. (2001), Markusen (2002), and Markusen and Maskus (2002) develop knowledge capital models of MNEs in which both horizontal and vertical activities arise endogenously. In a panel econometric framework, Hallward-Driemeier (2003) finds little evidence of any positive impact of BITs on FDI. A study based on cross-section analysis by UNCTAD (1998) supports only a weak nexus between signing BITs and changes in FDI flows and stocks. By contrast, United Nations (2000) view BITs as the most important instrument for protecting FDI at the international level. In this paper, we undertake an empirical assessment of the impact of BITs on FDI stocks. We estimate several variants of the knowledge capital model of MNEs using the largest available panel of outward FDI stocks provided by OECD, which contains FDI of OECD countries into both OECD and non-OECD economies. Information on BITs, both signed and ratified, is available from the World Bank. We find a significant and positive impact of ratified BITs throughout. The estimated effect of BITs on real outward FDI stocks amounts to about 30% in the preferred specification. Additionally, we look at whether simply signing a BIT will have a positive anticipation effect. We find a positive impact from signing a treaty, although its magnitude is smaller than that associated with the ratification of an existing treaty. However, the estimated anticipation effect is insignificant, in most specifications, leading us to conclude that the advantages to simply signing a BIT are inconsequential. The next section provides details on the econometric specification and discusses the construction of the variables. In Section 3, we present the main estimation results together with extensive sensitivity analysis. The last section concludes with a summary of the empirical findings.

In the last four decades, the number of BITs signed has been large and the pace is accelerating. We investigate whether these treaties are signed only for political reasons or whether they remove important economic obstacles. To do so, we concentrate on FDI and analyze whether bilateral real outward FDI stocks rise as new treaties are signed or implemented. Hence, we hypothesize that bilateral investment treaties reduce barriers to FDI. Embedded in alternative specifications of the knowledge capital model, we estimate the ratification effect of BITs. In addition, we look at potential anticipation effects after signing and before ratifying a BIT. We use the largest available set of bilateral outward FDI stock data from the OECD and a comprehensive data set on bilateral investment treaties from the World Bank. We control for the importance of time-invariant and common-cycle fixed effects as well as for the potential influence of outliers and use heteroskedasticity robust estimates. We find an overall BIT ratification effect on FDI of about 30% in the preferred specifications. Moreover, if it has an impact at all, signing a treaty exerts a significantly lower impact on real FDI stocks. Our results are robust to alternative measures of relative factor endowment differences, to the impact of trading blocs such as EU or NAFTA, and to infrastructure endowments. In all our estimated specifications, BITs exert a positive and significant effect on real stocks of outward FDI, with a lower bound of 15%.