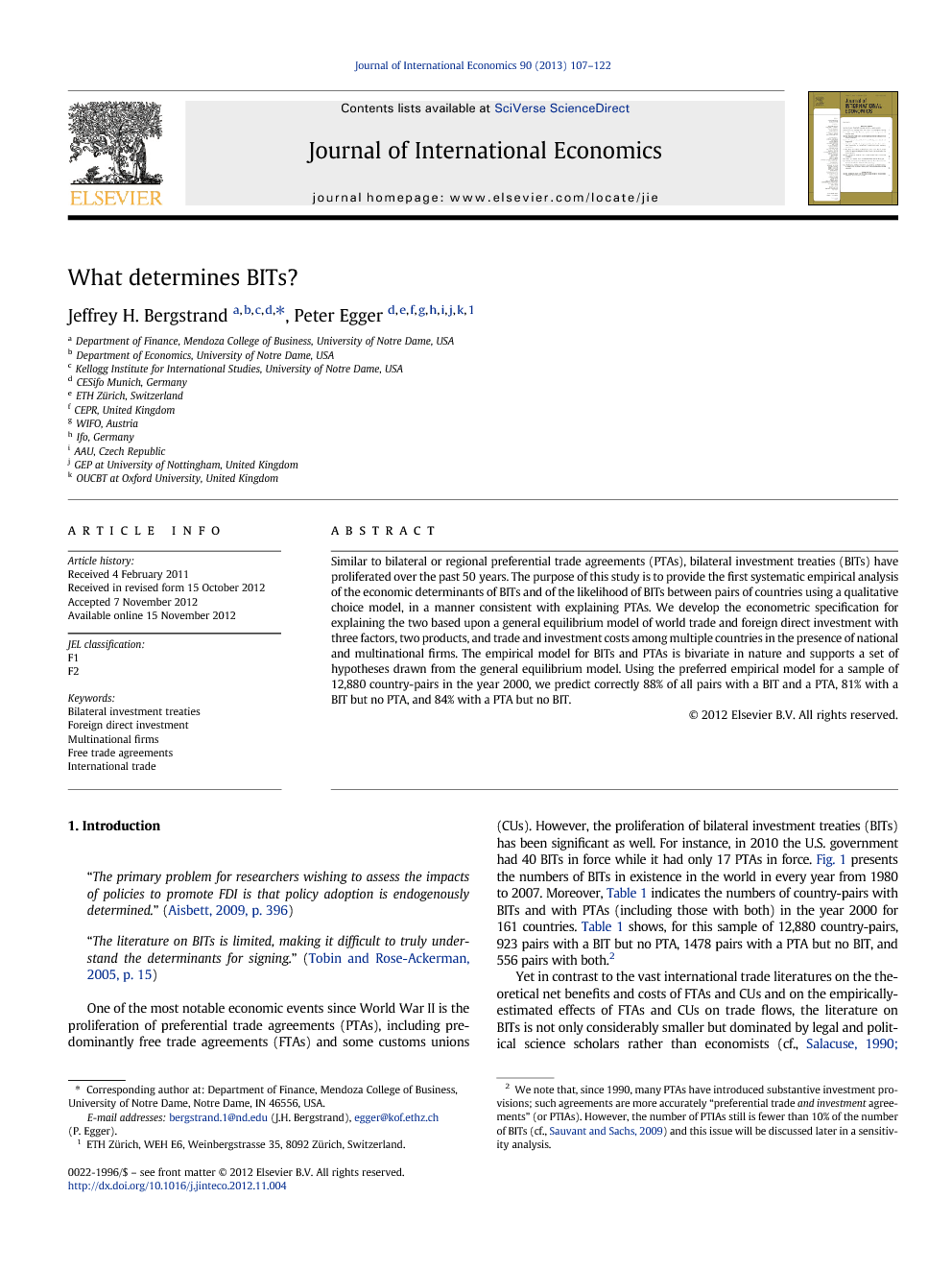 Similar to bilateral or regional preferential trade agreements (PTAs), bilateral investment treaties (BITs) have proliferated over the past 50 years. The purpose of this study is to provide the first systematic empirical analysis of the economic determinants of BITs and of the likelihood of BITs between pairs of countries using a qualitative choice model, in a manner consistent with explaining PTAs. We develop the econometric specification for explaining the two based upon a general equilibrium model of world trade and foreign direct investment with three factors, two products, and trade and investment costs among multiple countries in the presence of national and multinational firms. The empirical model for BITs and PTAs is bivariate in nature and supports a set of hypotheses drawn from the general equilibrium model. Using the preferred empirical model for a sample of 12,880 country-pairs in the year 2000, we predict correctly 88% of all pairs with a BIT and a PTA, 81% with a BIT but no PTA, and 84% with a PTA but no BIT.

The purpose of this study was to develop an econometric model that explains the “economic” determinants of BITs — at the same time as explaining PTAs. In the spirit of Baier and Bergstrand (2004), which explained PTAs in the context of a general equilibrium model of world trade with exporters, the model in this study is the first econometric model to explain BITs (along with PTAs) in the context of an explicit general equilibrium model of world production, consumption, trade, and FDI with national and multinational firms in multiple countries. The main conclusions are that the potential welfare gains from and likelihood of a BIT (PTA) between a country-pair are higher: (1) the larger and more similar in GDP are the country-pair; (2) the closer in distance are the two countries; (3) if the two countries are not adjacent (are adjacent) and do not share (do share) a common language; (4) the higher (lower) the degrees of political stability and of expropriation risk of the pair; and (5) the relatively more skilled labor abundant (the wider the relative K/U ratio of) the pair. These factors have economically and statistically significant effects on the probability of a BIT (PTA). While there exist choices of cutoff probabilities in determining the percent correctly predicted of the alternative outcomes, using the unconditional probabilities the preferred empirical model predicts correctly more than 80% of country-pairs with a BIT and PTA, with a BIT but no PTA, and with a PTA but no BIT. Consequently, the model provides a benchmark for incorporating other economic – and especially political science and legal variables – into understanding the determinants of BITs and PTAs.