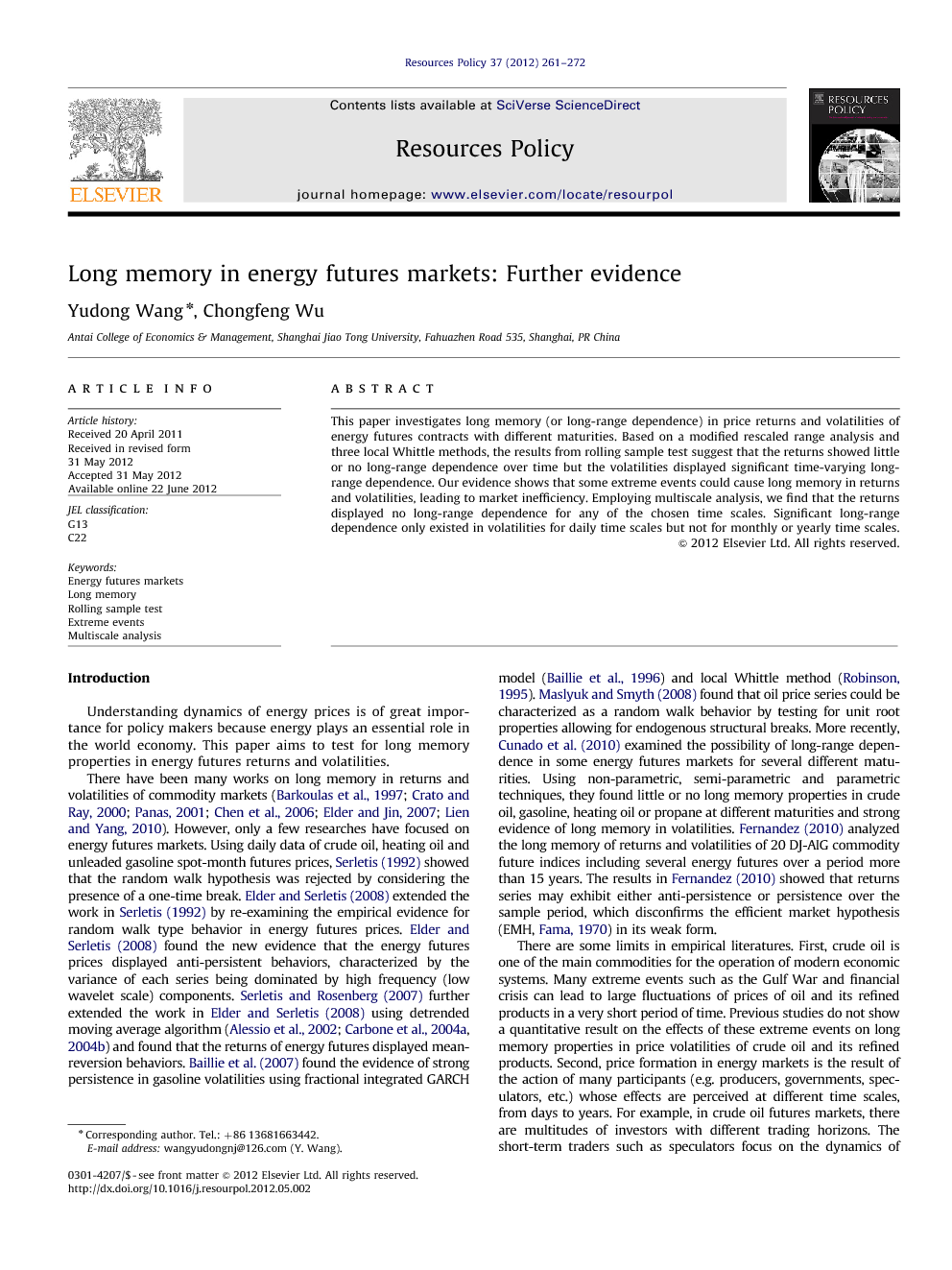 Understanding dynamics of energy prices is of great importance for policy makers because energy plays an essential role in the world economy. This paper aims to test for long memory properties in energy futures returns and volatilities. There have been many works on long memory in returns and volatilities of commodity markets (Barkoulas et al., 1997, Crato and Ray, 2000, Panas, 2001, Chen et al., 2006, Elder and Jin, 2007 and Lien and Yang, 2010). However, only a few researches have focused on energy futures markets. Using daily data of crude oil, heating oil and unleaded gasoline spot-month futures prices, Serletis (1992) showed that the random walk hypothesis was rejected by considering the presence of a one-time break. Elder and Serletis (2008) extended the work in Serletis (1992) by re-examining the empirical evidence for random walk type behavior in energy futures prices. Elder and Serletis (2008) found the new evidence that the energy futures prices displayed anti-persistent behaviors, characterized by the variance of each series being dominated by high frequency (low wavelet scale) components. Serletis and Rosenberg (2007) further extended the work in Elder and Serletis (2008) using detrended moving average algorithm (Alessio et al., 2002, Carbone et al., 2004a and Carbone et al., 2004b) and found that the returns of energy futures displayed mean-reversion behaviors. Baillie et al. (2007) found the evidence of strong persistence in gasoline volatilities using fractional integrated GARCH model (Baillie et al., 1996) and local Whittle method (Robinson, 1995). Maslyuk and Smyth (2008) found that oil price series could be characterized as a random walk behavior by testing for unit root properties allowing for endogenous structural breaks. More recently, Cunado et al. (2010) examined the possibility of long-range dependence in some energy futures markets for several different maturities. Using non-parametric, semi-parametric and parametric techniques, they found little or no long memory properties in crude oil, gasoline, heating oil or propane at different maturities and strong evidence of long memory in volatilities. Fernandez (2010) analyzed the long memory of returns and volatilities of 20 DJ-AIG commodity future indices including several energy futures over a period more than 15 years. The results in Fernandez (2010) showed that returns series may exhibit either anti-persistence or persistence over the sample period, which disconfirms the efficient market hypothesis (EMH, Fama, 1970) in its weak form. There are some limits in empirical literatures. First, crude oil is one of the main commodities for the operation of modern economic systems. Many extreme events such as the Gulf War and financial crisis can lead to large fluctuations of prices of oil and its refined products in a very short period of time. Previous studies do not show a quantitative result on the effects of these extreme events on long memory properties in price volatilities of crude oil and its refined products. Second, price formation in energy markets is the result of the action of many participants (e.g. producers, governments, speculators, etc.) whose effects are perceived at different time scales, from days to years. For example, in crude oil futures markets, there are multitudes of investors with different trading horizons. The short-term traders such as speculators focus on the dynamics of futures prices very frequently. They concentrate on the analysis of daily data of futures prices, reevaluate the market situation and execute the transactions at a high frequency. The minor variations of prices may also make them trade with a large volume. However, the long-term traders such as producers do not need to focus on the market every minute. They concentrate on the market long-term trend, analyze the low frequency data such as weekly and monthly prices and execute transactions when the large price movements indeed happen over a long trading horizon. However, very few empirical studies consider the long memory properties under the multiscale environment. Third, since the market demand–supply fundamental changes over time, long memory of crude oil returns and volatilities may also change over time. However, besides the recent work in Fernandez (2010) and Wang and Liu (2010), very few empirical studies take the time-varying situations into account or investigate the evolution of long memory over time. In this paper, we further extend the works in existing literatures by examining persistence in returns and volatilities of crude oil, heating oil, gasoline and propane futures for different maturities. Our contributions are as follows. First, besides Lo's (1991) modified rescaled range analysis and local Whittle (LW) methods (Robinson, 1995) used in many literatures such as Cunado et al. (2010), we examine long memory in returns and volatilities employing two new developed semi-parametric methods, exact local Whittle (ELW) method (Phillips and Shimotsu, 2005) and feasible local Whittle method (Shimotsu, 2010) which are superior to LW. Second, employing rolling sample tests, we found little evidence of long memory in return series but strong evidence of time-varying long memory in volatility series. Some abrupt increase or decrease of the degree of long memory can be related to several occasional events. Moreover, we found the evidence that some extreme events could result in significant long memory in energy returns and volatilities by comparing long memory in original series and that in the series after removing extreme values. Third, we examine long memories for different trading horizons (time scales). Our results show that for the time scales varying from one day to one year, long memory cannot be found in returns. For daily time scales, significant long memory can be found in volatilities. However, for monthly and yearly time scales, long memory behavior almost disappeared, in contrast to the seminal “stylized fact” that volatility series were always long-range correlated (Cont, 2001). Our evidence provides new implications for market participants and policy makers. This paper is organized as follows. In Section 2, we provide methodology used in this paper. In Section 3, we show the data and some preliminary analysis. Empirical results and some relevant discussions are shown in Section 4. The last section is concluding remarks.