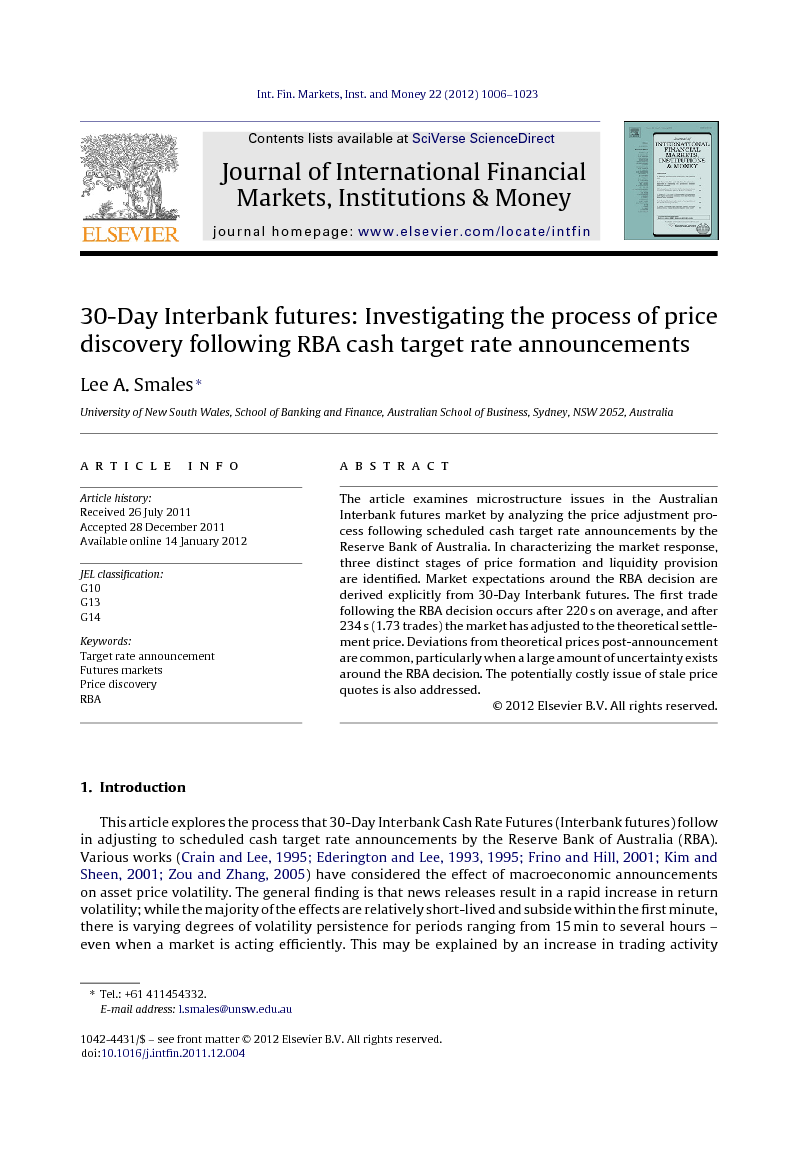 The article examines microstructure issues in the Australian Interbank futures market by analyzing the price adjustment process following scheduled cash target rate announcements by the Reserve Bank of Australia. In characterizing the market response, three distinct stages of price formation and liquidity provision are identified. Market expectations around the RBA decision are derived explicitly from 30-Day Interbank futures. The first trade following the RBA decision occurs after 220 s on average, and after 234 s (1.73 trades) the market has adjusted to the theoretical settlement price. Deviations from theoretical prices post-announcement are common, particularly when a large amount of uncertainty exists around the RBA decision. The potentially costly issue of stale price quotes is also addressed

This article explores the process that 30-Day Interbank Cash Rate Futures (Interbank futures) follow in adjusting to scheduled cash target rate announcements by the Reserve Bank of Australia (RBA). Various works (Crain and Lee, 1995, Ederington and Lee, 1993, Ederington and Lee, 1995, Frino and Hill, 2001, Kim and Sheen, 2001 and Zou and Zhang, 2005) have considered the effect of macroeconomic announcements on asset price volatility. The general finding is that news releases result in a rapid increase in return volatility; while the majority of the effects are relatively short-lived and subside within the first minute, there is varying degrees of volatility persistence for periods ranging from 15 min to several hours – even when a market is acting efficiently. This may be explained by an increase in trading activity as market participants re-balance their portfolios in light of the news, information traders enter the market, and liquidity traders benefit from the elevated interest. Cook and Hahn (1989) were among the first to study the reaction of fixed income markets to monetary policy action; demonstrating that changes in the Fed Funds target rate produced large movements in short-term rates, and smaller but significant movements in intermediate- and long-term rates. A number of studies (Kuttner, 2001 and Fatum and Scholnick, 2008) have found that fixed-income asset returns and volatilities respond only to the surprise component in monetary policy announcements. In the Australian context, Kim and Nguyen (2008) and Smales (2011) find similar results on an inter-day basis. Fleming and Remolona (1999) utilize methods similar to that employed in this article, in analyzing the price formation process in the US Treasury Market, and detect a two-stage adjustment process around macro-economic announcements; they do not investigate monetary policy announcements, and the nature of that paper does not allow for an examination of potential deviations from the theoretical price futures price following the data release. The use of 30-Day Interbank futures allows this study to address several issues that previous studies have not. Firstly, since the Interbank Overnight Cash Rate published by the RBA is not dependent on liquidity factors, as in the US, or reserve requirements, as in Europe, the fixing rarely deviates from target. As such, the front-contract Interbank futures provide an explicit reading of market expectations on RBA Monetary Policy. Secondly, as the outcome of the policy announcement is in effect binary – the RBA decision to change the target rate or not is simultaneously revealed to all market participants at the scheduled time – it is possible to gain an insight into trades that occur away from the theoretical price. Lastly, despite their importance in reflecting market expectations, the front-contract Interbank future is often overlooked in the literature, on the basis that volatility disappears once the RBA target rate announcement is made early in the month; this study provides an opportunity to rectify this slight and examine the shortest part of the yield curve. The article examines microstructure issues in the Australian Interbank futures market by analyzing the price adjustment process following RBA target rate announcements. In characterizing the market response, three distinct stages of price formation and liquidity provision are identified. The first stage, leading up to the RBA announcement, is characterized by low volume and above average spreads as market participants exhibit uncertainty over the rate decision. During this stage, the possibility of asymmetric information makes market participants unwilling to trade. Immediately prior to the announcement bid-ask spreads widen considerably as market-makers adjust their quotes in response to the inventory risks of sharp price changes. A brief second stage is marked by a sharp response to the announcement; a rapid price change together with a substantial increase in trading volume is evidenced as market participants swiftly adjust their portfolios in the light of the RBA rate decision. The high level of trading volume persists for some time, driven by inventory positioning rather than disagreement on the implications of RBA policy since the decision effectively fixes the settlement price of the front contract Interbank future. The final stage sees volume subside to lower levels, while bid-ask spreads revert to normality more quickly than trading volume. Second-month 30-Day Interbank and Federal Funds futures exhibit lower volume, wider bid-ask spreads, and slower trading reactions relative to the front-month 30-Day Interbank futures contract. The first trade following the RBA decision occurs after 220 s, and after 234 s (1.73 trades) the market has adjusted to the theoretical settlement price. Deviations from theoretical prices post-announcement are common, particularly when a large amount of uncertainty exists around the RBA decision. The potentially costly issue of stale price quotes remaining in the exchange over the data release is also examined with 48% of first trades post-announcement occurring on a stale quote. The paper is organized as follows: In Section 1, I describe the RBA cash target rate announcement, the nature of the 30-Day Interbank future market, and the data used in the analysis. I also explain how market expectations surrounding RBA target rate announcements can be derived from Interbank futures. In Section 2, the three-stage adjustment process of the front-contract Interbank future to RBA target rate announcements is detailed, and the implications for price formation and liquidity provision are discussed. This section also discusses the impact of the 2007–2008 Global Financial Crisis (GFC) on the adjustment process. Section 3 investigates the determinants of trade volume and the bid-ask spread. In Section 4, the possibility of market participants erroneously trading at prices that deviate from the theoretical price post-announcement and the relation with stale prices is discussed. Section 5 concludes.

This paper presents an empirical investigation of the ASX 30-Day Interbank futures market. Specifically, the price discovery process following the scheduled release of RBA cash target rate announcements is examined over the 30-min period either side of the release. A three stage process is identified. The first stage occurs in the lead-up to the announcement and is characterized by low volume and above average bid-ask spreads that widen substantially immediately prior to the release. This is consistent with prior literature that market participants are seeking to avoid the problem of adverse selection, and more likely that they wish to avoid the inventory control problem over potentially volatile periods. The second stage occurs in the immediate aftermath of the announcement and is distinguished by rapid price changes and substantial increases in trading volume while spreads remain wide. The trading volume increase is contrary to existing literature, but is consistent with market participants who are aiming to adjust the construction of their portfolio in light of the new information. The final stage sees volumes subside and spreads revert to normal as information uncertainty is resolved. The three stages are more pronounced when the data is disaggregated into periods of high uncertainty and low uncertainty around the RBA decision. The impact of the events of July 2007, namely the onset of the Global Financial Crisis and the consummation of the merger between the Australian Stock Exchange and Sydney Futures Exchange, do not have a significant effect on the identified price discovery process. Second-month 30-Day Interbank and Federal Funds futures exhibit lower volume, wider bid-ask spreads, and slower trading reactions relative to the front-month 30-Day Interbank futures contract. This finding is consistent with market participants requiring a greater amount of time to assimilate information concerning future monetary policy announcements and acting cautiously until such information is processed. The paper briefly examines the determinants of the bid-ask spread, and trading volume, over the 30-min interval around the RBA announcement. OLS regression confirms that both volume and spreads decrease as time from the announcement increases. Market uncertainty has a highly significant effect on volume post announcement. Explicit market expectations surrounding the RBA decision can be derived from 30-Day Interbank futures. The news effect, calculated as the deviation of the RBA decision from market expectations, has a positive relationship with bid-ask spreads, but a negative relationship with trading volume. Finally, the paper finds that deviations from theoretical prices post-announcement are common, particularly when a large amount of uncertainty exists around the RBA decision, highlighting a potential area of trading profit for market participants, both in the Interbank futures market and related OTC markets. The potentially costly issue of stale price quotes remaining in the exchange over the data release is also emphasized, and further research is warranted. Indeed, this may be one area in which the futures exchange may seek to introduce circuit breakers to protect market participants.