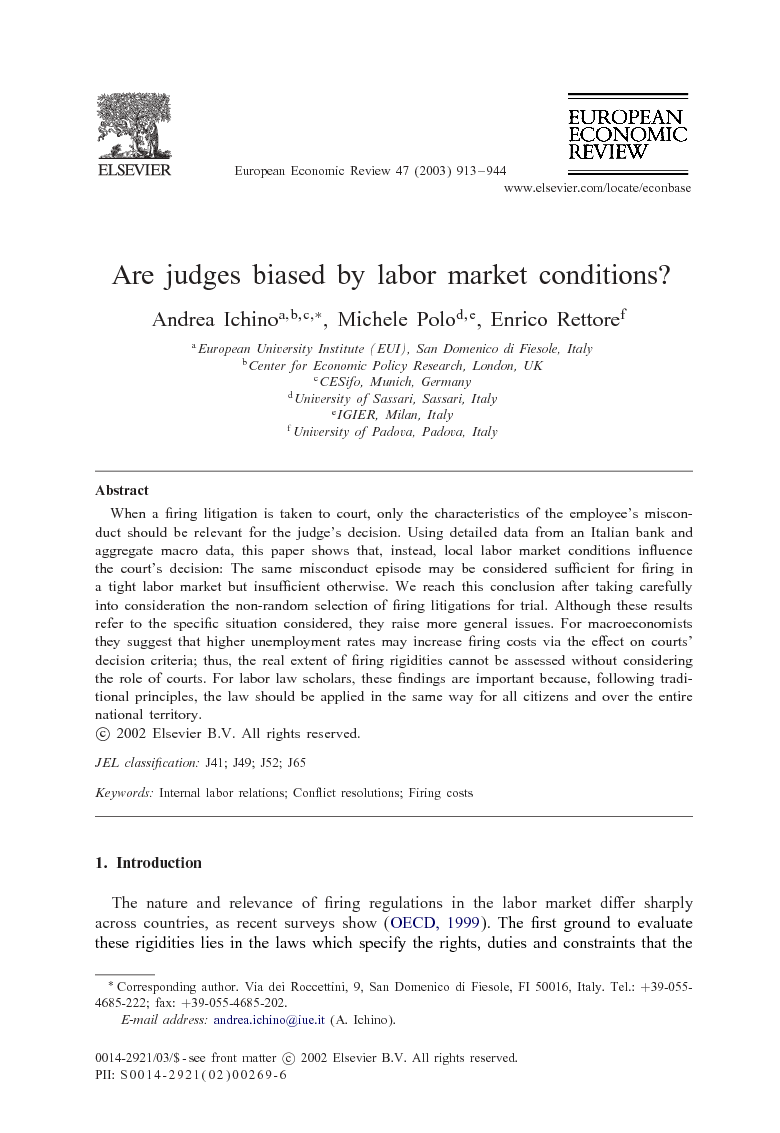 When a firing litigation is taken to court, only the characteristics of the employee's misconduct should be relevant for the judge's decision. Using detailed data from an Italian bank and aggregate macro data, this paper shows that, instead, local labor market conditions influence the court's decision: The same misconduct episode may be considered sufficient for firing in a tight labor market but insufficient otherwise. We reach this conclusion after taking carefully into consideration the non-random selection of firing litigations for trial. Although these results refer to the specific situation considered, they raise more general issues. For macroeconomists they suggest that higher unemployment rates may increase firing costs via the effect on courts’ decision criteria; thus, the real extent of firing rigidities cannot be assessed without considering the role of courts. For labor law scholars, these findings are important because, following traditional principles, the law should be applied in the same way for all citizens and over the entire national territory.

When a firing litigation is taken to court, only the characteristics of the employee's misconduct episode should be relevant for the judge's decision. This paper shows that, instead, local labor market conditions are also likely to influence the court's decision: The same misconduct episode may be considered sufficient for a legitimate firing in a tight labor market but insufficient otherwise. This conclusion has been reached on the basis of the following argument. We observe that where unemployment is higher misconduct episodes brought to trial are no less serious than elsewhere, and if anything more serious. As a consequence, if the legal standard of judges were independent of unemployment, we should also observe the same number of firms’ victories at trial in all regions. We observe, instead, that higher unemployment is associated with more workers’ victories at trial and this suggests that worse labor market conditions induce judges to be more favorable to workers. This effect is not only statistically significant, but also large in size. A 1 percentage point increase of the unemployment rate decreases the probability of a firm victory by 2.5 percentage points. This result suggests, for example, that given the 14 percentage point difference between the regional unemployment rates of Milan and Naples in 1993, the probability of a firm victory would have been approximately 35 percentage points lower in the southern of these two cities for the same misconduct episode. Interestingly, the combined effect of other regional differences, like for example the political orientation of judges, dampens the consequences of the unemployment differential that would be observed if regions had the same characteristics. This finding is important for at least two research fields. From a macroeconomic point of view, in addition to the traditional channel of causation according to which higher firing costs may increase unemployment rates if they reduce hiring more than they prevent firing, the evidence offered by this paper suggests the existence of a reversed channel of causation: higher unemployment rates increase firing costs via the effect on judges’ decisions. More generally, the real extent of firing rigidities, that has been considered so crucial in the debate on European unemployment, cannot be really assessed without taking into consideration the role of courts. The analysis of the relation between labor market conditions and the decision criteria of judges is also important for labor law scholars because following traditional Italian principles, the law should be applied in the same way for all citizens and over the entire national territory: judges should not be influenced by local labor market conditions when deciding on firing litigations. The evidence presented in this paper is mainly based on one, albeit large, Italian firm from which we were able to gather high quality information on misconduct episodes and on the selection of litigations for trial. These firm data, in spite of their high quality and nationwide extension, do not allow us to draw general conclusions. Nevertheless, they suggest that more research on the role of courts in raising labor market rigidities is useful and promising.