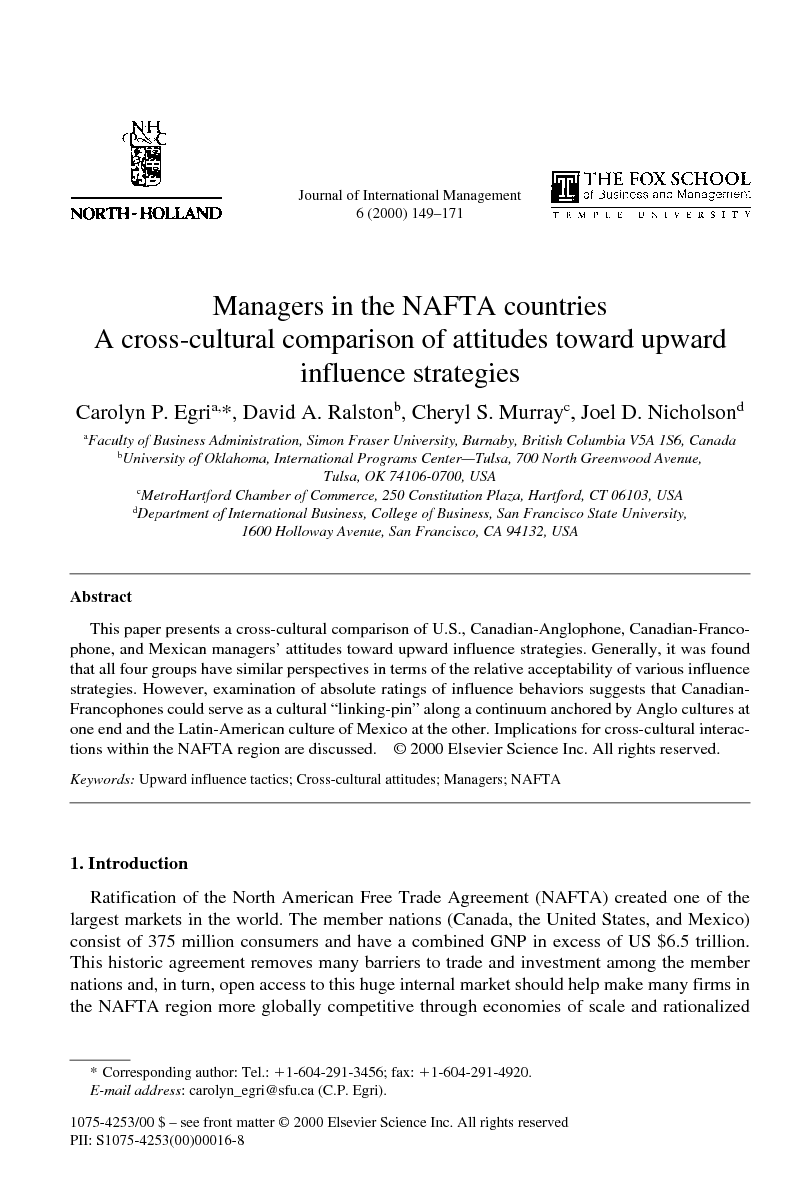 This paper presents a cross-cultural comparison of U.S., Canadian-Anglophone, Canadian-Francophone, and Mexican managers' attitudes toward upward influence strategies. Generally, it was found that all four groups have similar perspectives in terms of the relative acceptability of various influence strategies. However, examination of absolute ratings of influence behaviors suggests that Canadian-Francophones could serve as a cultural “linking-pin” along a continuum anchored by Anglo cultures at one end and the Latin-American culture of Mexico at the other. Implications for cross-cultural interactions within the NAFTA region are discussed.

Ratification of the North American Free Trade Agreement (NAFTA) created one of the largest markets in the world. The member nations (Canada, the United States, and Mexico) consist of 375 million consumers and have a combined GNP in excess of US $6.5 trillion. This historic agreement removes many barriers to trade and investment among the member nations and, in turn, open access to this huge internal market should help make many firms in the NAFTA region more globally competitive through economies of scale and rationalized production (Jain and Ralston, 1996). During the first 5 years of NAFTA (January 1, 1994 through December 31, 1998), total trade in goods and services among the three member nations increased by approximately 76% to more than US $531 billion (Canada Department of Foreign Affairs and International Trade 1999 and SECOFI 1999; U.S. Census Bureau, 1999). During the first 5 years of NAFTA, Canada and the United States continued to be each other's largest trading partner with an 80% increase in trade resulting in an over US $1 billion daily exchange in goods and services. Mexico is now the United States' third largest trading partner (113% increase in total trade from 1993 to 1998) and Canada's third largest source of imports and tenth largest export market (39% increase in total trade from 1993 to 1998). The United States and Canada are Mexico's largest export markets (first and second, respectively). In 1998, 32% of the United States' total world trade (compared to 28% in 1993), 82% of Mexico's total trade (78% in 1993), and 77% of Canada's total trade (74% in 1993) was with other NAFTA countries. NAFTA has also brought significant increases in direct foreign investment within the North American region. United States direct investment in Canada has increased by 63% (to US $98 billion), whereas Canada's investment in the United States has increased by 86% (to US $85 billion). During the same period, Mexico's direct investment in Canada has tripled to US $310 million, whereas Canada's investment in Mexico has increased by 324% (to US $1.5 billion). In total, these trade and investment statistics demonstrate the strong and rapid impact of NAFTA to create a more integrated North American economy. One implication of the strengthening of economic ties within the NAFTA region is the increased importance of developing effective working relationships across national and cultural boundaries. In particular, there is a greater need to accommodate behaviors of the other culture when individuals from Anglo and Latin American cultures work together Kelley et al. 1987, Morris and Pavett 1992, Stephens and Greer 1995 and Gabrielidis et al. 1997. This mutual accommodation encompasses a vast array of managerial behaviors. One significant category of these behaviors that is an important part of a manager's effectiveness is the ability to influence other members of the organization to obtain desired outcomes Mayes and Allen 1977, Allen et al. 1979, Kipnis et al. 1980, Schriesheim and Hinkin 1990, Yukl and Falbe 1990 and Yukl and Tracey 1992. Managers, in the attainment of their work objectives, often need to direct subordinates. Frequently these managers also need to influence their superiors, over whom they possess no formal power (Organ and Bateman, 1990). To exert this type of influence, a manager must develop and utilize a set of informal influence strategies Mowday 1978, Porter et al. 1981, Ansari and Kapoor 1987, Schilit and Locke 1982, Kipnis and Schmidt 1988 and Tandon et al. 1991. Research comparing managers from Asian and Western cultures has shown that whereas they use all the various types of strategies available, national culture appears to play an important role in determining preference for certain influence strategies Schermerhorn and Bond 1991, Ralston et al. 1993b, Ralston et al. 1994 and Ralston et al. 1995c. The successful use of upward influence strategies has been shown to be instrumental in managers attaining desired outcomes (both professional and personal) from their superiors (Deluga and Perry, 1991). Therefore, upward influence relates to the effectiveness and success of both the organization and the individual. Since influence style is a relevant part of the overall superior–subordinate relationship, and since the ability of superiors and subordinates to function together effectively clearly affects organizational performance, managers can benefit from enhanced understanding of cultural differences in influence styles (Ralston et al. 1995b) in order that they may appropriately exercise influence within culturally mixed situations. As such, NAFTA heightens the need for individuals from different cultures of North America to work together more closely for organizational success. Given the importance of individuals from NAFTA countries being able to work together effectively, and given the relevance of influence style to workplace harmony and productivity, this paper will focus on the upward influence styles of managers from the NAFTA countries. In addition, whereas it can be argued that there may be regional cultural differences within the United States and Mexico, we believe that the regional difference most likely to have an impact on influence style behavior (as well as basic values) will be found in Canada. In the United States, the predominant culture is Anglo, and in Mexico, Latin; but in Canada there are two clear-cut geographically based cultural groups. The recent sovereignty association referendum held in Quebec epitomizes the substantial cultural differences between French-speaking Francophones (Latin culture) and English-speaking Anglophones (Anglo culture) Chanlat and Bedard 1991 and Maclean's 1995. Thus, the NAFTA alliance clearly consists of at least four distinct macrolevel cultures. Previous research has compared Americans and Canadians Sirota and Greenwood 1971, Ronen and Kraut 1977, O'Grady and Lane 1992, Connor et al. 1993 and Evans et al. 1992, Anglophones and Francophones Kanungo et al. 1976, Kanungo and Bhatnagar 1978, Jain et al. 1979, Chanlat and Bedard 1991 and Major et al. 1994, and Mexicans and Americans Ramos 1962, Condon 1985, Kras 1989, Morris and Pavett 1992, Stephens and Greer 1995 and Gabrielidis et al. 1997. However, with the exception of the Adler et al. (1987) study on styles of negotiation, no study has simultaneously compared the dynamics of the relationships among these four groups that will likely determine the success (or failure) of NAFTA. Therefore, in this study we compare attitudes toward upward influence styles of four groups of managers: Americans, Canadian-Anglophones, Canadian-Francophones, and Mexicans. Due to the limited cross-cultural influence research available for these groups, the foundation for our hypotheses of the relationships among these groups will be based primarily on the cross-cultural values research.

The findings of this study offer several insights into cross-cultural similarities and differences in attitudes toward upward influence tactics, in general, and for organizations within the NAFTA region, in particular. First, this study found that American, Canadian (Anglophone and Francophone), and Mexican managers share a common perspective on the relative acceptability of various types of influence strategies. Previous research has indicated a similar trend for Asian (China, Hong Kong, and India) and European (Germany and The Netherlands) managers Ralston et al. 1994, Ralston et al. 1998 and Fu and Yukl 1998, thus providing preliminary evidence that an acceptability hierarchy of influence behaviors may be universal. However, as revealed by the intergroup differences in this study as well as previous ones, the degree of relative acceptability that a culture attaches to these general categories of influence style can vary significantly. Specifically, this study found significant differences between Canadian-Anglophone, American, Canadian-Francophone, and Mexican managers in terms of the absolute acceptability of different types of upward influence behaviors. This study's findings provide moderate support for the crossvergent perspective (Ralston et al., 1995b), in that the Canadian-Francophones appear to be a cultural “linking pin” in influence styles between the Anglo and Mexican cultures in North America. As such, they can be regarded as a Janus that faces and understands the other more divergent cultures and can play an important role in facilitating effective work relationships in joint ventures, business negotiations, and other organizational interactions that involve members of more divergent cultural groups. For example, a national Canadian firm may find it strategically advantageous to utilize Canadian-Francophones in negotiating business contracts with Mexican firms. Interestingly, these findings also suggest that U.S. culture may be a “linking pin” between Canadian-Anglophone and -Francophone managers in this regard. As found in a number of previous studies Adler et al. 1987, Adler and Graham 1989, Evans et al. 1992 and O'Grady and Lane 1992, there are significant differences in work-related values, attitudes, and behaviors between Canadian-Anglophone and American managers. One implication for managerial practice is that American and Canadian-Anglophone managers should not assume that they hold the same attitudes even though they share a common language. Additionally, the attitudinal differences between the two Canadian groups demonstrates the importance of understanding regional cultural differences, as also found in previous studies Kanungo et al. 1976, McCarrey et al. 1977, Kanungo and Bhatnagar 1978, Jain et al. 1979, Adler et al. 1987 and McCarrey et al. 1989. The findings of these more recent studies sharply contrast with the earlier work of Hofstede (1980), which suggests that all of Canada is similar to the United States, when in fact both Canadian subcultures are different from the United States, although in different directions. One possible explanation for the attitudinal differences between the Canadian-Anglophone and -Francophone managers could be that the political issues separating the Anglophones and Francophones in Canada might be causing the Francophone minority to move toward solidarity of its culture with an us-versus-them mentality, rather than convergence with the ideas and values of the Canadian-Anglophone culture. Therefore, this study reinforces the importance of understanding the unique circumstances of the groups under study as well as the phenomenon being analyzed. The implications for companies operating within Canada are that there appears to be two distinct managerial subcultures that have substantively different perspectives on interpersonal interactions, and that not understanding these differences may lead to less-than-productive relationships.