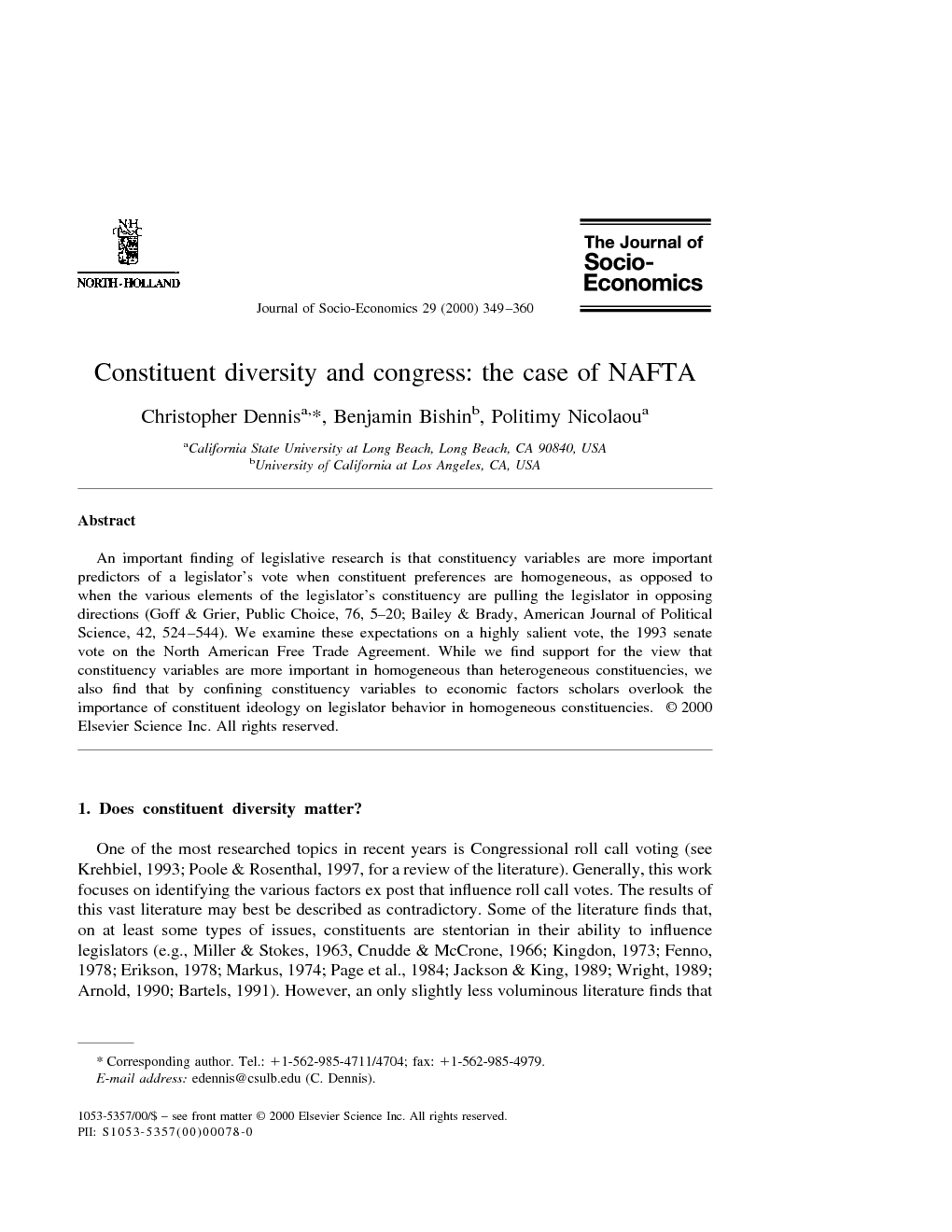 One of the most researched topics in recent years is Congressional roll call voting (see Krehbiel 1993 and Poole and Rosenthal 1997 for a review of the literature). Generally, this work focuses on identifying the various factors ex post that influence roll call votes. The results of this vast literature may best be described as contradictory. Some of the literature finds that, on at least some types of issues, constituents are stentorian in their ability to influence legislators (e.g., Miller and Stokes 1963, Cnudde and McCrone 1966, Kingdon 1973, Fenno 1978, Erikson 1978, Markus 1974, Page et al 1984, Jackson and King 1989, Wright 1989, Arnold 1990 and Bartels 1991). However, an only slightly less voluminous literature finds that legislators’ personal preferences as reflected through their ideology are the most important influence on roll call decisions (e.g., Achen 1978, Bernstein 1989 and Kau and Rubin 1979, 1993; Poole and Rosenthal 1997 and Peltzman 1984, 1985; but for a different view of ideology see Richardson & Munger, 1990; Dougan & Munger, 1989). Indeed these results lead Arnold (1990) to hold that “Unfortunately, the effects of these electoral calculations will never show up in a study of representation that searches for correlations between measures of constituency opinion and legislators’ actual decisions.” We believe that these contradictory results stem from the fact that researchers have not fully examined the various ways in which legislators interpret the views of their constituents (for a similar view see Achen, 1978). Due to difficulty obtaining data, most studies use whatever proxy for constituency effect is available. However, since legislators may use different constituency cues for different constituencies on various issues, studies using measures based only on the best available data may understate the effect of constituency. In order to more fully explore the impact of constituency preferences on legislator behavior, we need a vote that has attained sufficient salience so that constituency opinion is reasonably well-formed and for which there are good measures of the various nonconstituency opinion factors that previous research suggests may also influence the legislator (e.g., the economic self-interest of the constituency). One recent senate vote that meets these criteria is the vote on the North American Free Trade Agreement (NAFTA).