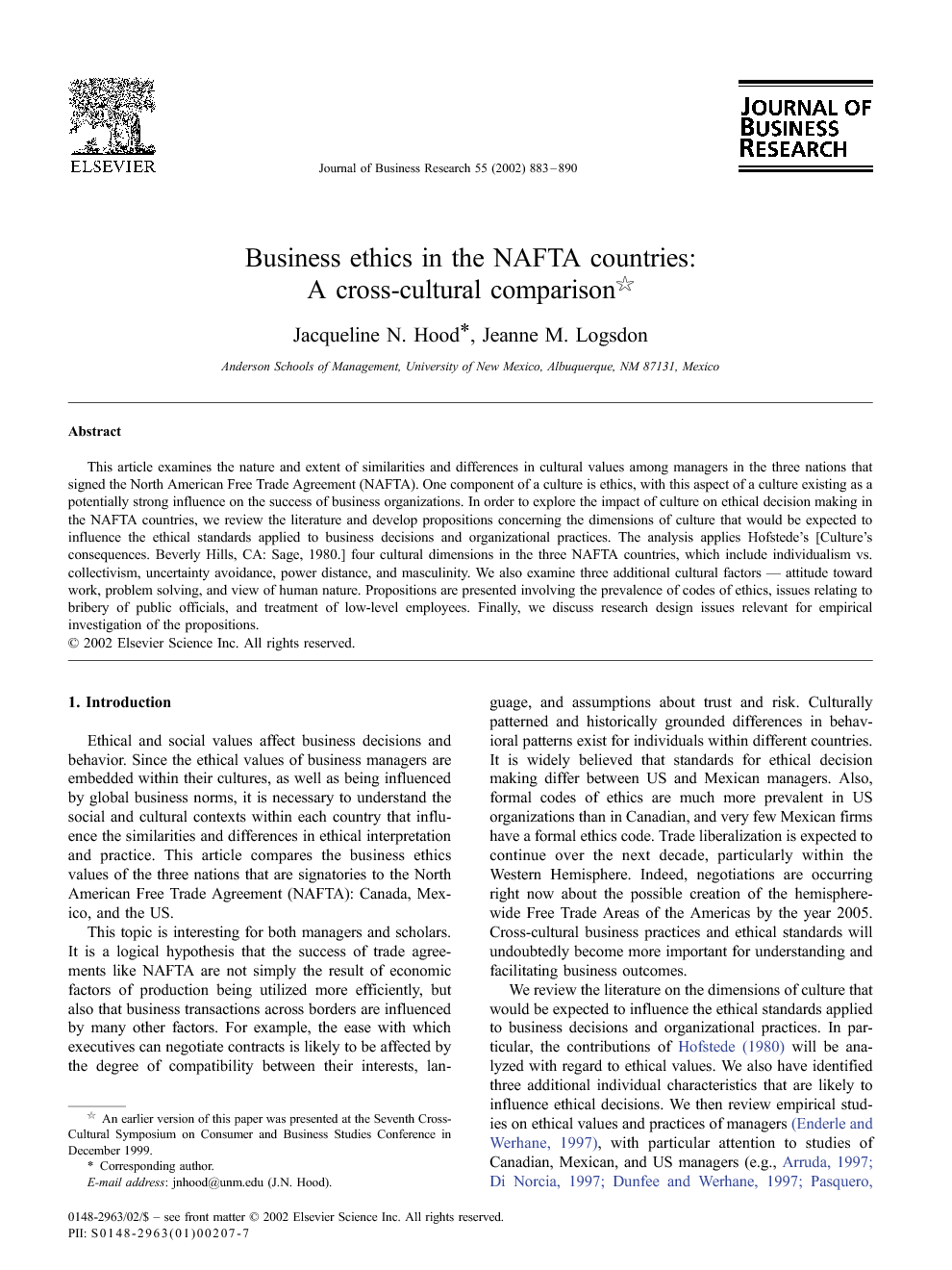 This article examines the nature and extent of similarities and differences in cultural values among managers in the three nations that signed the North American Free Trade Agreement (NAFTA). One component of a culture is ethics, with this aspect of a culture existing as a potentially strong influence on the success of business organizations. In order to explore the impact of culture on ethical decision making in the NAFTA countries, we review the literature and develop propositions concerning the dimensions of culture that would be expected to influence the ethical standards applied to business decisions and organizational practices. The analysis applies Hofstede's [Culture's consequences. Beverly Hills, CA: Sage, 1980.] four cultural dimensions in the three NAFTA countries, which include individualism vs. collectivism, uncertainty avoidance, power distance, and masculinity. We also examine three additional cultural factors — attitude toward work, problem solving, and view of human nature. Propositions are presented involving the prevalence of codes of ethics, issues relating to bribery of public officials, and treatment of low-level employees. Finally, we discuss research design issues relevant for empirical investigation of the propositions.

Ethical and social values affect business decisions and behavior. Since the ethical values of business managers are embedded within their cultures, as well as being influenced by global business norms, it is necessary to understand the social and cultural contexts within each country that influence the similarities and differences in ethical interpretation and practice. This article compares the business ethics values of the three nations that are signatories to the North American Free Trade Agreement (NAFTA): Canada, Mexico, and the US. This topic is interesting for both managers and scholars. It is a logical hypothesis that the success of trade agreements like NAFTA are not simply the result of economic factors of production being utilized more efficiently, but also that business transactions across borders are influenced by many other factors. For example, the ease with which executives can negotiate contracts is likely to be affected by the degree of compatibility between their interests, language, and assumptions about trust and risk. Culturally patterned and historically grounded differences in behavioral patterns exist for individuals within different countries. It is widely believed that standards for ethical decision making differ between US and Mexican managers. Also, formal codes of ethics are much more prevalent in US organizations than in Canadian, and very few Mexican firms have a formal ethics code. Trade liberalization is expected to continue over the next decade, particularly within the Western Hemisphere. Indeed, negotiations are occurring right now about the possible creation of the hemisphere-wide Free Trade Areas of the Americas by the year 2005. Cross-cultural business practices and ethical standards will undoubtedly become more important for understanding and facilitating business outcomes. We review the literature on the dimensions of culture that would be expected to influence the ethical standards applied to business decisions and organizational practices. In particular, the contributions of Hofstede (1980) will be analyzed with regard to ethical values. We also have identified three additional individual characteristics that are likely to influence ethical decisions. We then review empirical studies on ethical values and practices of managers (Enderle and Werhane, 1997), with particular attention to studies of Canadian, Mexican, and US managers (e.g., Arruda, 1997, Di Norcia, 1997, Dunfee and Werhane, 1997 and Pasquero, 1997). Propositions that will be useful in analyzing cross-cultural management challenges and global competition and guiding future research are developed with respect to codes of ethics, bribery of public officials, and treatment of low-level employees. The article concludes with suggestions for empirical research designs to explore these relationships.

This article has outlined propositions for three ethical practices that may be related to cultural characteristics of the NAFTA countries. The success of the NAFTA initiative may depend upon whether collaborative practices can be developed within organizations doing business in the three countries. Key to successful integration of practices are the ethical policies and values of the managers and employees within business organizations. Managers need to become more knowledgeable about and comfortable with cultures outside their home countries in order to be successful in an increasingly competitive global environment. Understanding how business is conducted in other countries is critical, and this involves not only technical operating norms and expectations, but also a clear understanding of each culture's ethical values for business transactions.