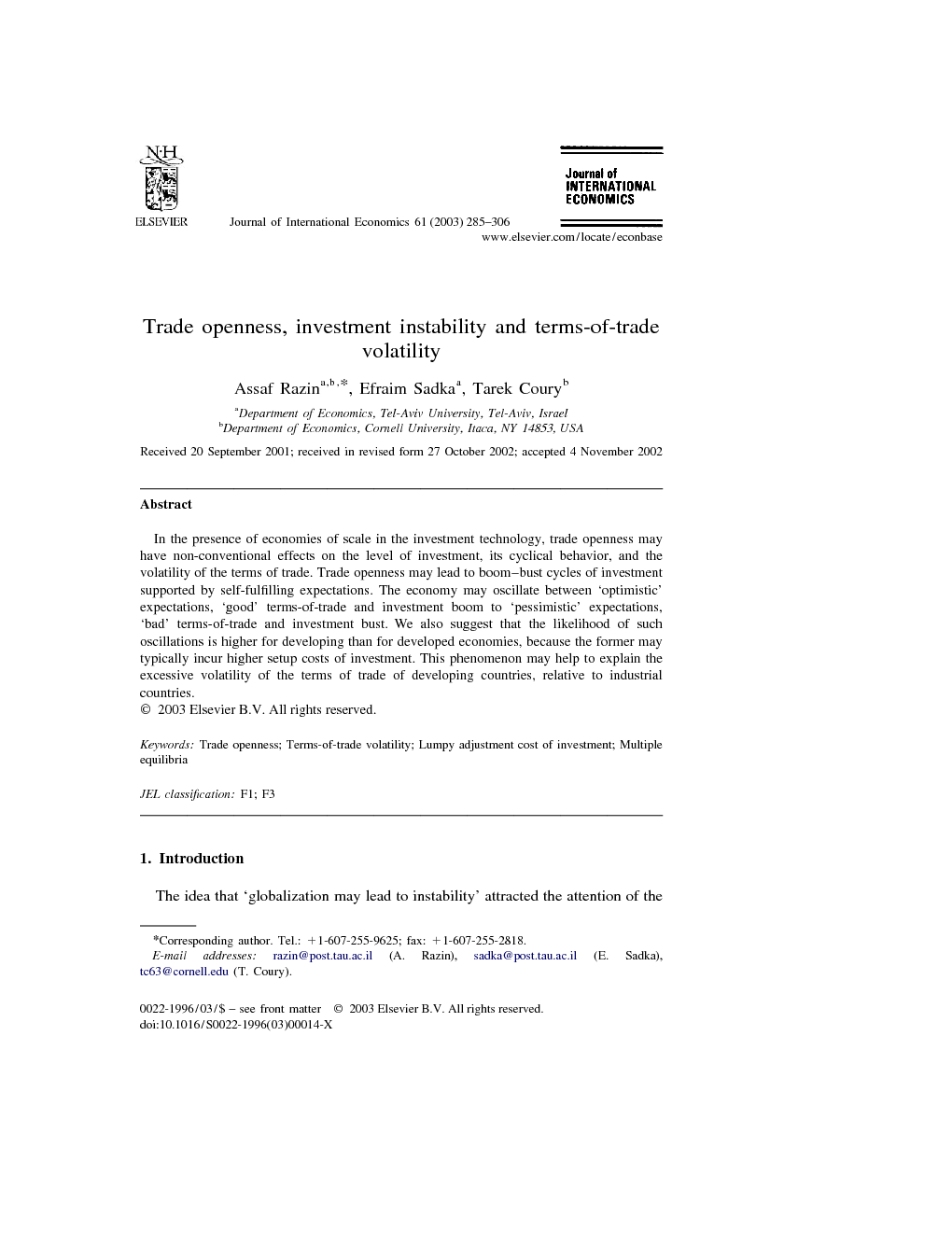 In the presence of economies of scale in the investment technology, trade openness may have non-conventional effects on the level of investment, its cyclical behavior, and the volatility of the terms of trade. Trade openness may lead to boom–bust cycles of investment supported by self-fulfilling expectations. The economy may oscillate between ‘optimistic’ expectations, ‘good’ terms-of-trade and investment boom to ‘pessimistic’ expectations, ‘bad’ terms-of-trade and investment bust. We also suggest that the likelihood of such oscillations is higher for developing than for developed economies, because the former may typically incur higher setup costs of investment. This phenomenon may help to explain the excessive volatility of the terms of trade of developing countries, relative to industrial countries.

The idea that ‘globalization may lead to instability’ attracted the attention of the profession in recent years. A number of authors have demonstrated that increased capital mobility can be destabilizing in the sense that it increases the possibility of multiple self-fulfilling expectations equilibria; see, for example, Lahiri (1999), Meng and Velasco (1999) and Aghion et al. (1999). In this body of the growth literature, some external economies (as may be associated, for instance, with human capital accumulation), may lead to multiplicity of equilibria. Capital account liberalization, which facilitates intertemporal consumption smoothing, increases the range of parameter values for which the multiple equilibria occur. In the present paper we focus on the destabilizing effect of trade openness, which usually precedes capital account liberalization in the globalization process during economic development. We employ a ‘lumpy’ adjustment cost for new investment, in the form of a fixed setup cost of investment. This specification, which has been recently supported empirically by Caballero and Engel, 1999 and Caballero and Engel, 2000, creates economies of scale in investment. As a result, it tends to lump investment over time, in contrast to the more standard convex cost-of-adjustment specification, that leads to the spreading of investment spending over time. Trade openness may cause either appreciation or depreciation of the setup cost of investment, through changes in the terms of trade, and thereby may generate instability in the form of boom–bust investment cycles. It is demonstrated that this multiplicity of self-validating expectations equilibria (as it is triggered by terms-of-trade effects) is an intrinsic feature of trade openness. The phenomenon of multiple equilibria may offer also some explanation for the high volatility of the terms of trade in developing countries. Indeed, studies over a long period of 30 years show a markedly higher volatility of the terms of trade in developing countries, as compared to the developed (G-7) countries. For instance, Razin (1995) reports that the percentage standard deviation of the terms in trade in a developing country such as Mexico is 7-fold higher than the corresponding deviation in a developed country such as Canada; see Table 1. Similar differences are reported also by Mendoza (1995). A traditional explanation for these differences is that the terms of trade in many developing countries are affected mostly by the prices of their export goods which consist to a significant extent of commodities (coffee, cocoa, etc.) traded in asset-like world markets where prices are typically volatile. This paper points out to a supplemental channel for such volatility. In developing countries, the infrastructure of communication, transportation, etc. is typically inadequate. Also, there is a scarcity of skilled, trained labor. Therefore, firms in these countries may have to incur a relatively high setup cost of training people, setting their own infrastructure, etc. when they invest. Such high setup costs are conducive to multiplicity of equilibria, which are reflected in highly volatile terms of trade. Table 1. Terms-of-trade volatility Country Percentage standard deviation Developed countries, G-7 (1955–1990) United States 7.11 United Kingdom 4.56 France 5.38 Germany 7.69 Italy 7.83 Canada 3.64 Japan 14.77 Developing countries (1961–1990) Argentina 26.84 Brazil 27.33 Chile 18.86 Mexico 30.84 Peru 26.57 Venezuela 28.04 Israel 11.77 Egypt 17.35 Taiwan 13.82 India 18.29 Indonesia 12.35 Korea 16.19 Philippines 13.93 Thailand 13.16 Algeria 23.83 Cameroon 17.25 Zaire 18.97 Kenya 16.05 Source: Razin (1995). Table options Economies of scale either in the production or investment technologies are also a key contributor to the gains from trade and economic integration. For example, based on estimates taken from a partial equilibrium analysis, the Cecchini et al. (1988) Report assesses that the gains from taking advantage of economies of scale will constitute about 30 percent of the total gains from the European market integration in 1992. Similarly, in a static general-equilibrium setting, Smith and Venables (1988) provide some industry simulations of the effects of the European integration, and find again a substantial role for economies of scale. This paper, in essence, sheds a different light on the gains-from-trade implications of economies of scale. There could be indeed substantial gains from trade in an investment–boom equilibrium, but the gains could be meager or even negative in an investment–bust equilibrium. The organization of the paper is as follows. Section 2 develops a model of a setup investment cost. Section 3 describes the consumption side of the model economy. The free-trade equilibrium is analyzed in Section 4. The destabilization effect of trade-openness is demonstrated in Section 5, for an exogenously given export demand function, and in Section 6 for a two-country model with endogenous export and import demand functions. Section 7 concludes.

In the presence of economies of scale in the investment technology, trade openness may have non-conventional effects on the level of investment and its cyclical behavior. Trade openness may lead to a discrete ‘jump’ in the level of investment, as it may trigger a discrete price change and specialization. In the presence of economies of scale, such a shift creates a sizeable boost in aggregate investment. But trade openness may also lead to boom–bust cycles of investment (namely, multiple equilibria) supported by self-fulfilling expectations.12 In this sense, globalization destabilizes the economy. The economy may oscillate between ‘optimistic’ expectations, ‘good’ terms of trade and investment boom to ‘pessimistic’ expectations, ‘bad’ terms of trade and investment bust.13 We also suggest that the likelihood of such oscillations is higher for developing than for developed economies, because the former may typically incur higher setup costs of investment. This phenomenon may help to explain the excessive volatility of the terms of trade of developing countries. Our analysis also sheds new light on the implications of economies of scale for the gains from trade argument. There could be substantial gains in the investment–boom equilibrium. However, gains could be small and even negative in the investment–bust equilibrium.