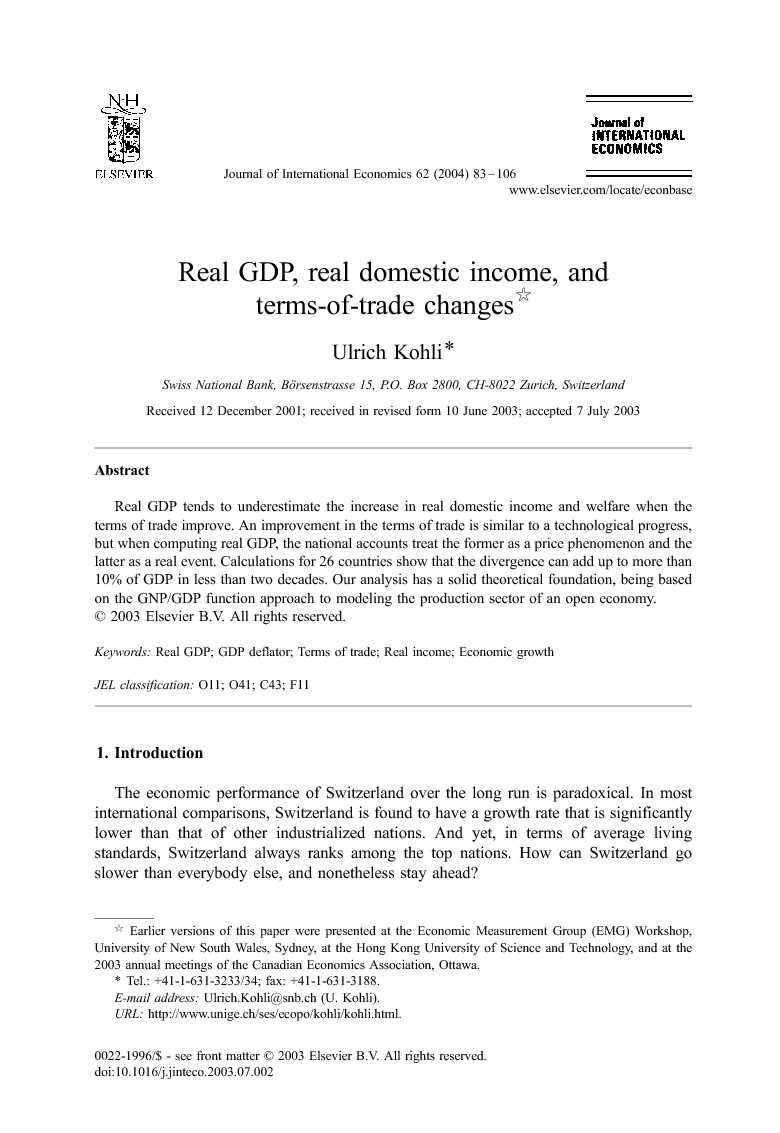 Real GDP tends to underestimate the increase in real domestic income and welfare when the terms of trade improve. An improvement in the terms of trade is similar to a technological progress, but when computing real GDP, the national accounts treat the former as a price phenomenon and the latter as a real event. Calculations for 26 countries show that the divergence can add up to more than 10% of GDP in less than two decades. Our analysis has a solid theoretical foundation, being based on the GNP/GDP function approach to modeling the production sector of an open economy.

The economic performance of Switzerland over the long run is paradoxical. In most international comparisons, Switzerland is found to have a growth rate that is significantly lower than that of other industrialized nations. And yet, in terms of average living standards, Switzerland always ranks among the top nations. How can Switzerland go slower than everybody else, and nonetheless stay ahead? For the period 1980–1996, for instance, Switzerland, with an average real GDP growth rate of 1.3%, occupies the last position in a sample of 26 OECD countries. One could of course argue that this is a sign of convergence. If Switzerland has a relatively high living standard initially, it is perfectly possible that it grows less rapidly than its neighbors, and nevertheless that it maintain its lead position for a while yet. Sooner or later, though, it will be caught up. It turns out, however, that the Swiss growth paradox is not new. According to Dewald's (2002) data that span the period 1880–1995, Switzerland occupies the second-last position in a sample of 12 countries in terms of per-capita real growth. Knowing that 19th century Switzerland was a poor country in European comparison, how can one explain that it is today one of the countries where real income is highest? The answer to this puzzle has to do, at least partially, with the improvements in the terms of trade that Switzerland has enjoyed over time. From 1980 to 1996, for instance, Switzerland's terms of trade have improved by a stunning 34%. In many ways, an improvement in the terms of trade is similar to a technological progress. It means that, for a given trade-balance position, the country can either import more for what it exports, or export less for what it imports. Put simply, it makes it possible to get more for less. An improvement in the terms of trade unambiguously increases real income and welfare. Yet, unlike a technological progress, the beneficial effect of an improvement in the terms of trade is not captured by real GDP, which focuses on production per se. In fact, if real GDP is measured by a Laspeyres quantity index, as it is still the case in most countries, an improvement in the terms of trade will actually lead to a fall in real GDP. Real GDP is often used as a proxy of a country's real income, even though official statisticians warn against such a practice.1 Thus, Prescott (2002), who singles out Switzerland for its poor economic performance over the past three decades, focuses exclusively on real GDP. We argue in this paper that real GDP can be a very misleading indicator of a country's welfare in the face of changing terms of trade. It is therefore important to distinguish between real GDP, on one hand, and real domestic income, on the other. Real GDP focuses on production possibilities, whereas real income stresses consumption (or more generally absorption) possibilities and, ultimately, welfare.2 We show that real GDP systematically underestimates growth in real income when the terms of trade improve. The distinction between real GDP and real income implies differences between the corresponding price indexes. The implicit GDP price deflator, which is obtained by dividing nominal GDP by real GDP, will point at higher inflation than the income price deflator when the terms of trade improve. In fact, it turns out that a drop in the price of imports, holding all other prices constant, leads to an increase in the GDP price deflator.

The GDP deflator is often described as the broadest measure of a country's price level. When the national-accounts data are published, changes in the GDP deflator are closely scrutinized. Increases are generally viewed with concern since they are interpreted as revealing inflationary pressures. This is clearly inappropriate if the increase in the GDP deflator results from a decrease in import prices. A fall in import prices, other things equal, is fundamentally a positive outcome. It has no inflationary effects, quite the contrary. If an increase in the GDP deflator is incorrectly interpreted as signaling inflationary pressures, it could lead to the wrong policy reaction. Yet, it is precisely the GDP deflator that Taylor (1993) used as a measure of inflation when proposing his famous rule for monetary policy. 28 For many countries, including the United States, the difference between real GDP and the implicit Törnqvist index of real domestic income appears to be rather small on average. Nevertheless, a difference of one or two percentage points of real growth is not trivial: for the United States, using 1980 as a starting point, the difference by 1996 amounted to about 1.3% of GDP, i.e. over 100 billion dollars at 1996 prices. Such figures are of the same order of magnitude as the gap between real GDP and Command-Basis GDP. This discrepancy was deemed large enough by the U.S. Bureau of Economic Analysis to warrant publication of Command-Basis GNP series. Moreover, long-run averages can mask significant annual deviations. Thus, the annual growth discrepancy has exceeded one percentage point at least once for most countries in our sample. Since annual changes in economic performance are closely watched and may trigger policy responses, it is important that they be measured as accurately as possible. This is particularly easy to do here since the data necessary to compute the implicit Törnqvist real-income index are exactly the same as the ones needed to construct real GDP. Real GDP was found to underestimate the growth in real domestic income in a majority of the countries in our sample. This is due to the improvements in the terms of trade that these countries have experienced over the past two decades. Since our sample was made up mostly by industrialized nations, it suggests that many less-developed countries must have suffered a worsening in their own terms of trade. Consequently, real GDP will tend to overstate the increase in real income in those countries. Any evidence on income convergence between poor and rich countries, which typically rests on real GDP comparisons, may thus have to be reassessed. One could object that even if it is true that real income increases as a result of an improvement in the terms of trade, this is of limited interest since it might not create a single job. The reason why many economists are interested in GDP figures is because an increase in real GDP is usually associated with a rise in employment. Even if it were true that an improvement in the terms of trade does not create any jobs,29 this criticism would be beside the point for several reasons. For a start, as we showed above, an improvement in the terms of trade may lead to a reduction in real GDP, a reduction that is meaningless. Second, a technological change, which is integrated in the calculation of real GDP, leads to an increase in real GDP without necessarily creating any jobs either. Technological progress, just like an improvement in the terms of trade, may be pro- or anti-labor biased. Both phenomena are similar, and there is no reason therefore to treat them differently. In truth, if one was really interested in the demand for labor, it would be much more sensible to derive it from a GDP function such as Eq. (12), instead of relying on a very crude indicator such as real GDP.30 Finally, one ought to remember that it is real income—and ultimately consumption—that generates utility, rather than work effort. One could also counter that real GDP attempts to measure a country's production effort—production requires hard work—and that there is little merit in experiencing an “effortless” improvement in the terms of trade. Such an objection would reveal an exceedingly narrow view of the nature of production activities. While an improvement in the terms of trade may indeed be a purely exogenous event, foreign trade is an activity that requires much effort. Importers and exporters must constantly scout world markets in search of better opportunities, domestic producers must position themselves to exploit existing comparative advantages, and always be on the lookout for new ones. These efforts require resources, and they are an intimate part of the production process. Similar considerations apply to technological change. Technological progress too may be the outcome of chance, or it may even be imported from abroad. It is certainly not true that every invention or innovation is the outcome of a systematic and tiresome research effort. There is therefore no reason to discriminate between these two types of efforts on a a priori basis. This is all the more true that, as we argued earlier, it may be impossible to distinguish one from the other.