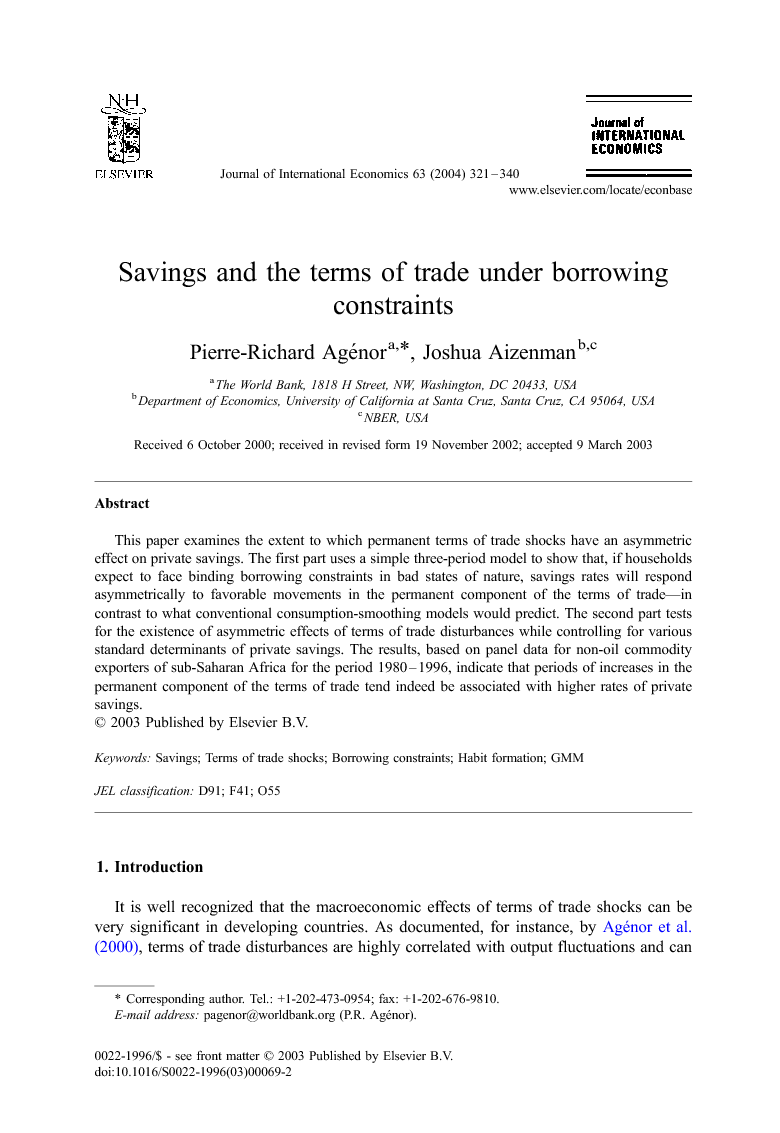 This paper examines the extent to which permanent terms of trade shocks have an asymmetric effect on private savings. The first part uses a simple three-period model to show that, if households expect to face binding borrowing constraints in bad states of nature, savings rates will respond asymmetrically to favorable movements in the permanent component of the terms of trade—in contrast to what conventional consumption-smoothing models would predict. The second part tests for the existence of asymmetric effects of terms of trade disturbances while controlling for various standard determinants of private savings. The results, based on panel data for non-oil commodity exporters of sub-Saharan Africa for the period 1980–1996, indicate that periods of increases in the permanent component of the terms of trade tend indeed be associated with higher rates of private savings.

It is well recognized that the macroeconomic effects of terms of trade shocks can be very significant in developing countries. As documented, for instance, by Agénor et al. (2000), terms of trade disturbances are highly correlated with output fluctuations and can be a major source of aggregate economic volatility. Such disturbances tend also to have a large impact on savings (both private and public), in part because of their large income effects. Moreover, there is some informal evidence suggesting that terms of trade shocks can entail an asymmetric response in savings, as a result, for instance, of the existence of borrowing constraints on world financial markets. Specifically, the experience of the past few years suggests that households (and governments) from poor countries may be able to deposit their windfall savings on the international capital market in good times, but that they may be unable to borrow as much as they would like in bad times because of collateral problems or a (perceived) high risk of default (see World Bank, 1999, Chapter 2). As emphasized by Deaton (1992), among others, this asymmetry can create an incentive for precautionary saving, because in the case of a negative shock consumption can be smoothed only by running down previously accumulated assets. There is relatively scant empirical evidence on whether terms of trade shocks can generate an asymmetric response in private savings. This paper attempts to fill this void by using cross-section econometric regressions for a group of countries for which movements in the terms of trade have traditionally represented a key source of macroeconomic shocks, non-oil exporters of sub-Saharan Africa. It is organized as follows. Section 2 discusses analytical issues. It reviews briefly the conventional, consumption-smoothing approach to assessing the effects of terms of trade shocks on savings, and considers the role of borrowing constraints in explaining an asymmetric consumption and savings response by private agents to this type of shocks. It elaborates, in particular, on the role of expected borrowing constraints in bad states of nature. Section 3 provides some informal evidence on the asymmetric response of private savings during recent episodes of upswings and downswings in prices of commodities exported by non-oil sub-Saharan African countries. Section 4 specifies a regression model in order to assess the existence of an asymmetric effect of terms of trade movements on private savings and describes the estimation technique. Section 5 presents the empirical results, based on panel data covering the period 1980–1996 for non-oil exporters of sub-Saharan Africa. The last section summarizes the results and provides some directions for further research.

The purpose of this paper has been to examine whether terms of trade shocks have an asymmetric effect on private savings. The first part used a simple three-period framework to argue that, in the presence of binding borrowing constraints in bad states of nature, saving rates can be sensitive to favorable movements in the permanent component of the terms of trade—in contrast to what the conventional consumption-smoothing framework would predict. Households in developing countries (particularly those that have limited creditworthiness to begin with) may indeed be unable to smooth consumption when faced with adverse shocks to world commodity prices and the terms of trade, because they are subject to credit constraints that become tighter more binding in such situations. As a result, to maintain a smooth consumption path, domestic agents may be forced to dissave by a larger amount than they would otherwise. This argument also suggests that, to the extent that domestic agents internalize the possibility of facing tighter credit constraints in bad states of nature, they may also consume less of their permanent income, and instead save a fraction of it, in good times. The second part provided some informal evidence, based on data for non-oil commodity exporters of sub-Saharan Africa, on the behavior of private savings during episodes of terms of trade improvements and deteriorations, as captured by movements in international commodity prices. We found indeed some support for the view that the private savings ratio may have responded asymmetrically in many cases, but that broad generalizations across countries were not warranted. We then turned to a more formal empirical test of asymmetry. The third part described the econometric methodology and the specification of the regression model, which controls for various standard determinants of private savings. The fourth part presented and discussed our empirical results, based on an unbalanced panel dataset for non-oil commodity exporters of sub-Saharan Africa covering the period 1980–1996. Overall, they suggest that transitory movements in the terms of trade have a positive effect (albeit less than one to one) on the propensity to save, as suggested by the HLM effect. We also found that the dependency ratio and the degree of financial development have positive effects on private savings, whereas the level of income per capita and inflation have no discernible effect. Most importantly for our purpose, we found that favorable movements in the permanent component of the terms of trade (defined in two different ways) tend indeed to lead to higher rates of private savings, as predicted by our analytical framework. Our interpretation focused on the adjustment of saving to a permanent shock, in circumstances where borrowing constraints are anticipated to bind in the future and habit formation are present. It should be noted, however, that our empirical results could be consistent with another interpretation. For instance, if the permanent shock is associated with an anticipated increase in future volatility, it would raise the demand for assets needed to be used as an effective buffer stock in the future, thereby increasing private savings today. Nevertheless, it can be verified that the logic of our analysis continues to apply in this case—the increase in the demand for the buffer stock is magnified by the anticipation of future borrowing credit constraints and by greater loss aversion. The analysis developed in this paper can be extended to study the asymmetric effects of terms of trade shocks on savings in oil-exporting countries, both public and private10. This is important because of the policy concerns that the high degree of commodity price volatility has generated in recent years. The 1998 slump in commodity prices, for instance, generated large terms of trade effects. Although the real income effect on primary commodity exporters was moderate (of the order of −0.5% of GDP), and net importers of oil and primary commodities actually registered a gain overall, oil exporters registered a negative real income effect of the order of −6.3% of GDP (World Bank, 2000, Chapter 4). Because oil exports account for almost all of government revenues in oil-exporting countries, the public sector bore the brunt of adjustment. The ability of each country to smooth public consumption in response to the revenue shortfall was, however, limited by their ability to draw down their official reserves and to borrow, both domestically and abroad. In many cases, constraints on domestic finance and lack of access to international capital markets actually prevented governments from successfully smoothing the impact of the oil price cycle, and economic performance deteriorated11. The same study by the World Bank also noted that although adjustment to the oil price swings in the past few years differed significantly across oil exporters, most countries increased their aggregate saving rates during the rise in oil prices in 1996–1997 (compared with 1993–1995) and reduced them during the 1998 slump. This pattern is consistent with consumption smoothing behavior (possibly by both private households and the public sector) in the presence of transitory shocks that are perceived as such. In addition, the savings response was found to be asymmetric: on average, saving rates rose by less than half of the real income gain during the 1996–1997 boom, but fell by the full amount of the decline in real incomes during the 1998 collapse in prices. Extending the analytical framework presented in this paper to account for an asymmetric response of public savings would provide a fruitful exercise.