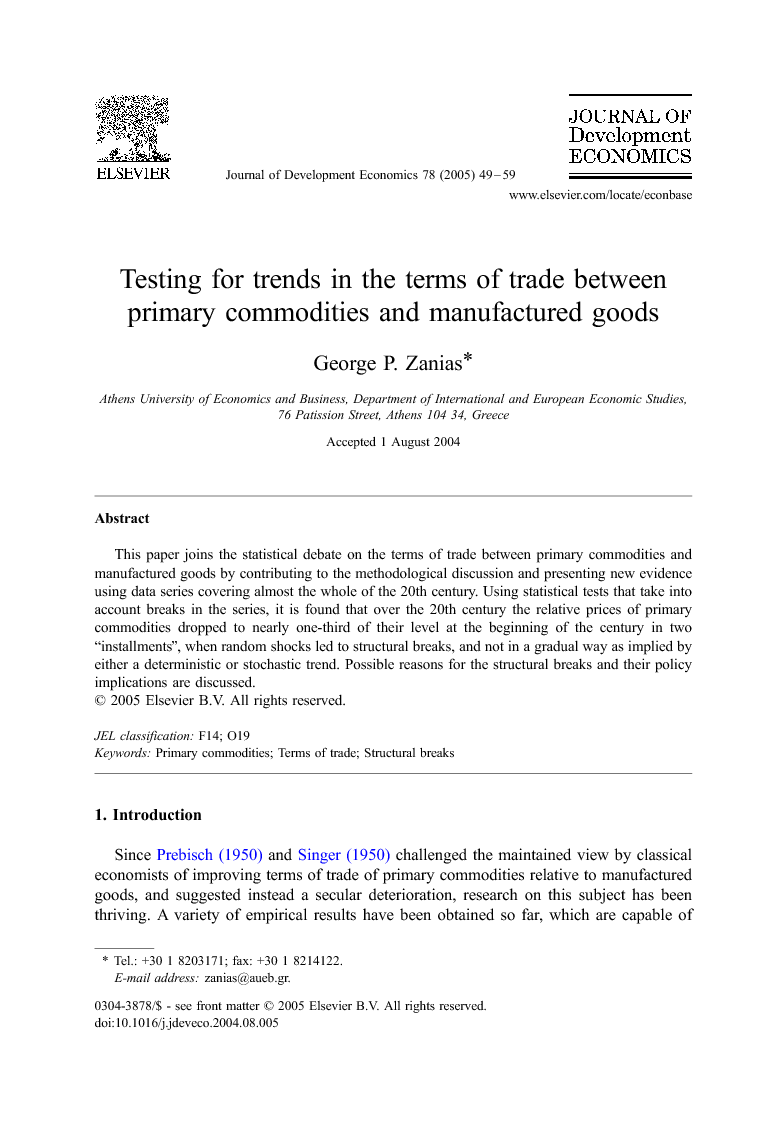 This paper joins the statistical debate on the terms of trade between primary commodities and manufactured goods by contributing to the methodological discussion and presenting new evidence using data series covering almost the whole of the 20th century. Using statistical tests that take into account breaks in the series, it is found that over the 20th century the relative prices of primary commodities dropped to nearly one-third of their level at the beginning of the century in two “installments”, when random shocks led to structural breaks, and not in a gradual way as implied by either a deterministic or stochastic trend. Possible reasons for the structural breaks and their policy implications are discussed.

Since Prebisch (1950) and Singer (1950) challenged the maintained view by classical economists of improving terms of trade of primary commodities relative to manufactured goods, and suggested instead a secular deterioration, research on this subject has been thriving. A variety of empirical results have been obtained so far, which are capable of supporting conflicting views. According to the list of the most important studies on the terms of trade issue, which was originally compiled by Nguyen (1981) and extended by Diakosavvas and Scandizzo (1991), neither side of the controversy can claim victory. The results obtained on secular trends differ according to the period explored, the definitions used and the estimation techniques employed. From the studies included in this list, about one-third confirm the Prebisch–Singer hypothesis and one fourth disprove it. The basic task in these studies was to prove, or disprove, the existence of a time trend in the data. In the cases that this is confirmed, economic forces exist which ‘push’ the terms of trade to follow a continuously improving or worsening deterministic course, with deviations from it being temporary. However, the predominant movement of a series over time in one direction may also be due to certain shocks that have permanent effects on the series, either in the form of a stochastic trend or of structural break(s). The separation of trends from structural breaks in the series requires carefully designed tests. This task is pursued in this paper for the case of commodity terms of trade using a data set covering almost the whole 20th century (1900–1998). This data set is probably the best that exists on this issue, and was developed at the World Bank by Grilli and Yang (1988) for the period 1900–1986 and extended to 1998 at the IMF. The original GY data set (1900–1986) has so far been used by researchers, including the compilers themselves, in order to provide more accurate evidence on the evolution of the primary commodity terms of trade. The compilers of the original data set, using the ‘traditional’ approach confirm the existence of a negative time trend in the relative primary commodity prices, which is implicit in the works of Prebisch and Singer. Among the other researchers who used the GY data set, Cuddington and Urzua (1989) [CU] introduced the distinction between deterministic and stochastic trends as well as the confounding effects of possible structural breaks when conducting unit root tests. CU suggested the existence of a structural break in 1920. Powell (1991), also, recognized the possibility of structural shifts in the terms of trade series and suggested three breaks, one in 1920 and two more at later dates. In both papers the timing of the shifts is selected in an ad hoc manner, while Powel, in addition, uses test statistics that do not take the shifts into account and the shift variables are arbitrarily constructed not allowing the measurement of the impact of the different structural breaks. In comparison to previous researchers, this paper: first, uses an extended GY data set covering almost the whole 20th century. Second, endogenizes the search for structural breaks. Third, uses more appropriate and more powerful tests for breaks. More specifically, the Lumsdaine–Papell unit root test is used which tests for the presence of two structural breaks at the same time. In this way, testing for trends in the commodity terms of trade leads to some very interesting results about the way the commodity terms of trade evolve over time and which has totally different policy implications than those of a deterministic or stochastic trend.

In sum, after accounting two structural breaks in 1920 and 1984, the terms of trade series is stationary; it does not follow a negative deterministic or stochastic trend. This, however, does not disprove the Prebisch–Singer thesis with regard to the direction of the barter terms of trade long run movement. Although the relative prices of primary commodities (compared to the manufactured goods) have not been falling gradually in the way implied by a time trend, two major negative structural breaks last century led to a decline in the relative prices of primary commodities. These downward shifts brought the terms of trade down to nearly one-third of their level at the beginning of the century. This is a very large deterioration in the terms of trade. In the intervening period of more than six decades between the two breaks, and despite the fluctuations, the mean level of the terms of trade was maintained. This finding has very important implications especially for the developing countries, which rely heavily on earnings from primary commodity exports to finance their development process. Specialization in primary commodity production seems to be detrimental in the long run. The finding of this study that the decline in the primary commodity terms of trade takes place in “installments” rather than in a gradual way, has further serious policy implications since, unlike gradual trends, the random shocks that are capable of having a permanent effect (structural break) cannot be easily predicted. Failure to predict the shocks may have serious consequences, as was the case with the more recent structural break. Thus, false reading about the future evolution of export earnings compounded by relatively low real interest rates led to a surge in external borrowing by developing countries and the well known debt problems of the 1980s following the collapse in international commodity prices. Such behavior of primary commodity terms of trade suggests greater export diversification by the developing countries. This is a risk reducing and export revenue increasing policy, and it should be a prime goal. Many developing countries have done considerable progress in this direction, especially after the last debt crisis. Of course, not all developing countries are affected in the same manner, since there may be specific commodities that exhibit even a positive trend. To the extent that declining terms of trade exist for the agricultural products produced by developed countries, this has serious implications for the funds devoted to farm support to sustain certain income levels as well as for the design of farm adjustment policies.