عنوان انگلیسی
Winners and losers in the commodity lottery: The impact of terms of trade growth and volatility in the Periphery 1870–1939
دانلود فوری مقاله + سفارش ترجمه 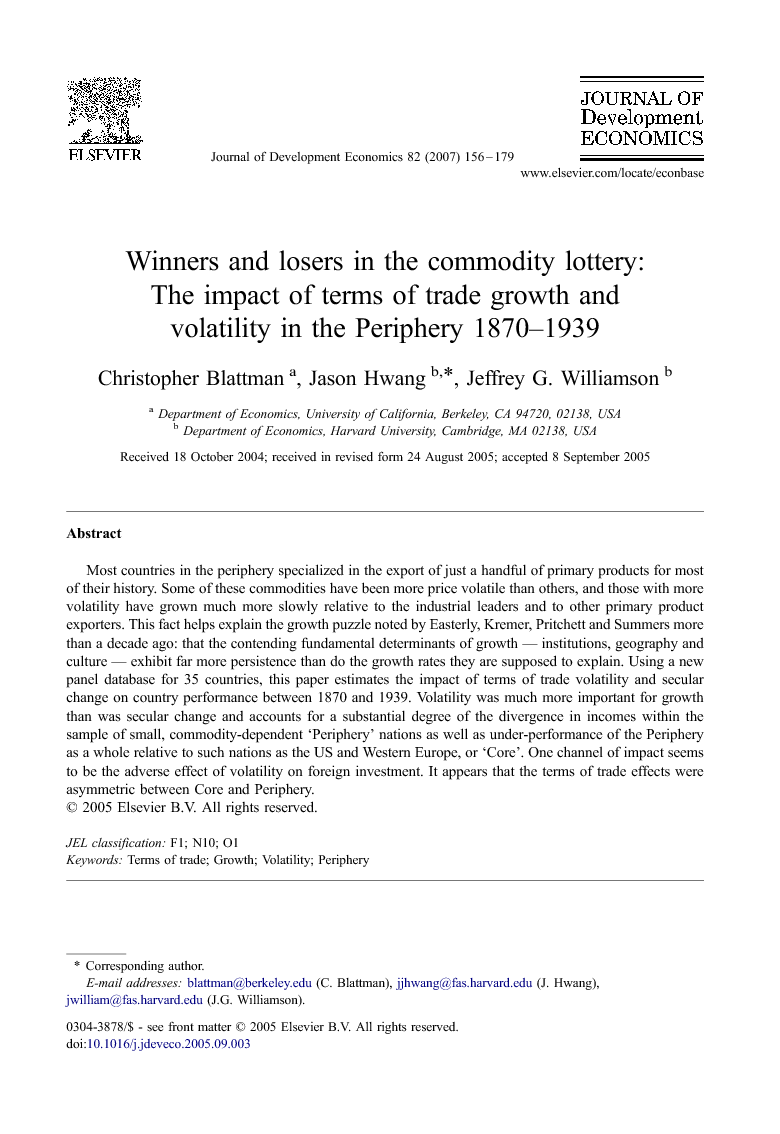 Most countries in the periphery specialized in the export of just a handful of primary products for most of their history. Some of these commodities have been more price volatile than others, and those with more volatility have grown much more slowly relative to the industrial leaders and to other primary product exporters. This fact helps explain the growth puzzle noted by Easterly, Kremer, Pritchett and Summers more than a decade ago: that the contending fundamental determinants of growth—institutions, geography and culture—exhibit far more persistence than do the growth rates they are supposed to explain. Using a new panel database for 35 countries, this paper estimates the impact of terms of trade volatility and secular change on country performance between 1870 and 1939. Volatility was much more important for growth than was secular change and accounts for a substantial degree of the divergence in incomes within the sample of small, commodity-dependent ‘Periphery’ nations as well as under-performance of the Periphery as a whole relative to such nations as the US and Western Europe, or ‘Core’. One channel of impact seems to be the adverse effect of volatility on foreign investment. It appears that the terms of trade effects were asymmetric between Core and Periphery.

Our analysis suggests that the terms of trade needs to be more central to our thinking about long term development. Commodity choice, dependence and the associated price trends and their volatility were especially powerful determinants of growth in the Periphery up to 1940. In focusing upon the forces that led to industrialization and diversification in Western Europe and the US, scholars may have forgotten that the rest of the world-rich and poor-took a different path. Some of the primary-product producing nations did quite well by this strategy—witness Canada, Australia, or Norway. Some, like India or Colombia, did quite poorly. Others were somewhere in the middle. The commodity-specialized were not uniformly slow-growing and poor. Neither were the prices of their commodities uniformly volatile and decreasing. In reconstructing nearly a century of terms of trade experience from 1870 to 1939 and assessing its impact on economic performance, we see that some commodities proved more volatile in price than others, and that those countries with more volatile terms of trade grew more slowly than other commodity-specialized nations. Countries with just one standard deviation higher volatility, moreover, grew on average more than half a percentage point per annum slower. The same difference in volatility seems to be associated with a third to two-thirds lower capital inflows. While our capital flows results are not large or as robust as our growth results, they still point to an important channel of impact. Other channels are likely to have been important too, such as the effect of terms of trade shocks on the incidence of civil conflict (Rodrik, 1999 and Miguel et al., 2004). The economic effects of our estimates are big. To illustrate the impact, consider an example from the primary product-exporting Periphery. Per capita income in Canada grew faster than in Indonesia by about 1% per annum. The difference in terms of trade volatility between the two countries was just under one half of one standard deviation. Our estimates imply that if, through good fortune, Indonesia had experienced the smaller terms of trade volatility of Canada, then Indonesia would have grown faster by about 0.3 percentage points, reducing the growth rate gap between them by a third. These magnitudes suggest that terms of trade fluctuations are a major force behind the big divergence in income levels among Periphery nations. Up to now, most development economists would explain the nineteenth and twentieth century take-off of Chile relative to Colombia in terms of geography, institutions, or culture. We argue that commodities probably mattered at least as much. By our estimates, producing and exporting a commodity with half the average level of volatility was associated with an annual increase in the rate of growth of a third to a half of a percentage point—a thirty to fifty percent improvement—as well as an increase in UK capital flows of roughly the same magnitude. What is also notable about our results is the asymmetry between Core and Periphery. Where terms of trade volatility was present in the Periphery, it created a significant drag on output growth. Elsewhere we show that this was not true of the Core—where it experienced the same high price volatility, it did not experience the same drag on growth. This asymmetry is consistent with two growth narratives. One, positive price shocks reinforced comparative advantage, and so they induced more industrialization in the Core and less in the Periphery. Two, it may be that rich countries with more sophisticated institutions and markets were better able to insure against price volatility than poor countries, so that terms of trade instability had a far bigger negative impact in the Periphery than in the Core. We await better data on institutional quality to test this hypothesis. In the meantime, our results are suggestive that terms of trade fluctuations were also a reason for divergence in income levels between the Core and Periphery. Volatility mattered little for the larger, diversified industrial nations, but volatility seems to have impacted the commodity-dependent nations adversely. The gap in growth rates in per capita income between Core and Periphery in our sample is 0.44 percentage points. If the Periphery had experienced the same volatility as the Core, ceteris paribus, this would have added 0.2 percentage points to average GDP per capita growth rates in the Periphery. This alone accounts for nearly half of the output per capita growth gap. Could countries in the Periphery have lessened the impact of volatile prices through judicious use of policy? Questions like this often arise in the resource curse literature. Given the adverse impact of resource-dependence, either through deindustrialization or price volatility, why did these countries not shift resources away from commodity production into something else? While we make no statements about the larger question raised by the resource curse literature, we believe resource-shifting was not really an option as a response to price volatility. As we argued earlier, the choice of commodities was better described as a “lottery” than as a policy choice. Nations seldom ‘switched’ commodities unless forced to do so. For example, Colombia only began as a producer of coffee in the late nineteenth century once cheap Indonesian exports undermined the Colombian tobacco export trade, forcing it to scramble for a decade to find a new product and a footing in world markets. Even if such a choice was possible, it would have been difficult to predict future price volatility with any degree of accuracy. Hence our finding for the period up to 1940 agrees with a view of the post-war period that good economic performance was as much the result of good luck as it was of good policy. More importantly still, we believe that commodities deserve at least as much attention as the current triumvirate of cultures, coastlines and constitutions.