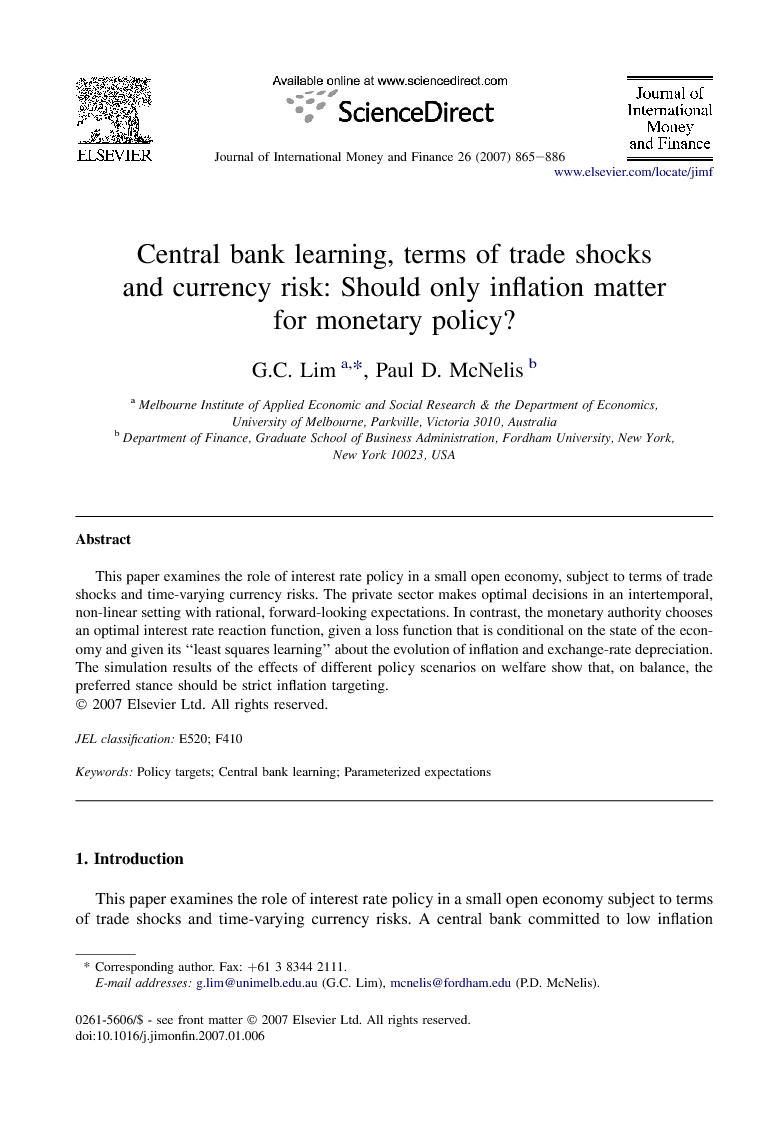 This paper examines the role of interest rate policy in a small open economy, subject to terms of trade shocks and time-varying currency risks. The private sector makes optimal decisions in an intertemporal, non-linear setting with rational, forward-looking expectations. In contrast, the monetary authority chooses an optimal interest rate reaction function, given a loss function that is conditional on the state of the economy and given its “least squares learning” about the evolution of inflation and exchange-rate depreciation. The simulation results of the effects of different policy scenarios on welfare show that, on balance, the preferred stance should be strict inflation targeting.

This paper has compared two alternative policy scenarios—strict and flexible inflation targeting—for an economy facing terms of trade shocks and time-varying currency risk. The central bank is also assumed not to have full information about all behavioral aspects of the economy; instead, it has to learn the laws of motion for its key target variables in order to set the interest rate according to a feedback rule. The results show that including exchange-rate changes in its learning and policy targeting framework improves welfare only in the case of very high exchange-rate pass-through. In this case, the probability of low welfare outcomes is reduced. This result has intuitive appeal. With information stickiness and a high degree of “pass-through”, it is harder for the central bank to learn effectively the laws of motion of inflation, since inflation is more volatile under high pass-through. Adding exchange-rate changes into the learning and targeting framework makes sense, since there are high information spillovers from exchange-rate changes to inflation. However, with low pass-through, it is easier for the central bank to learn the laws of motion of inflation. Finally, if information becomes more transparent, with no information stickiness, there is little or no case for including exchange-rate depreciation targets. The policy implication is that central banks which are already targeting inflation should resist pressures to adopt exchange-rate targets, except in very special cases of high pass-through and information stickiness.