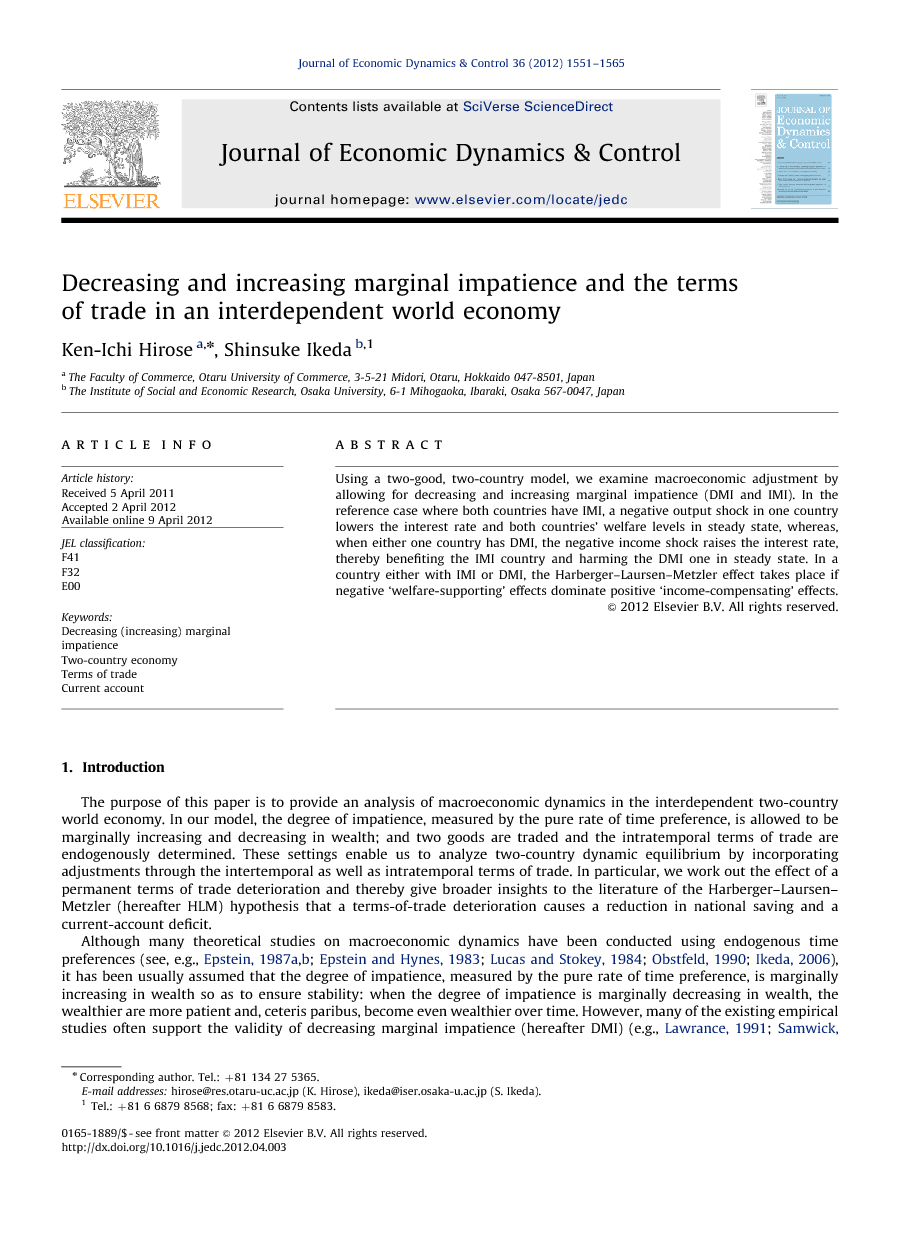 Using a two-good, two-country model, we examine macroeconomic adjustment by allowing for decreasing and increasing marginal impatience (DMI and IMI). In the reference case where both countries have IMI, a negative output shock in one country lowers the interest rate and both countries' welfare levels in steady state, whereas, when either one country has DMI, the negative income shock raises the interest rate, thereby benefiting the IMI country and harming the DMI one in steady state. In a country either with IMI or DMI, the Harberger–Laursen–Metzler effect takes place if negative ‘welfare-supporting’ effects dominate positive ‘income-compensating’ effects.

The purpose of this paper is to provide an analysis of macroeconomic dynamics in the interdependent two-country world economy. In our model, the degree of impatience, measured by the pure rate of time preference, is allowed to be marginally increasing and decreasing in wealth; and two goods are traded and the intratemporal terms of trade are endogenously determined. These settings enable us to analyze two-country dynamic equilibrium by incorporating adjustments through the intertemporal as well as intratemporal terms of trade. In particular, we work out the effect of a permanent terms of trade deterioration and thereby give broader insights to the literature of the Harberger–Laursen–Metzler (hereafter HLM) hypothesis that a terms-of-trade deterioration causes a reduction in national saving and a current-account deficit. Although many theoretical studies on macroeconomic dynamics have been conducted using endogenous time preferences (see, e.g., Epstein, 1987a and Epstein, 1987b; Epstein and Hynes, 1983; Lucas and Stokey, 1984, Obstfeld, 1990 and Ikeda, 2006), it has been usually assumed that the degree of impatience, measured by the pure rate of time preference, is marginally increasing in wealth so as to ensure stability: when the degree of impatience is marginally decreasing in wealth, the wealthier are more patient and, ceteris paribus, become even wealthier over time. However, many of the existing empirical studies often support the validity of decreasing marginal impatience (hereafter DMI) (e.g., Lawrance, 1991, Samwick, 1998, Harrison et al., 2002 and Ikeda et al., 2006). With retaining the stability of the equilibrium dynamics, we weaken the assumption of increasing marginal impatience (hereafter IMI) to focus on broader cases, cases A and B. In case A, consumers in the two countries commonly have the IMI-type time preferences; and in case B, one country has DMI whereas the other has IMI. The present study is, to our best knowledge, the first attempt to solve two-good, two-country equilibrium dynamics under variable time preferences. Using a small country setting, Obstfeld (1982) shows that the HLM effect is incompatible with the IMI-type time preference. Ikeda (2001) points out that this result may be modified by incorporating weakly non-separable preference. Svensson and Razin (1983) also examine the HLM effect in a small country framework with variable time preference. Although they discuss on the case of the DMI, there exists a possibility that instability due to DMI will violate the assumption of a small country. Devereux and Shi (1991) develop a two-country model with IMI. Their one-good model however cannot deal with problems concerning intratemporal terms of trade. The literature on decreasing marginal impatience includes Das (2003) and Hirose and Ikeda (2008). Das (2003) first verifies that DMI is compatible with dynamic stability in the production economy with capital. Hirose and Ikeda (2008) show the solution properties under DMI including optimal satiated consumption. They, however, do not discuss on the general equilibrium implications of DMI under agent/country heterogeneity. In contrast, our model can investigate the interaction between the intertemporal (i.e., the interest rate) and the intratemporal terms of trade in the two-country world economy. For example, in case A, where two countries exhibit IMI a permanent negative output shock in one country leads to a fall in the steady-state interest rate as well as a terms-of-trade deterioration in this country. In case B, where one country has IMI and the other has DMI, on the other hand, a permanent negative output shocks, leading to a terms-of-trade deterioration in the country experiencing the shock, causes a rise in the steady-state interest rate, whether the shock takes place either in the IMI or DMI country. Incorporating these effects together, we show that: (i) in case A, a negative output shock in either country definitely lowers the two countries' welfare levels in the long run; and that (ii) in case B, a negative output shock in either country definitely benefits the IMI country while it harms the DMI country in the long run. In either case, the effects on the steady-state consumption can be obtained as the combination of (a) the income effects, determined from the changes in the steady-state utilities associated with a change in the steady-state interest rate; and (b) the substitution effects, caused by the changes in the terms-of-trade. It is also shown that the terms-of-trade deterioration affects the long-run accumulation of net foreign assets and hence the interim current account through three channels: firstly, the income-compensating effect, representing wealth accumulation to compensate the decrease in the real income, is always positive. Secondly, the welfare-supporting effect, which can either be positive or negative, according to whether the steady-state welfare level rises or falls. Thirdly, the interest-income effect, due to changes in the interest income, also can be either positive or negative, depending on the signs of the effect on the interest rate and on which country is the net creditor. The (in)validity of the HLM effect depends on the signs and relative magnitudes of the three effects. Even in case A, where the two countries have IMI, the HLM effect can be valid, unlike Obstfeld's (1982) prediction that the HLM effect is invalid for a IMI country, if the negative welfare-supporting effect dominates the positive income-compensating effect. In the asymmetric impatience case, i.e., case B, when the DMI country experiences a negative output shock, in contrast, the Obstfeld (1982) result is necessarily true if the interest-income effect is negligible. When the IMI country experiences a negative output shock, the HLM effect can be rehabilitated again. The remainder of the paper is organized as follows. Section 2 constructs a two-country two-good model with endogenous time preference. Section 3 obtains the steady-state equilibrium. Section 4 investigates the steady-state effects of permanent output shocks. Section 5 develops a re-examination of the HLM effect. Section 6 concludes the paper.

This paper has developed a two-good model in a two-country world economy with endogenous time preference. Then, it has been shown that the effects of permanent output shocks depend on whether the country which experiences an output shock and its neighbor country exhibit IMI or DMI, respectively. Through a re-examination of the HLM effect, we have pointed out that the effect of a terms-of-trade deterioration caused by income shocks on the current account is decomposed into the income-compensating effect, the welfare-supporting effect, and the interest-income effect. Either in an IMI country or in a DMI country, the HLM effect can materialize if the negative welfare-supporting effect dominates the positive income-compensating effect. The model could be regarded as a comprehensive extension of Obstfeld (1982), which focuses only on the income-compensating effects using a small IMI country model. The results add richer insights to the literature. Interesting future research includes introducing capital accumulation, weakening the assumption of homothetic preferences, and incorporating behavioral theory of time discounting.