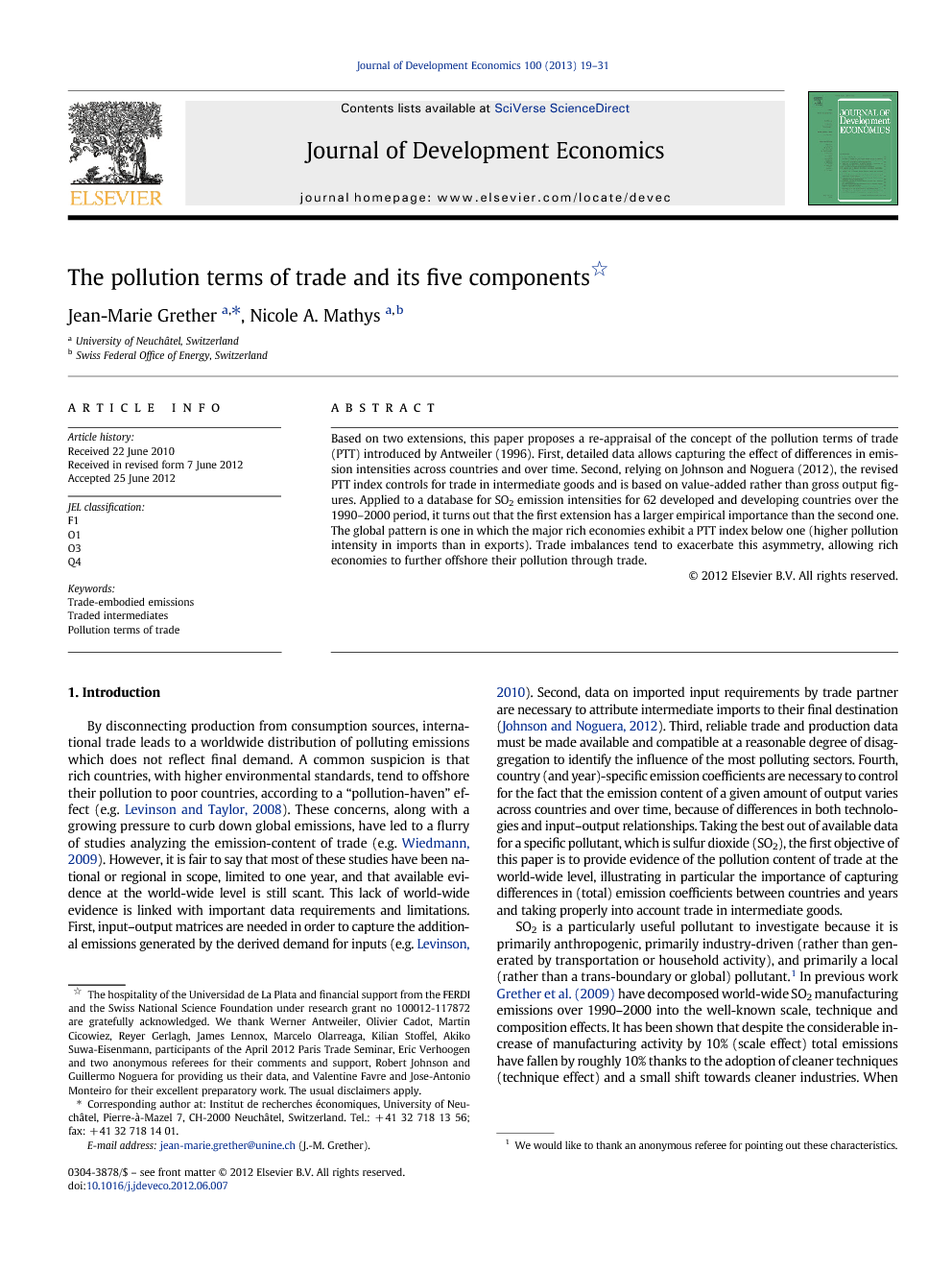 Based on two extensions, this paper proposes a re-appraisal of the concept of the pollution terms of trade (PTT) introduced by Antweiler (1996). First, detailed data allows capturing the effect of differences in emission intensities across countries and over time. Second, relying on Johnson and Noguera (2012), the revised PTT index controls for trade in intermediate goods and is based on value-added rather than gross output figures. Applied to a database for SO2 emission intensities for 62 developed and developing countries over the 1990–2000 period, it turns out that the first extension has a larger empirical importance than the second one. The global pattern is one in which the major rich economies exhibit a PTT index below one (higher pollution intensity in imports than in exports). Trade imbalances tend to exacerbate this asymmetry, allowing rich economies to further offshore their pollution through trade.

In an increasingly integrated but highly heterogeneous world, international trade leads to a spatial distribution of pollution across countries that might benefit some countries and hurt others in a non-trivial way. Starting with trade imbalances, even if embodied emissions per dollar were identical for all goods, a country running a trade deficit would be able to shift emissions abroad as those emissions contained in its imports are larger than those included in its exports. But trade imbalances are normally temporary, and even if they persist, their effect on net imported emissions from abroad may be secondary when compared with the other main source of unbalanced trade in emission, which is the relative pollution content of exports, better known as the pollution terms of trade (PTT) of a country. The more a country specializes in clean activities, the lower its PTT index, and the more it manages to offshore pollution abroad. This paper discusses the issues surrounding the appropriate measurement of the PTT index and looks for empirical regularities based on SO2 emission data for a large sample of countries. Two major caveats are raised regarding measurement. First, one should control for differences in emission intensities, over time, between sectors and across countries, by relying on richer databases. This allows decomposing changes in the PTT index into three initial basic effects: the between sector, between country and technique effect. Second, as intermediate goods are traded as well as final goods, an appropriate calculation of trade-embodied emissions should be based on a world input–output table rather than separate national ones. This presents the additional advantage of attributing each production activity to the final demand it is aimed to satisfy, sorting out the complexities of internationally integrated production chains. Moreover, it avoids double counting in trade flows by relying on the value-added content of trade rather than output flows. This leads to two further correction terms adjusting the PTT index: an intermediate trade effect and a value-added effect. Relying on a rich database for SO2 emissions intensities, and controlling for input–output relationships and intermediate trade flows, our analysis suggests that of the two caveats raised above, the first one has the largest empirical importance. Amongst the five effects that compose the PTT index, the differences of emission intensities between countries and over time turn out to be the strongest determinants. Incidentally, this allows to overcome the original paradox reported by Antweiler (1996), as the adjusted PTT index turns out to be negatively associated with GDP per capita (and significantly so in a regression controlling for fixed effects, with an elasticity of − 0.65). The intermediate trade and value-added effects exhibit a weaker influence. This may appear relatively surprising as these effects imply substantial modifications of trade flows, but one should keep in mind that the PTT index is a relative measure, and the fact that the intermediate trade and value-added effects do not change much PTT estimates simply means that the corresponding absolute changes in trade flows have not a strong correlation with emission intensities. Overall, and combining PTT values with trade imbalances, the general pattern in terms of pollution offshoring is one under which most large environmental winners are large rich countries (except for India) and where large environmental losers are large emerging economies (except for Spain and Australia). Gains and losses are fairly concentrated, representing more than 15% of world trade embodied emissions for the two countries located at the extreme of the distribution (USA, the largest winner, and China, the largest loser). It should be clearly stated that the zero-sum game indicator of net environmental gain used in this paper (and many others) is only an accounting measure of trade-embodied emissions, which lies far away from a proper general equilibrium analysis of the impact of trade on the environment (see Antweiler et al., 2001 for a thorough analysis of the SO2 case). However, it deserves interest for at least two reasons. First, when the impact of pollution is mainly local, it is indeed a measure of the environmental damage which is transferred abroad through trade. Second, even when the impact of pollution is regional (SO2) or global (CO2), it is a measure of the additional burden that domestic consumption imposes on the community of trading partners, a critical dimension to design appropriate international environmental agreements. Two final caveats are in order. First, even if we tried to take the best out of available data, caution is required in analyzing results given the adjustment procedures that had to be followed, in particular to estimate emission intensities, input–output coefficients or implicit trade flows. More empirical efforts based on better quality data are certainly needed in the future, in particular for local pollutants and for those two effects of major revealed importance i.e. the between-country and the technique effect. Second, given the greening of production technologies, one may argue that the severity of the problem may vanish over time. However this technique effect has to be balanced with the scale effect arising from the continuous increase in trade flows. In the case of SO2 during the nineties, although emission coefficients decreased in most countries, exports and imports flows boomed to such an extent that the total amount of emissions embodied in world trade did increase. Whether these trends will continue or be reversed in the future is still an open question.