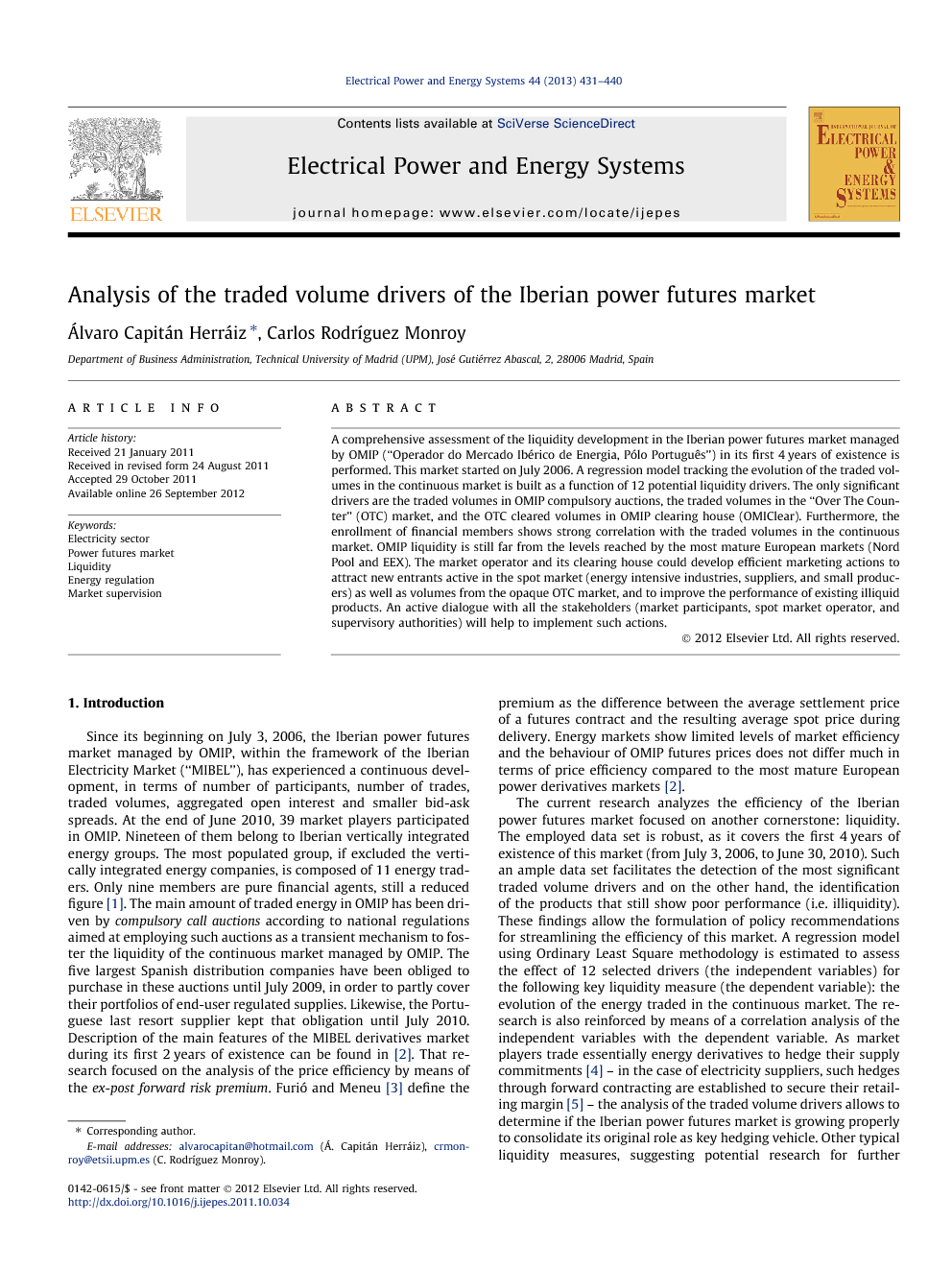 A comprehensive assessment of the liquidity development in the Iberian power futures market managed by OMIP (“Operador do Mercado Ibérico de Energia, Pólo Português”) in its first 4 years of existence is performed. This market started on July 2006. A regression model tracking the evolution of the traded volumes in the continuous market is built as a function of 12 potential liquidity drivers. The only significant drivers are the traded volumes in OMIP compulsory auctions, the traded volumes in the “Over The Counter” (OTC) market, and the OTC cleared volumes in OMIP clearing house (OMIClear). Furthermore, the enrollment of financial members shows strong correlation with the traded volumes in the continuous market. OMIP liquidity is still far from the levels reached by the most mature European markets (Nord Pool and EEX). The market operator and its clearing house could develop efficient marketing actions to attract new entrants active in the spot market (energy intensive industries, suppliers, and small producers) as well as volumes from the opaque OTC market, and to improve the performance of existing illiquid products. An active dialogue with all the stakeholders (market participants, spot market operator, and supervisory authorities) will help to implement such actions.

Since its beginning on July 3, 2006, the Iberian power futures market managed by OMIP, within the framework of the Iberian Electricity Market (“MIBEL”), has experienced a continuous development, in terms of number of participants, number of trades, traded volumes, aggregated open interest and smaller bid-ask spreads. At the end of June 2010, 39 market players participated in OMIP. Nineteen of them belong to Iberian vertically integrated energy groups. The most populated group, if excluded the vertically integrated energy companies, is composed of 11 energy traders. Only nine members are pure financial agents, still a reduced figure [1]. The main amount of traded energy in OMIP has been driven by compulsory call auctions according to national regulations aimed at employing such auctions as a transient mechanism to foster the liquidity of the continuous market managed by OMIP. The five largest Spanish distribution companies have been obliged to purchase in these auctions until July 2009, in order to partly cover their portfolios of end-user regulated supplies. Likewise, the Portuguese last resort supplier kept that obligation until July 2010. Description of the main features of the MIBEL derivatives market during its first 2 years of existence can be found in [2]. That research focused on the analysis of the price efficiency by means of the ex-post forward risk premium. Furió and Meneu [3] define the premium as the difference between the average settlement price of a futures contract and the resulting average spot price during delivery. Energy markets show limited levels of market efficiency and the behaviour of OMIP futures prices does not differ much in terms of price efficiency compared to the most mature European power derivatives markets [2]. The current research analyzes the efficiency of the Iberian power futures market focused on another cornerstone: liquidity. The employed data set is robust, as it covers the first 4 years of existence of this market (from July 3, 2006, to June 30, 2010). Such an ample data set facilitates the detection of the most significant traded volume drivers and on the other hand, the identification of the products that still show poor performance (i.e. illiquidity). These findings allow the formulation of policy recommendations for streamlining the efficiency of this market. A regression model using Ordinary Least Square methodology is estimated to assess the effect of 12 selected drivers (the independent variables) for the following key liquidity measure (the dependent variable): the evolution of the energy traded in the continuous market. The research is also reinforced by means of a correlation analysis of the independent variables with the dependent variable. As market players trade essentially energy derivatives to hedge their supply commitments [4] – in the case of electricity suppliers, such hedges through forward contracting are established to secure their retailing margin [5] – the analysis of the traded volume drivers allows to determine if the Iberian power futures market is growing properly to consolidate its original role as key hedging vehicle. Other typical liquidity measures, suggesting potential research for further analysis of this relatively young market, are the bid-ask spreads [6], the open interest [7], the volatility and sensitivity of prices to additional demand [8], and the resilience [9]. The term resilience, whose original use comes from Physics, is widely used in other scientific areas, as Finance – related to the robustness of the financial institutions or even the whole financial system [10]. In the case of liquid energy markets, prices must be resilient to large orders [9]. In the Iberian power futures market, the resilience is mainly secured by the market regulation, as the market operator establishes maximum price variation limits. The orders exceeding such limits cannot be matched [11]. Additionally, The Spanish Energy Commission (Comisión Nacional de Energía, CNE) performs weekly monitoring of the evolution of the power futures prices and the OTC prices, by means of charts of OMIP settlement prices and OTC weighted average prices [12]. As deviations between the values of both price series are not usual, the resilience is also found in the OTC market, strengthening the forward market integrity. The article is structured as follows: (i) Section 2 performs a literature review of relevant studies regarding liquidity of energy markets; (ii) Section 3 provides a comprehensive overview of the Iberian power futures market, including a basic description of the coexistent regulated forward contracting mechanisms, and comparison with the liquidity levels of the Spanish OTC market and with the most mature European power futures markets; (iii) Section 4 performs a thorough analysis of the traded volume drivers in OMIP continuous market by means of a regression model and correlation analysis; (iv) Section 5 formulates recommendations for the proper development of this market; (v) Section 6 concludes summarizing the main findings and suggesting further research.

Since its beginning on July 3, 2006, the Iberian power futures market managed by OMIP has experienced a steady development, in terms of number of participants and traded volumes. Nevertheless, OMIP liquidity is still poor compared to other more mature European power futures markets (Nord Pool and EEX) [1,23,34– 37]. Therefore, whereas Nord Pool and EEX can be located at the top of a graphical liquidity pyramid composed of three layers in a bottom–up approach, OMIP still strives to enter the intermediate layer. In this sense, whereas OMIP transparency compares well with those exchanges regarding public data availability, contributing such data transparency to trading confidence and thus liquidity growth [21,43], bigger efforts and resources should be employed by OMIP to provide timely and more analytical market monitoring reports as the other exchanges usually do. A regression model is built to identify the main factors behind the development of one key liquidity measure: the traded volumes in OMIP continuous market. The model is composed of 12 parameters (independent variables) theoretically contributing to the development of the traded volumes in the continuous market (the dependent variable). According to the regression results, the only significant parameters acting as effective liquidity drivers are the traded volumes in the dominant OTC market, the OTC cleared volumes by OMIClear, and the call auctions in which the Spanish distribution companies and the Portuguese last resort supplier are obliged to purchase energy according to national legislation. Additionally, correlation analysis of the 12 variables with the traded volumes in the continuous market also shows a significant correlation of the enrollment of financial agents. Therefore, marketing incentives to attract these players could increase the trading activity in the continuous market. Apart from that potential group of new entrants, there is still much room for new enrollments in OMIP, especially for large industrial users and suppliers active in the spot market and small producers. The enrollment of these companies would create a more balanced structure in the market [6,31]. Apart from increasing the trading activity, it would facilitate a less biased price formation in terms of forward risk premium [2,3]. On the other hand, specific commission discounts for the large vertically integrated groups to trade in OMIP and clear OTC volumes in OMIClear would bring price transparency and liquidity growth [24], in case such vertically integrated utilities were active OTC participants. The market operator could establish specific market maker agreements [15], commission discounts, and auctions complementary to the continuous market to boost the still illiquid products. The market operator and its clearing house should hold a permanent dialogue with all the stakeholders, both with the agents and the spot market operator (as attractive products can only be offered if they respond to real market needs) and with the supervisory agencies (as new developments in market rules should improve the market efficiency). Collaborative efforts between market operator and supervisory agencies create strong synergies: the market operator could invite the supervisory agencies to provide feedback about its analyses measuring the performance of new business developments. Such shared vision would benefit both entities due to the liquidity and efficiency gains. Social welfare would increase as well, positively contributing to a better price formation of end user’s electricity prices. Further research is encouraged by analyzing the evolution of other liquidity measures, as the bid-ask spreads [6], the open interest [7], the volatility and sensitivity of prices to additional demand [8], and the resilience [9]. Especially interesting, in a context of high volatility in financial and commodities markets [4], would be the research about the open interest in OMIP futures market: whereas the daily trading volume reflects movements in the speculative activity, the daily open interest captures hedging activities as it excludes intraday positions taken by day traders, mainly inspired by speculative reasons [7]. Additionally, the research can also be enriched by consulting literature regarding similar experiences in North American energy derivatives markets and by analyzing the impact of coming new financial legislation in European and North American markets [42,43].