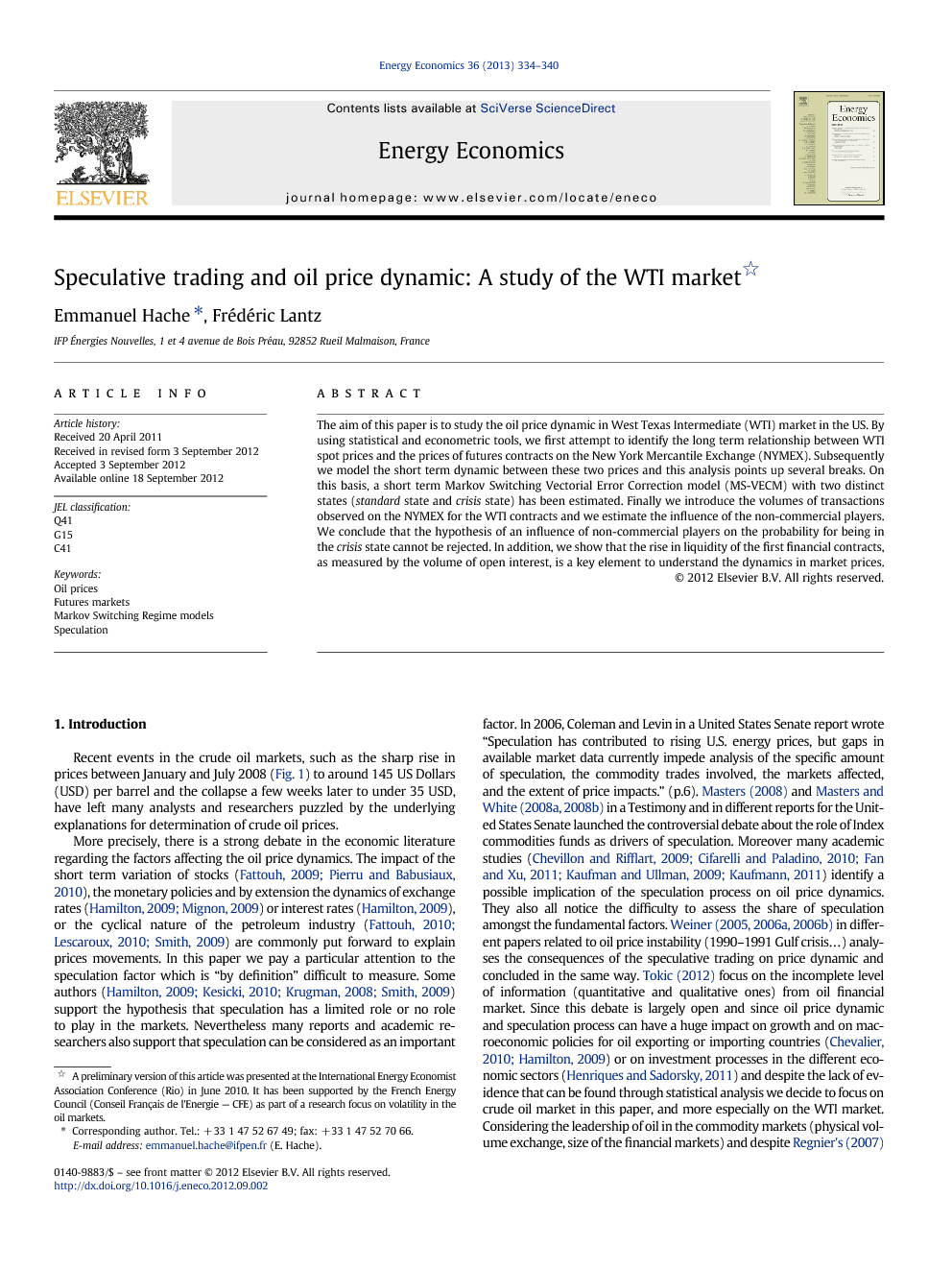 The aim of this paper is to study the oil price dynamic in West Texas Intermediate (WTI) market in the US. By using statistical and econometric tools, we first attempt to identify the long term relationship between WTI spot prices and the prices of futures contracts on the New York Mercantile Exchange (NYMEX). Subsequently we model the short term dynamic between these two prices and this analysis points up several breaks. On this basis, a short term Markov Switching Vectorial Error Correction model (MS-VECM) with two distinct states (standard state and crisis state) has been estimated. Finally we introduce the volumes of transactions observed on the NYMEX for the WTI contracts and we estimate the influence of the non-commercial players. We conclude that the hypothesis of an influence of non-commercial players on the probability for being in the crisis state cannot be rejected. In addition, we show that the rise in liquidity of the first financial contracts, as measured by the volume of open interest, is a key element to understand the dynamics in market prices.

Recent events in the crude oil markets, such as the sharp rise in prices between January and July 2008 (Fig. 1) to around 145 US Dollars (USD) per barrel and the collapse a few weeks later to under 35 USD, have left many analysts and researchers puzzled by the underlying explanations for determination of crude oil More precisely, there is a strong debate in the economic literature regarding the factors affecting the oil price dynamics. The impact of the short term variation of stocks (Fattouh, 2009 and Pierru and Babusiaux, 2010), the monetary policies and by extension the dynamics of exchange rates (Hamilton, 2009 and Mignon, 2009) or interest rates (Hamilton, 2009), or the cyclical nature of the petroleum industry (Fattouh, 2010, Lescaroux, 2010 and Smith, 2009) are commonly put forward to explain prices movements. In this paper we pay a particular attention to the speculation factor which is “by definition” difficult to measure. Some authors (Hamilton, 2009, Kesicki, 2010, Krugman, 2008 and Smith, 2009) support the hypothesis that speculation has a limited role or no role to play in the markets. Nevertheless many reports and academic researchers also support that speculation can be considered as an important factor. In 2006, Coleman and Levin in a United States Senate report wrote “Speculation has contributed to rising U.S. energy prices, but gaps in available market data currently impede analysis of the specific amount of speculation, the commodity trades involved, the markets affected, and the extent of price impacts.” (p.6). Masters (2008) and Masters and White, 2008a and Masters and White, 2008b in a Testimony and in different reports for the United States Senate launched the controversial debate about the role of Index commodities funds as drivers of speculation. Moreover many academic studies (Chevillon and Rifflart, 2009, Cifarelli and Paladino, 2010, Fan and Xu, 2011, Kaufman and Ullman, 2009 and Kaufmann, 2011) identify a possible implication of the speculation process on oil price dynamics. They also all notice the difficulty to assess the share of speculation amongst the fundamental factors. Weiner, 2005, Weiner, 2006a and Weiner, 2006b in different papers related to oil price instability (1990–1991 Gulf crisis…) analyses the consequences of the speculative trading on price dynamic and concluded in the same way. Tokic (2012) focus on the incomplete level of information (quantitative and qualitative ones) from oil financial market. Since this debate is largely open and since oil price dynamic and speculation process can have a huge impact on growth and on macroeconomic policies for oil exporting or importing countries (Chevalier, 2010 and Hamilton, 2009) or on investment processes in the different economic sectors (Henriques and Sadorsky, 2011) and despite the lack of evidence that can be found through statistical analysis we decide to focus on crude oil market in this paper, and more especially on the WTI market. Considering the leadership of oil in the commodity markets (physical volume exchange, size of the financial markets) and despite Regnier's (2007) results on the fact that crude oil market is not significantly more volatile than other commodities over a period of 60 years (1945–2005), we will analyse the interactions that may exist between the physical crude oil price and the level of activity in financial oil markets during the 1993–2011 period and more especially during 2007–2008 “oil bubbling”. Our main assumption relates to the fact that speculative trading can help in understanding the oil price dynamic during financial instability and that speculation can exacerbate the dynamic observed in the oil market during tension periods whereas it won't appear as a determinant factor during «normal» or bearish period. This assumption leads us to adopt a specific econometric methodology based on non-linear models, a Markov chain model which allows for changes in the short run dynamic and we estimate a short term Markov Switching Vectorial Error Correction model (MS-VECM) with two distinct states (standard state and crisis state). In the first section, we briefly define the major changes introduced by the new regulations of the Commodity Futures Trading Commission (CFTC) in 2000 and the consequences in term of transaction volumes. In the second section, we present data and standard tests (unit root and cointegration tests) used to analyse the long term equilibrium between spot and WTI prices. In the third section we present the Markov Switching Vectorial Error Correction (MS‐VEC) methodology and the probit model that will help us to analyse the trader's behaviour on the short run. The main conclusions are summarised in the final section.

In this paper we analyse the oil price dynamic in WTI markets in the United States from 1999 to 2011. From the cointegration test, we could not reject the hypothesis of a long term equilibrium between spot and future prices. Nevertheless, two distinct states (so-called “standard” and “crisis” states) should be distinguished for the short term dynamic. Subsequently, we cannot reject the hypothesis that variations in the positions of non-commercial players in the financial markets for crude oil may affect the probability that the standard state will prevail. The behaviour of non-commercial players may thus play a destabilising role in petroleum markets. Thus speculative trading can be considered as an important factor during market instability and “oil bubbling” process. This development should be linked to that observed in the major commodity markets (e.g. NYMEX), that is, a marked rise in transaction volumes dealing with futures contracts, in particular on the shortest maturities (2 to 4 months), and more especially since 2004. Additionally, our probit model shows clearly the importance of changes in the amount of open interest in the switch between states. In order to get a full understanding of the speculative trading process in the financial oil markets, this paper need be completed. The same methodology could be applied to other commodity markets (non ferrous metals and grains) which were subjects to price instability since 2006. Indeed Robles et al. (2009) in a study dedicated to grain markets concluded: “Changes in supply and demand fundamentals cannot fully explain the recent drastic increase in food prices. Rising expectations, speculation, hoarding, and hysteria also played a role in the increasing level and volatility of food prices.” Thus it could help to understand if there is a trading specificity attached to the oil market. It could also help to deepen the role of commodities trading funds in the spill-over effects between all the commodities financial markets and within all the commodities prices dynamics.