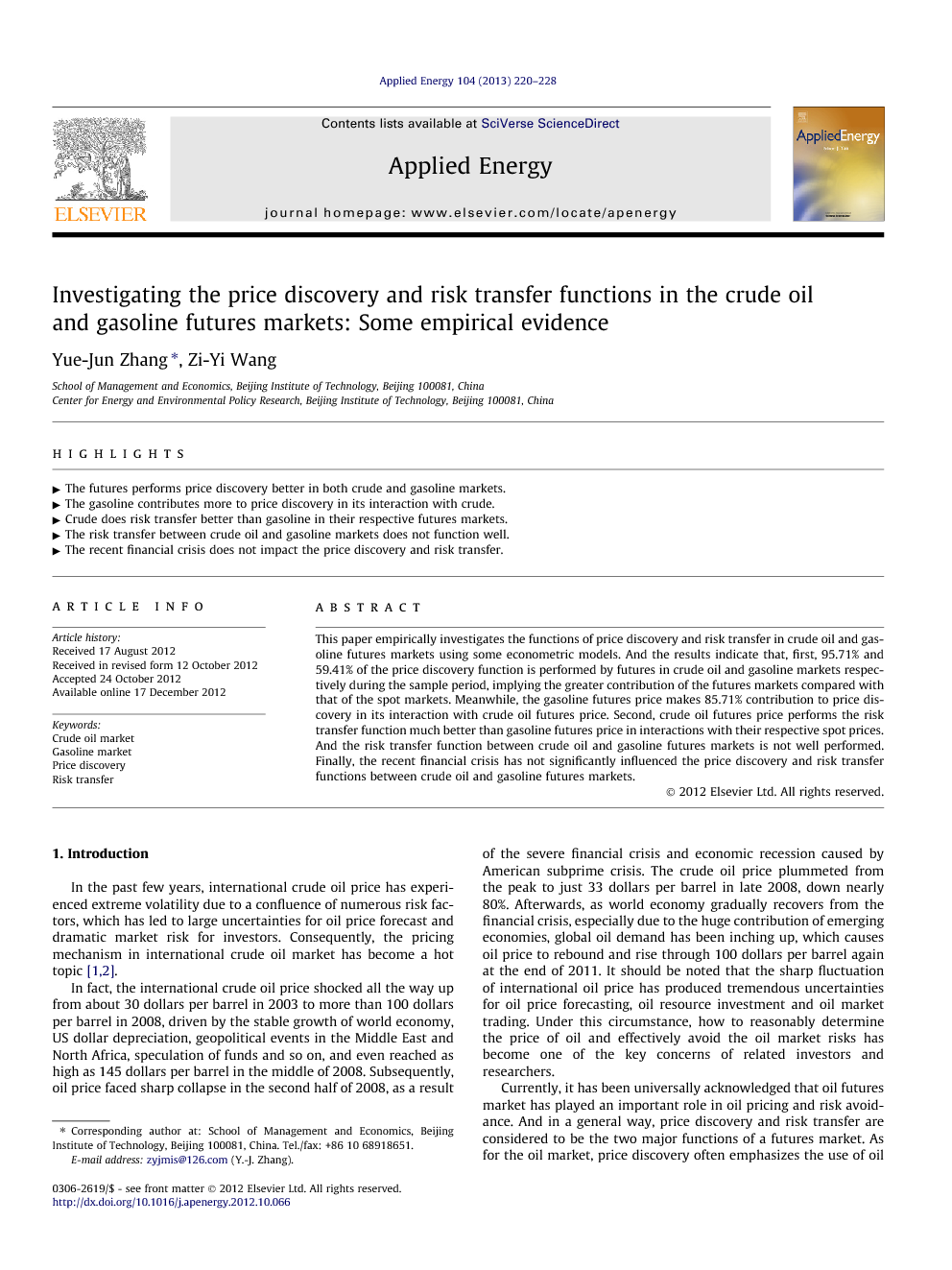 In the past few years, international crude oil price has experienced extreme volatility due to a confluence of numerous risk factors, which has led to large uncertainties for oil price forecast and dramatic market risk for investors. Consequently, the pricing mechanism in international crude oil market has become a hot topic [1] and [2]. In fact, the international crude oil price shocked all the way up from about 30 dollars per barrel in 2003 to more than 100 dollars per barrel in 2008, driven by the stable growth of world economy, US dollar depreciation, geopolitical events in the Middle East and North Africa, speculation of funds and so on, and even reached as high as 145 dollars per barrel in the middle of 2008. Subsequently, oil price faced sharp collapse in the second half of 2008, as a result of the severe financial crisis and economic recession caused by American subprime crisis. The crude oil price plummeted from the peak to just 33 dollars per barrel in late 2008, down nearly 80%. Afterwards, as world economy gradually recovers from the financial crisis, especially due to the huge contribution of emerging economies, global oil demand has been inching up, which causes oil price to rebound and rise through 100 dollars per barrel again at the end of 2011. It should be noted that the sharp fluctuation of international oil price has produced tremendous uncertainties for oil price forecasting, oil resource investment and oil market trading. Under this circumstance, how to reasonably determine the price of oil and effectively avoid the oil market risks has become one of the key concerns of related investors and researchers. Currently, it has been universally acknowledged that oil futures market has played an important role in oil pricing and risk avoidance. And in a general way, price discovery and risk transfer are considered to be the two major functions of a futures market. As for the oil market, price discovery often emphasizes the use of oil futures price for pricing spot price [3] and [4]; put another way, the oil futures price may lead the movement of spot price. And risk transfer or hedging function often denotes that hedgers in oil market use oil futures contracts to shift price risk to others [3]. In addition, due to the close relationship between crude oil and gasoline products, investigating the interactive mechanism of the two markets has attracted much attention. As we know, crude oil is mainly refined into gasoline, diesel, kerosene and other oil products, which are the most direct fuel of modern vehicles. In particular, there exists close linkage between gasoline and people’s daily life, and the change of gasoline price has large influence on people’s living cost. Therefore, in this paper, we also extend the connotation of price discovery and risk transfer functions to investigate how the crude oil and gasoline markets may lead or lag each other and to measure the arbitrage risk between these two markets. The research results may provide some references for price forecasting and risk avoidance in both crude oil and gasoline markets. The remainder of the paper proceeds as follows. Section 2 briefly reviews the existing related literature. Section 3 presents the empirical study methodologies and data definitions. Section 4 provides the empirical results and discussion. Finally, Section 5 puts forward some concluding remarks.