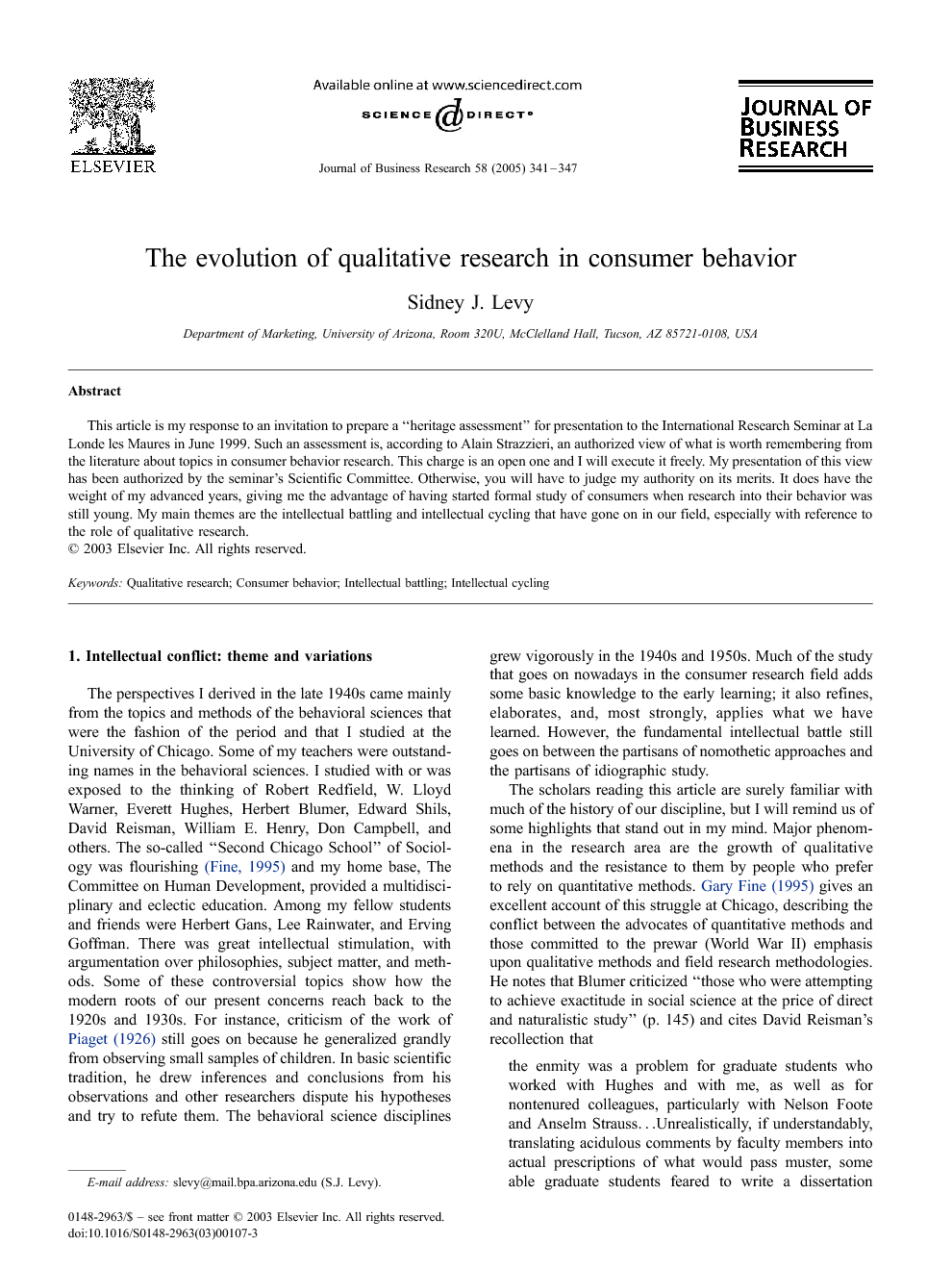 This article is my response to an invitation to prepare a “heritage assessment” for presentation to the International Research Seminar at La Londe les Maures in June 1999. Such an assessment is, according to Alain Strazzieri, an authorized view of what is worth remembering from the literature about topics in consumer behavior research. This charge is an open one and I will execute it freely. My presentation of this view has been authorized by the seminar's Scientific Committee. Otherwise, you will have to judge my authority on its merits. It does have the weight of my advanced years, giving me the advantage of having started formal study of consumers when research into their behavior was still young. My main themes are the intellectual battling and intellectual cycling that have gone on in our field, especially with reference to the role of qualitative research.

The perspectives I derived in the late 1940s came mainly from the topics and methods of the behavioral sciences that were the fashion of the period and that I studied at the University of Chicago. Some of my teachers were outstanding names in the behavioral sciences. I studied with or was exposed to the thinking of Robert Redfield, W. Lloyd Warner, Everett Hughes, Herbert Blumer, Edward Shils, David Reisman, William E. Henry, Don Campbell, and others. The so-called “Second Chicago School” of Sociology was flourishing (Fine, 1995) and my home base, The Committee on Human Development, provided a multidisciplinary and eclectic education. Among my fellow students and friends were Herbert Gans, Lee Rainwater, and Erving Goffman. There was great intellectual stimulation, with argumentation over philosophies, subject matter, and methods. Some of these controversial topics show how the modern roots of our present concerns reach back to the 1920s and 1930s. For instance, criticism of the work of Piaget (1926) still goes on because he generalized grandly from observing small samples of children. In basic scientific tradition, he drew inferences and conclusions from his observations and other researchers dispute his hypotheses and try to refute them. The behavioral science disciplines grew vigorously in the 1940s and 1950s. Much of the study that goes on nowadays in the consumer research field adds some basic knowledge to the early learning; it also refines, elaborates, and, most strongly, applies what we have learned. However, the fundamental intellectual battle still goes on between the partisans of nomothetic approaches and the partisans of idiographic study. The scholars reading this article are surely familiar with much of the history of our discipline, but I will remind us of some highlights that stand out in my mind. Major phenomena in the research area are the growth of qualitative methods and the resistance to them by people who prefer to rely on quantitative methods. Gary Fine (1995) gives an excellent account of this struggle at Chicago, describing the conflict between the advocates of quantitative methods and those committed to the prewar (World War II) emphasis upon qualitative methods and field research methodologies. He notes that Blumer criticized “those who were attempting to achieve exactitude in social science at the price of direct and naturalistic study” (p. 145) and cites David Reisman's recollection that the enmity was a problem for graduate students who worked with Hughes and with me, as well as for nontenured colleagues, particularly with Nelson Foote and Anselm Strauss…Unrealistically, if understandably, translating acidulous comments by faculty members into actual prescriptions of what would pass muster, some able graduate students feared to write a dissertation without tables in it…I sometimes had the dismal experience of having as a doctoral candidate someone who had been a spirited undergraduate and watching that person become more timid and less original as time went by. (Reisman, in Berger, 1990, p. 63) More than 50 years later, when I ran a workshop on qualitative research, one of the doctoral students responded with this fretful statement: I suppose what I mean is that there has to be a certain consistency in epistemology, ontological assumptions, and the use of techniques of data collection and presentation. Why do we have to constantly justify the use of certain techniques, and why do we willingly or unwillingly participate in perpetuating the dominance of a particular discourse of “doing research;” in other words, why are we ashamed to be purely qualitative, just as we are not ashamed to be purely quantitative? I find that I am constantly grappling with this in my own research, and would like to find a way of dealing with this issue, so that we can have other ways of collecting, analyzing, and presenting data. One wonders about the persistence of this contentiousness, and the lack of objectivity shown by so many academicians with doctorates to their names. These remarks are true for fields other than marketing: a professor of finance recently raved in my presence that he hated the behavioral people he believed were ruining his field. This struggle has a certain one-sidedness to it as the quantitative people have the dominant paradigm and the greater power. Scholars who are interested in qualitative research usually understand the role of measurement and do not deny its value and even the need for it in the large place it occupies in the activities of the research world. They believe that they are bringing new and useful insights to the marketing field. These scholars mainly would like to be free to do their kinds of research, to get it published, and to be hired as regular members of a faculty. However, generally, the dominant paradigm people resist, show great hostility, and at many schools refuse to hire any faculty who are qualitatively oriented. They behave defensively, foolishly acting as though their livelihoods are threatened by the projective techniques and ethnographies that will replace surveys, regressions, and multivariate methods. At the 1989 conference of the Association for Consumer Research, they complained fearfully that qualitative researchers might be taking over the conference. They also attack, looking down on the qualitative people, and sneer at them as if they were chiropractors or dentists who could not succeed as physicians. At a recent conference of the American Marketing Association, one participant implied that qualitative researchers are like modern artists who do unrealistic, distorted work because they are not competent at drawing: that is, unlike Picasso who we knew could really draw, they supposedly cannot properly measure and hold their work up to the criteria that govern scientific research. The oddity here is that an ethnography or thick description surely captures a situation more realistically than a particular statistic, no matter how large the sample or whatever the level of confidence.

The final respondent provides a relatively detached summary that implies the big ideas have all been had, but are still guiding specific studies. The major contribution of the '60s were the comprehensive models such as Howard and Sheth. They identified the basic influences and processes involved in CB. I don't think much has been added in terms of scope. Since this time, we have been fleshing out the details…Attitude research of the 70s provided an important understanding of belief-based attitudes, a framework still useful today…Social influence work of the 70s…the human information processing paradigm…early research strictly cognitive…expanded to include emotional responses, low-involvement decision making and judgment, and even non-conscious processes…“revolt” of the late 80s, most notably, the Odyssey project re-introduced the macro perspectives that had been part of the comprehensive models of the 1960s…focusing on the meanings of brands and consumption…included symbolic, ritual, emotional, social, and sensation aspects of consumption…qualitative methods used in sociology and anthropology. The respondents' associations show the sense of change and developments over time. They recognize the richness and variety of the field of consumer research, and they show some sharp individual differences in awareness and evaluation of what has been achieved. Their views reflect the coming and going of qualitative research as it has contended for its place in the sun of the research world. In my view, having been part of this intellectual fray and survived it for over 50 years, I must say it has been enjoyable despite the many anxious moments in trying to cope with dubious clients, skeptical students, rigid reviewers, and supercilious colleagues. I am grateful that our heritage is sometimes funny, even ridiculous, so that we can laugh rather than cry about it. I am grateful to know and to have known so many of the participants—especially the really bright ones—who have collectively created and continue to work on our great common endeavor.