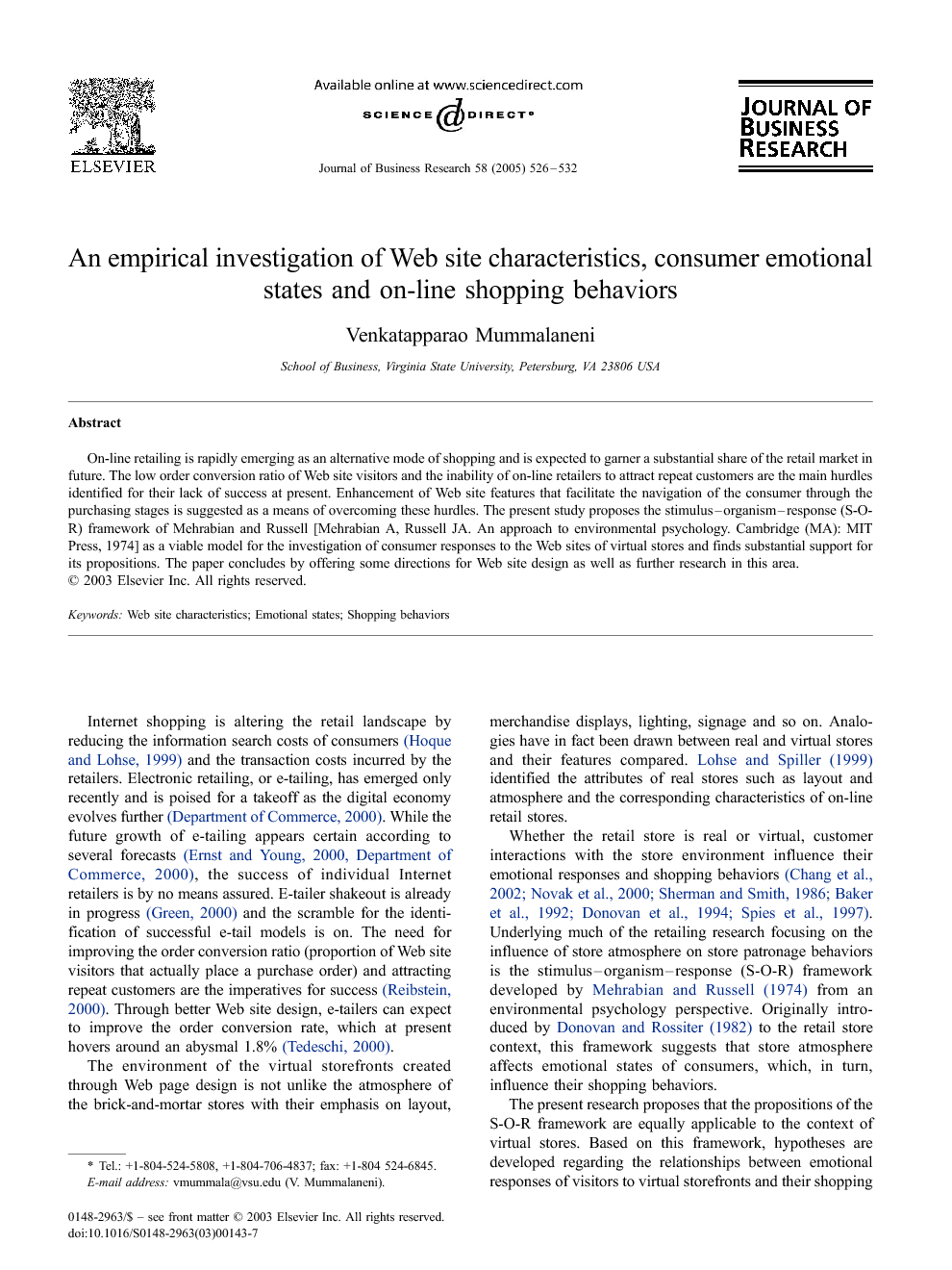 On-line retailing is rapidly emerging as an alternative mode of shopping and is expected to garner a substantial share of the retail market in future. The low order conversion ratio of Web site visitors and the inability of on-line retailers to attract repeat customers are the main hurdles identified for their lack of success at present. Enhancement of Web site features that facilitate the navigation of the consumer through the purchasing stages is suggested as a means of overcoming these hurdles. The present study proposes the stimulus–organism–response (S-O-R) framework of Mehrabian and Russell [Mehrabian A, Russell JA. An approach to environmental psychology. Cambridge (MA): MIT Press, 1974] as a viable model for the investigation of consumer responses to the Web sites of virtual stores and finds substantial support for its propositions. The paper concludes by offering some directions for Web site design as well as further research in this area.

Internet shopping is altering the retail landscape by reducing the information search costs of consumers (Hoque and Lohse, 1999) and the transaction costs incurred by the retailers. Electronic retailing, or e-tailing, has emerged only recently and is poised for a takeoff as the digital economy evolves further (Department of Commerce, 2000). While the future growth of e-tailing appears certain according to several forecasts Ernst and Young, 2000 and Department of Commerce 2000, the success of individual Internet retailers is by no means assured. E-tailer shakeout is already in progress (Green, 2000) and the scramble for the identification of successful e-tail models is on. The need for improving the order conversion ratio (proportion of Web site visitors that actually place a purchase order) and attracting repeat customers are the imperatives for success (Reibstein, 2000). Through better Web site design, e-tailers can expect to improve the order conversion rate, which at present hovers around an abysmal 1.8% (Tedeschi, 2000). The environment of the virtual storefronts created through Web page design is not unlike the atmosphere of the brick-and-mortar stores with their emphasis on layout, merchandise displays, lighting, signage and so on. Analogies have in fact been drawn between real and virtual stores and their features compared. Lohse and Spiller (1999) identified the attributes of real stores such as layout and atmosphere and the corresponding characteristics of on-line retail stores. Whether the retail store is real or virtual, customer interactions with the store environment influence their emotional responses and shopping behaviors Chang et al., 2002, Novak et al., 2000, Sherman and Smith, 1986, Baker et al., 1992, Donovan et al., 1994 and Spies et al., 1997. Underlying much of the retailing research focusing on the influence of store atmosphere on store patronage behaviors is the stimulus–organism–response (S-O-R) framework developed by Mehrabian and Russell (1974) from an environmental psychology perspective. Originally introduced by Donovan and Rossiter (1982) to the retail store context, this framework suggests that store atmosphere affects emotional states of consumers, which, in turn, influence their shopping behaviors. The present research proposes that the propositions of the S-O-R framework are equally applicable to the context of virtual stores. Based on this framework, hypotheses are developed regarding the relationships between emotional responses of visitors to virtual storefronts and their shopping intentions/behaviors. A study is conducted with student subjects and the hypotheses are tested using the data.

Though its origins are recent, on-line retailing is growing rapidly and by all estimates will account for a substantial proportion of retail sales in future. With the exception of a few firms such as E-Bay, on-line retailers are yet to succeed in finding ways of attracting and retaining customers. It is proposed here that Web site design is an important element of the retail strategy that would help e-tailers find success. The results of the present study indicate the usefulness of the S-O-R framework in understanding the relationships among Web site characteristics, emotional responses of shoppers and their purchasing behaviors. The picture that emerges from the results of this study is a complex one. While broadly validating the S-O-R framework, the results are mixed regarding the mediating role of emotional responses on shopping behaviors. However, such results are not uncommon in this stream of research. For instance, the research by Dawson et al. (1990) found only partial support for the mediating role of pleasure and arousal. Further, the amount of variance explained in retail preference and choice by Dawson et al. (1990) is comparable to the R2 values reported here. From a retailer perspective, it is disappointing to find that the time and dollar amount spent at the store Web site are not influenced by ambience or design factors. While ambience had an influence on the number of items purchased, it appears that this influence is mediated by the pleasure variable in the final model. Retailers must direct their efforts to the generation of the pleasure response in order to ensure advantageous marketing outcomes. Stickiness of the Web site (i.e., its ability to keep the consumer at the site) is emerging as a crucial factor in the success of on-line stores. Retailers must simply do a better job of designing their Web sites to hold shopper interest. Time spent at the store Web site is influenced by arousal but not pleasure according to our results. Considering their recent origins, virtual stores presumably present a novel environment to the shopper—especially the first time shopper. Our data show that for a majority of respondents, this is the first encounter with the specific Web storefront. This, combined with the newness of the e-shopping concept, must make the environment a novel one that requires a greater amount of consumer's time to explore. While consumers generally found the store environments pleasant, pleasure does not affect the amount of time devoted to the exploration of the Web site. Novak et al. (2000) concluded from their study of customer experiences in on-line environments that with length of Web usage, enjoyment as well as exploratory behaviors decline. It is possible that among experienced users of Web, the relationship between pleasure and time spent would be stronger than the one observed here. The number of items purchased is affected by pleasure but not arousal. A plausible explanation for these results lies in the utilitarian and hedonic shopping values that consumers bring to a shopping expedition (Babin et al., 1994). Those with utilitarian motives would be pleased to complete their shopping task, whereas those with hedonic motives would be focused on the exploration of the Web site itself, but not the purchasing task. If the Web site is not found to be interesting, the latter are certainly dissatisfied. The dollar amount spent on purchases is not influenced by any of the independent or mediator variables in this study. This result is inconsistent with findings of previous studies (for example, Sherman et al., 1997). A plausible explanation for the absence of the relationship lies in the design of the study and the characteristics of the shoppers. Recall that the participants were students who were told that they are required to visit the store but need not purchase any products if they did not wish to. That is, their shopping expedition was involuntary, but they had a choice in regard to the decision to purchase or not. Budgetary constraints faced by full-time students may also explain why certain purchases were not made. The results are unequivocal in regard to the influence of pleasure and arousal on consumer satisfaction with the shopping trip. Both variables exhibit statistically significant and strong effects on satisfaction. They are also perfect mediators of the Web site characteristics—satisfaction relationship. Since satisfaction is widely regarded as an affective response, it is not surprising that the two emotional responses are strongly associated with it. As Yoo et al. (1998) have suggested previously, the need for “managing” the emotional state of the on-line shoppers through better Web site design cannot be overemphasized. Any improvements in this area are likely to yield rich dividends in terms of shopper conversion ratios and enhanced store loyalty.