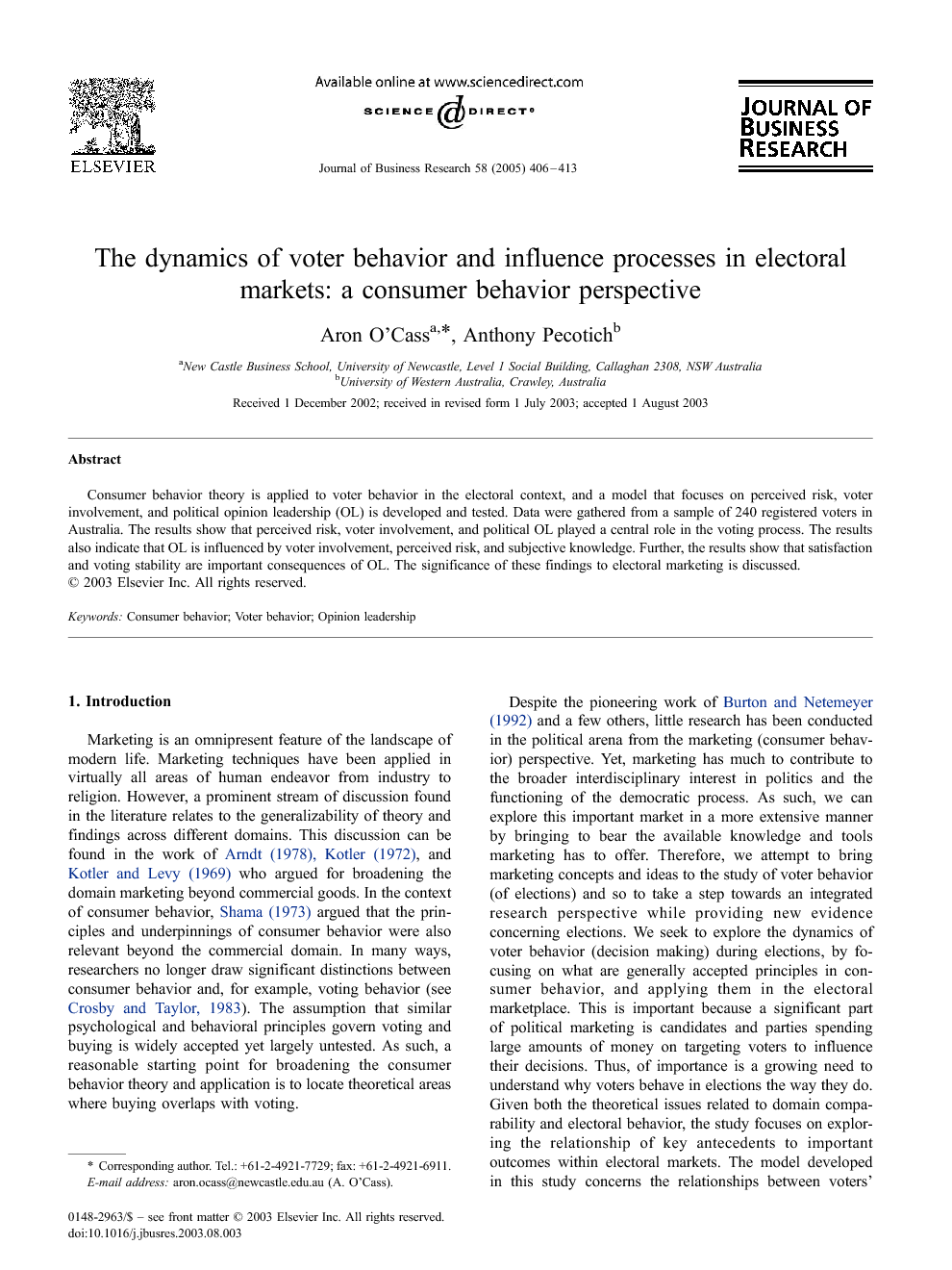 Marketing is an omnipresent feature of the landscape of modern life. Marketing techniques have been applied in virtually all areas of human endeavor from industry to religion. However, a prominent stream of discussion found in the literature relates to the generalizability of theory and findings across different domains. This discussion can be found in the work of Arndt, 1978 and Kotler, 1972, and Kotler and Levy (1969) who argued for broadening the domain marketing beyond commercial goods. In the context of consumer behavior, Shama (1973) argued that the principles and underpinnings of consumer behavior were also relevant beyond the commercial domain. In many ways, researchers no longer draw significant distinctions between consumer behavior and, for example, voting behavior (see Crosby and Taylor, 1983). The assumption that similar psychological and behavioral principles govern voting and buying is widely accepted yet largely untested. As such, a reasonable starting point for broadening the consumer behavior theory and application is to locate theoretical areas where buying overlaps with voting. Despite the pioneering work of Burton and Netemeyer (1992) and a few others, little research has been conducted in the political arena from the marketing (consumer behavior) perspective. Yet, marketing has much to contribute to the broader interdisciplinary interest in politics and the functioning of the democratic process. As such, we can explore this important market in a more extensive manner by bringing to bear the available knowledge and tools marketing has to offer. Therefore, we attempt to bring marketing concepts and ideas to the study of voter behavior (of elections) and so to take a step towards an integrated research perspective while providing new evidence concerning elections. We seek to explore the dynamics of voter behavior (decision making) during elections, by focusing on what are generally accepted principles in consumer behavior, and applying them in the electoral marketplace. This is important because a significant part of political marketing is candidates and parties spending large amounts of money on targeting voters to influence their decisions. Thus, of importance is a growing need to understand why voters behave in elections the way they do. Given both the theoretical issues related to domain comparability and electoral behavior, the study focuses on exploring the relationship of key antecedents to important outcomes within electoral markets. The model developed in this study concerns the relationships between voters' perceived risk in the context of electoral outcomes, their level of involvement, opinion leadership (OL), information search, knowledge and decision confidence, satisfaction with politics, and stability of voting behavior.

This study contributes to furthering our specific understanding of voter and consumer behavior in general. The general theoretical thrust was supported and it appears that OL may play an important role in voter decision making. If the results are generalizable to other populations and electoral contexts, the results will have important implications for political marketers, parties, public policy advocates, and academics. Ultimately, the variables examined here impact on voters' ultimate choices of candidates and parties in an election. The strategies that are developed and implemented in a campaign by a party would be seen to differ significantly according to the extent of OL. Also of importance is the finding that involvement and subjective knowledge influences OL (and its consequences), which subsequently affect the level of stability in choices and their (voters) ultimate satisfaction with their decision-making capacity. As such, one would see different types of information being targeted at voters with high versus low involvement. This is because low involvement is related to lower knowledge and less confidence and less information seeking, whereas high involvement is related to greater OL tendencies and greater knowledge and more confidence and also greater satisfaction. One may see such strategies used in targeting the high-involvement voter, as they would be more amenable to information campaigns during elections. However, the outcome of targeting specific groups of voters has always been a heated public policy issue. Despite immense technological and scientific progress, we exist in a period of great turbulence and uncertainty. To summarize Klugman (1999), since the beginning of the 1980s, we have faced many more political and natural disasters than ever before. Given this situation, humanity everywhere is beset by helplessness and despair and the apparent universal loss of faith in the ability of institutions and political processes to improve their condition. Evidently, there is no other hope for the future but through open and democratic political processes (Pecotich and Shultz, 1998). Furthermore, one hopes that this study will not only contribute to progress in consumer behavior research, but will also encourage other researchers to direct their attention to this important global issue, that of democratic processes that are inherent in the study of political marketing. Clearly, there is a need to apply what we know of the commercial marketplace in the electoral marketplace. By bringing to bear on the electoral marketplace the accumulated knowledge and tools of consumer behavior, we are certain much progress can be made. The relevance of this study is not only about the specific findings and data, but also that, after many decades of borrowing theories and models from other disciplines to apply to consumer behavior issues and contexts, we may well have reached a point where our models are robust enough that they can be applied to problems other than buying clothes, cars, and other often stereotyped as crass commercial endeavors. If these findings are generalizable, we may well turn our attention from products to more substantive problems of society such as voting in which consumers are asked to make choices between alternatives that have substantial impacts on society at large.