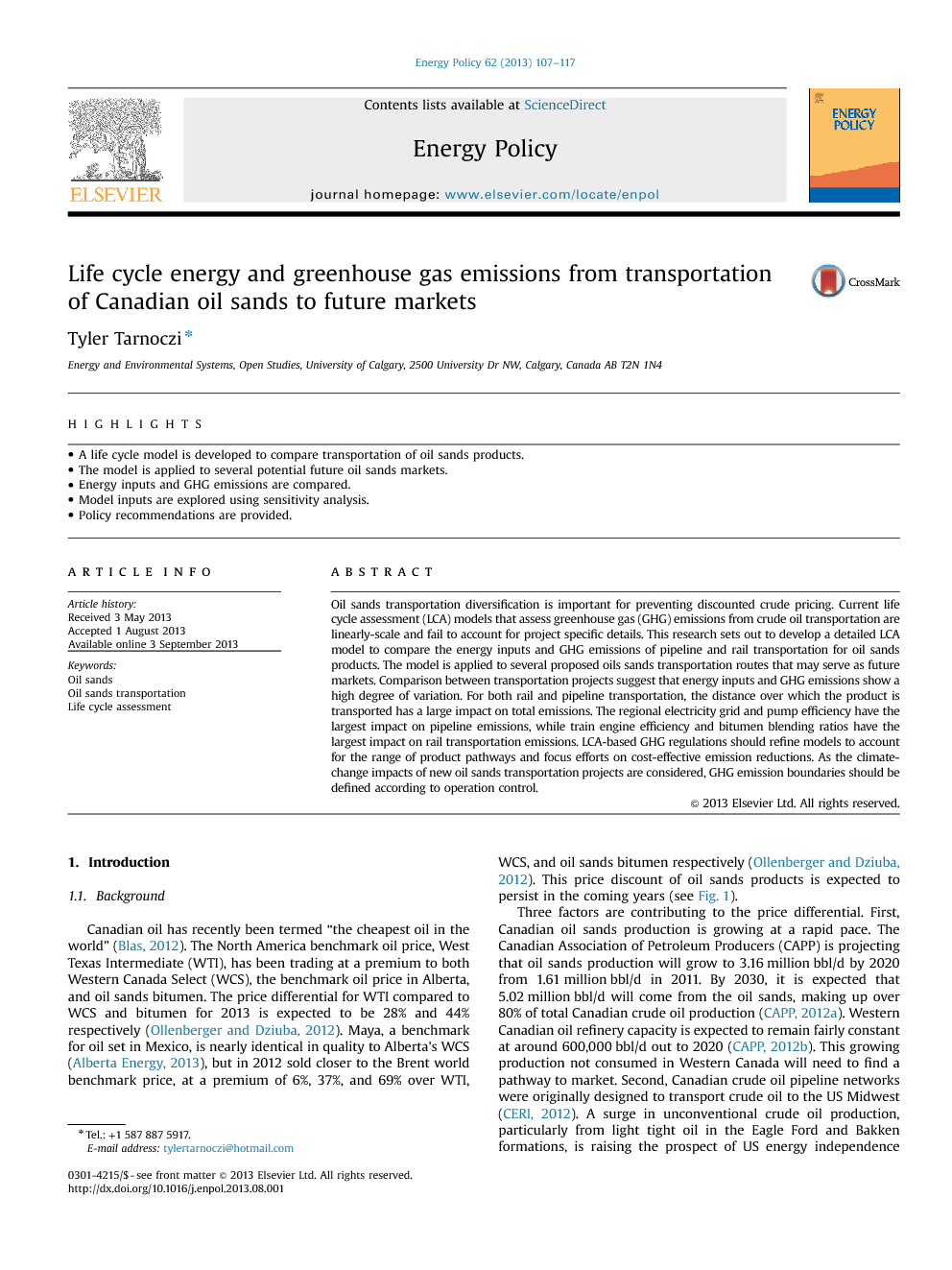 Oil sands transportation diversification is important for preventing discounted crude pricing. Current life cycle assessment (LCA) models that assess greenhouse gas (GHG) emissions from crude oil transportation are linearly-scale and fail to account for project specific details. This research sets out to develop a detailed LCA model to compare the energy inputs and GHG emissions of pipeline and rail transportation for oil sands products. The model is applied to several proposed oils sands transportation routes that may serve as future markets. Comparison between transportation projects suggest that energy inputs and GHG emissions show a high degree of variation. For both rail and pipeline transportation, the distance over which the product is transported has a large impact on total emissions. The regional electricity grid and pump efficiency have the largest impact on pipeline emissions, while train engine efficiency and bitumen blending ratios have the largest impact on rail transportation emissions. LCA-based GHG regulations should refine models to account for the range of product pathways and focus efforts on cost-effective emission reductions. As the climate-change impacts of new oil sands transportation projects are considered, GHG emission boundaries should be defined according to operation control.

Canadian oil has recently been termed “the cheapest oil in the world” (Blas, 2012). The North America benchmark oil price, West Texas Intermediate (WTI), has been trading at a premium to both Western Canada Select (WCS), the benchmark oil price in Alberta, and oil sands bitumen. The price differential for WTI compared to WCS and bitumen for 2013 is expected to be 28% and 44% respectively (Ollenberger and Dziuba, 2012). Maya, a benchmark for oil set in Mexico, is nearly identical in quality to Alberta's WCS (Alberta Energy, 2013), but in 2012 sold closer to the Brent world benchmark price, at a premium of 6%, 37%, and 69% over WTI, WCS, and oil sands bitumen respectively (Ollenberger and Dziuba, 2012). This price discount of oil sands products is expected to persist in the coming years (see Fig. 1). Oil sands products (Bitumen and Western Canada Select) have been trading at a steep discount to other oil benchmarks. This price discount is expected to continue in the near- to mid-term given the rapid expansion of Canada's oil sands, increased production light, tight oil in the US Midwest, and limited export capacity. Three factors are contributing to the price differential. First, Canadian oil sands production is growing at a rapid pace. The Canadian Association of Petroleum Producers (CAPP) is projecting that oil sands production will grow to 3.16 million bbl/d by 2020 from 1.61 million bbl/d in 2011. By 2030, it is expected that 5.02 million bbl/d will come from the oil sands, making up over 80% of total Canadian crude oil production (CAPP, 2012a). Western Canadian oil refinery capacity is expected to remain fairly constant at around 600,000 bbl/d out to 2020 (CAPP, 2012b). This growing production not consumed in Western Canada will need to find a pathway to market. Second, Canadian crude oil pipeline networks were originally designed to transport crude oil to the US Midwest (CERI, 2012). A surge in unconventional crude oil production, particularly from light tight oil in the Eagle Ford and Bakken formations, is raising the prospect of US energy independence (EIA, 2013) while at the same time squeezing pipeline capacity for oil sands producers looking to move their product to the US (IEA, 2013). While oil sands crude has limited pipeline connections beyond the US Midwest (PADD II) market, oil from Mexico fetches a higher price given its direct access to the US Gulf coast (PADD III) and other international markets (Argus Media, 2012). Third, despite the need for additional pipeline capacity to export oil sands out of the region, regulatory approvals for new pipelines have been delayed by environmental groups and First Nations' that oppose the projects (Parliament of Canada, 2012). The Canadian Energy Research Institute (CERI) estimates that failure to expand Canada's pipeline export capacity could constrain future oil production resulting in up to a $1.35 trillion loss in GDP and $225 billion in tax revenues from 2011 to 2035 (CERI, 2010). In March 2013, the Alberta government cited lower than expected oil revenue as the driver for a $6.2 billion dollar budget deficit (CBC, 2013). Alberta's energy minister, Ken Hughes, highlighted the need to connect Alberta to international markets: “It is a strategic imperative, it is in Alberta's interest, in Canada's interest, that we get access to tidewater, whether that's east, north or west, to diversify away from the single continental market and be part of the global market” (Van Loon, 2013). Several pipeline options are being considered to expand the oil sands transportation network and increase market access (IHS CERA, 2013a). Crude export by rail is also expected to play an increasingly important role in oils sands export (CERI, 2012). In early 2011, virtually no western Canadian crude was exported by rail. By the end of 2013, crude oil being transported out of Western Canada by rail will increase to 200,000 bbl/d (Peters & Co., 2013). With various proposed rail and pipeline export routes for oil sands products being considered, it is important to understand the implications of crude transportation using a life cycle analysis (LCA) approach. This study seeks to quantify the comparative energy inputs and greenhouse gas (GHG) emissions of the proposed routes. This study is particularly timely given the numerous transportation projects being considered and the contentious debate over their environmental impacts. The results of this analysis are relevant to industry, policymakers, regulators, and environmental non-governmental organizations.