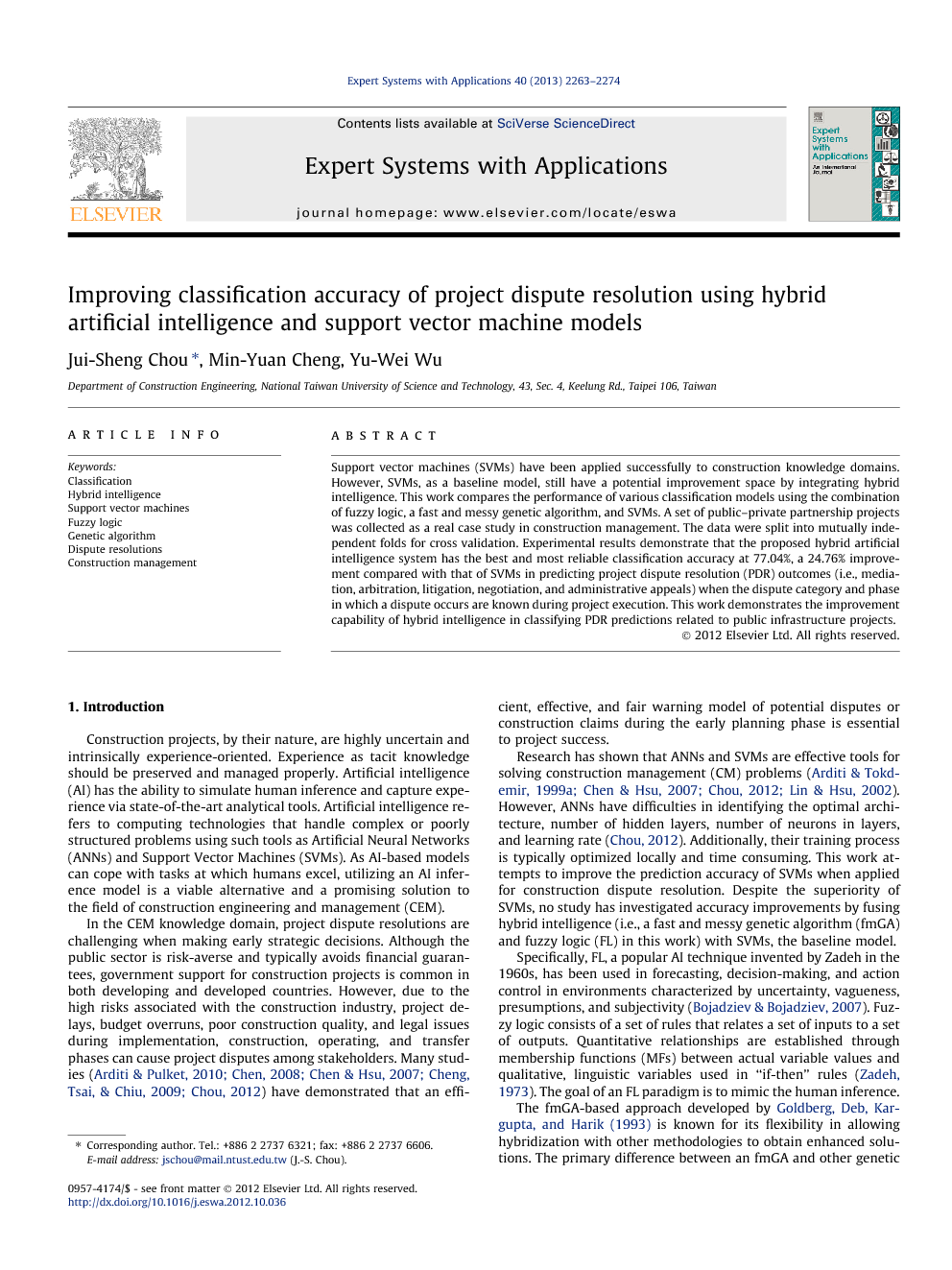 Support vector machines (SVMs) have been applied successfully to construction knowledge domains. However, SVMs, as a baseline model, still have a potential improvement space by integrating hybrid intelligence. This work compares the performance of various classification models using the combination of fuzzy logic, a fast and messy genetic algorithm, and SVMs. A set of public–private partnership projects was collected as a real case study in construction management. The data were split into mutually independent folds for cross validation. Experimental results demonstrate that the proposed hybrid artificial intelligence system has the best and most reliable classification accuracy at 77.04%, a 24.76% improvement compared with that of SVMs in predicting project dispute resolution (PDR) outcomes (i.e., mediation, arbitration, litigation, negotiation, and administrative appeals) when the dispute category and phase in which a dispute occurs are known during project execution. This work demonstrates the improvement capability of hybrid intelligence in classifying PDR predictions related to public infrastructure projects.

Construction projects, by their nature, are highly uncertain and intrinsically experience-oriented. Experience as tacit knowledge should be preserved and managed properly. Artificial intelligence (AI) has the ability to simulate human inference and capture experience via state-of-the-art analytical tools. Artificial intelligence refers to computing technologies that handle complex or poorly structured problems using such tools as Artificial Neural Networks (ANNs) and Support Vector Machines (SVMs). As AI-based models can cope with tasks at which humans excel, utilizing an AI inference model is a viable alternative and a promising solution to the field of construction engineering and management (CEM). In the CEM knowledge domain, project dispute resolutions are challenging when making early strategic decisions. Although the public sector is risk-averse and typically avoids financial guarantees, government support for construction projects is common in both developing and developed countries. However, due to the high risks associated with the construction industry, project delays, budget overruns, poor construction quality, and legal issues during implementation, construction, operating, and transfer phases can cause project disputes among stakeholders. Many studies (Arditi and Pulket, 2010, Chen, 2008, Chen and Hsu, 2007, Cheng et al., 2009 and Chou, 2012) have demonstrated that an efficient, effective, and fair warning model of potential disputes or construction claims during the early planning phase is essential to project success. Research has shown that ANNs and SVMs are effective tools for solving construction management (CM) problems (Arditi and Tokdemir, 1999a, Chen and Hsu, 2007, Chou, 2012 and Lin, 2002). However, ANNs have difficulties in identifying the optimal architecture, number of hidden layers, number of neurons in layers, and learning rate (Chou, 2012). Additionally, their training process is typically optimized locally and time consuming. This work attempts to improve the prediction accuracy of SVMs when applied for construction dispute resolution. Despite the superiority of SVMs, no study has investigated accuracy improvements by fusing hybrid intelligence (i.e., a fast and messy genetic algorithm (fmGA) and fuzzy logic (FL) in this work) with SVMs, the baseline model. Specifically, FL, a popular AI technique invented by Zadeh in the 1960s, has been used in forecasting, decision-making, and action control in environments characterized by uncertainty, vagueness, presumptions, and subjectivity (Bojadziev & Bojadziev, 2007). Fuzzy logic consists of a set of rules that relates a set of inputs to a set of outputs. Quantitative relationships are established through membership functions (MFs) between actual variable values and qualitative, linguistic variables used in “if-then” rules (Zadeh, 1973). The goal of an FL paradigm is to mimic the human inference. The fmGA-based approach developed by Goldberg, Deb, Kargupta, and Harik (1993) is known for its flexibility in allowing hybridization with other methodologies to obtain enhanced solutions. The primary difference between an fmGA and other genetic approaches is its ability to manipulate explicitly building blocks of genetic material to obtain good solutions and potentially the global optimum. Thus, to demonstrate the efficacy of combining the above AI-based techniques, this work compares classification performance to predict project dispute resolutions using SVMs as a benchmark, along with the performance of the SVMs + fmGA model, and SVMs + fmGA + FL model. The remainder of this paper is organized as follows. Section 2 thoroughly reviews AI literature and the application of AI to predict construction claims and litigation outcomes. Section 3 then characterizes the research methodology, providing a theoretical basis for classification models adopted in subsequent investigations. Section 4 describes the project dispute database and compares model performance based on classification techniques. Conclusions are given in Section 5, along with directions for future research.

This work assesses the efficacy of hybrid AI techniques in classifying project dispute resolutions. Specifically, one AI technique integrated with SVMs had sufficient training accuracy compared with that of two AI techniques with SVMs. This work demonstrates that an appropriate combination of AI can improve classification testing performance significantly, even though the hybrid system may more difficult and time consuming than other systems. In terms of the cross-fold accuracy with test data, the best hybrid system was generated by combining an fmGA, FL, and SVMs. Fuzzy logic was used to address vagueness and approximate reasoning; SVMs were applied to map fuzzy input–output functions; and the fmGA was utilized as an optimization tool to handle FL and SVMs search parameters. The experimental models were examined using a real CM domain problem. With known project attributes of disputed cases, the hybrid models exhibited their superiority, stability, efficiency, and ability to avoid overfitting with better accuracy than the single flat SVMs model. A 12.08% improvement was achieved with one additional AI technique combined with SVMs, while the improvement was 24.76% with two AI techniques. In terms of practical application, the advantages of an early warning system for dispute resolutions include reducing the time and effort needed to prepare a rule set to prevent potential disputes by enhancing project understanding among parties. Future work can investigate the improvement achieved by testing other real prediction or classification problems in CM using the proposed hybrid system.