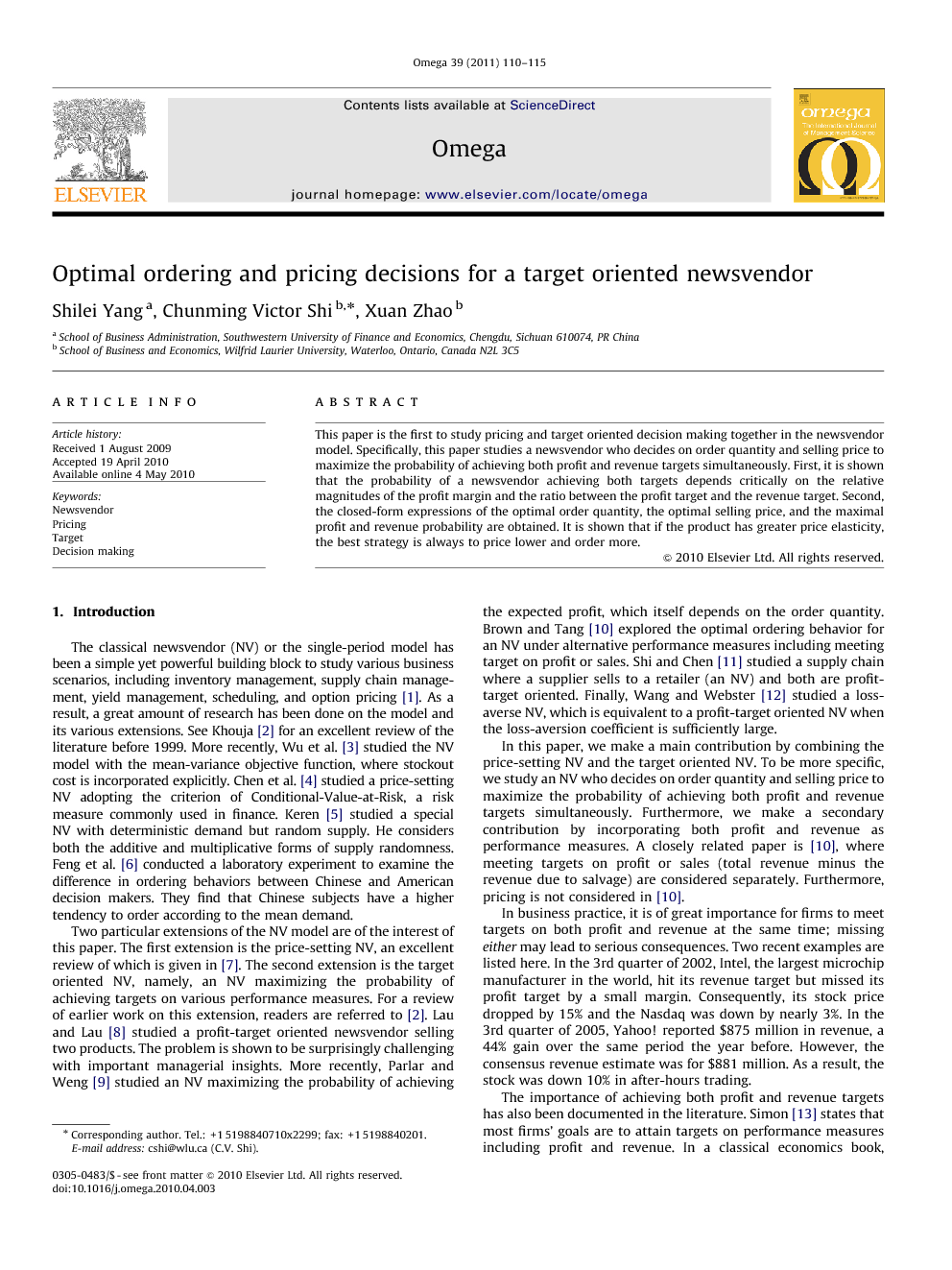 This paper is the first to study pricing and target oriented decision making together in the newsvendor model. Specifically, this paper studies a newsvendor who decides on order quantity and selling price to maximize the probability of achieving both profit and revenue targets simultaneously. First, it is shown that the probability of a newsvendor achieving both targets depends critically on the relative magnitudes of the profit margin and the ratio between the profit target and the revenue target. Second, the closed-form expressions of the optimal order quantity, the optimal selling price, and the maximal profit and revenue probability are obtained. It is shown that if the product has greater price elasticity, the best strategy is always to price lower and order more.

The classical newsvendor (NV) or the single-period model has been a simple yet powerful building block to study various business scenarios, including inventory management, supply chain management, yield management, scheduling, and option pricing [1]. As a result, a great amount of research has been done on the model and its various extensions. See Khouja [2] for an excellent review of the literature before 1999. More recently, Wu et al. [3] studied the NV model with the mean-variance objective function, where stockout cost is incorporated explicitly. Chen et al. [4] studied a price-setting NV adopting the criterion of Conditional-Value-at-Risk, a risk measure commonly used in finance. Keren [5] studied a special NV with deterministic demand but random supply. He considers both the additive and multiplicative forms of supply randomness. Feng et al. [6] conducted a laboratory experiment to examine the difference in ordering behaviors between Chinese and American decision makers. They find that Chinese subjects have a higher tendency to order according to the mean demand. Two particular extensions of the NV model are of the interest of this paper. The first extension is the price-setting NV, an excellent review of which is given in [7]. The second extension is the target oriented NV, namely, an NV maximizing the probability of achieving targets on various performance measures. For a review of earlier work on this extension, readers are referred to [2]. Lau and Lau [8] studied a profit-target oriented newsvendor selling two products. The problem is shown to be surprisingly challenging with important managerial insights. More recently, Parlar and Weng [9] studied an NV maximizing the probability of achieving the expected profit, which itself depends on the order quantity. Brown and Tang [10] explored the optimal ordering behavior for an NV under alternative performance measures including meeting target on profit or sales. Shi and Chen [11] studied a supply chain where a supplier sells to a retailer (an NV) and both are profit-target oriented. Finally, Wang and Webster [12] studied a loss-averse NV, which is equivalent to a profit-target oriented NV when the loss-aversion coefficient is sufficiently large. In this paper, we make a main contribution by combining the price-setting NV and the target oriented NV. To be more specific, we study an NV who decides on order quantity and selling price to maximize the probability of achieving both profit and revenue targets simultaneously. Furthermore, we make a secondary contribution by incorporating both profit and revenue as performance measures. A closely related paper is [10], where meeting targets on profit or sales (total revenue minus the revenue due to salvage) are considered separately. Furthermore, pricing is not considered in [10]. In business practice, it is of great importance for firms to meet targets on both profit and revenue at the same time; missing either may lead to serious consequences. Two recent examples are listed here. In the 3rd quarter of 2002, Intel, the largest microchip manufacturer in the world, hit its revenue target but missed its profit target by a small margin. Consequently, its stock price dropped by 15% and the Nasdaq was down by nearly 3%. In the 3rd quarter of 2005, Yahoo! reported $875 million in revenue, a 44% gain over the same period the year before. However, the consensus revenue estimate was for $881 million. As a result, the stock was down 10% in after-hours trading. The importance of achieving both profit and revenue targets has also been documented in the literature. Simon [13] states that most firms’ goals are to attain targets on performance measures including profit and revenue. In a classical economics book, Baumol [14] advocates that the objective of firms is revenue maximization subject to profit-target constraint. Shipley [15] studied the pricing objectives of 728 British manufacturing firms. It is found out that 87.8% of the firms specify a profit target or a target rate of return on capital and 47.0% of the firms specify a revenue target. More recently, Brown and Tang [10] surveyed professional buyers (NVs) whose jobs are to order fashion items for companies such as Sears and J.C. Penny. They find that the buyers’ important performance metrics include meeting targets on profit or sales. The remainder of this paper is organized as follows: in Section 2, we first present the results on a profit-target oriented NV and then study a revenue-target oriented NV. Then in Section 3, we study an NV with both profit and revenue targets to achieve. In Section 4, we study a price-setting NV with both profit and revenue targets. We summarize our results and suggest future research in Section 5.

There have been two major extensions to the classical NV model. One is to allow an NV to determine the selling price. Another is to consider target oriented decision making in the NV model. In this paper, we make an important contribution by combining the price-setting NV and the target oriented NV. Furthermore, unlike most of the existing studies, this paper incorporates both profit and revenue as performance measures. Our major findings are as follows: first, the capability for an NV to achieve both profit and revenue targets simultaneously depends critically on the product's profit margin and the ratio between the profit and revenue targets. When the revenue target is low enough so that the target ratio is larger than the profit margin, the revenue target becomes irrelevant. When the revenue target is high enough so that the target ratio is smaller than the profit margin, both targets need to be taken into account. Second, the closed-form expressions of the optimal order quantity, the optimal selling price, and the maximal profit and revenue probability are derived. It is shown that for an NV selling a product with a greater price elasticity, to maximize the probability of achieving both profit and revenue targets simultaneously, the best strategy is always to price lower and to stock more. There are several potential future research directions. One is to study other performance measures such as service level, return on sales and return on investment (ROI). However, caution has to be taken when incorporating a relative performance measure. For example, ROI is one of the most important performance metrics in practice. In the stylized NV model, ROI can be calculated as profit over total ordering cost. It can be shown that the expected ROI is always maximized at the minimum possible demand (see Appendix for a proof). Therefore, the implication is that relative performance measures such as ROI may not work well with the stylized NV model. The second future direction can be considering more realistic scenarios where, say, multiple periods and/or market competition are involved. Last but not least, this paper assumes that profit and revenue targets are exogenously and properly set. Thus the third direction is to study the setting of targets on various performance measures.