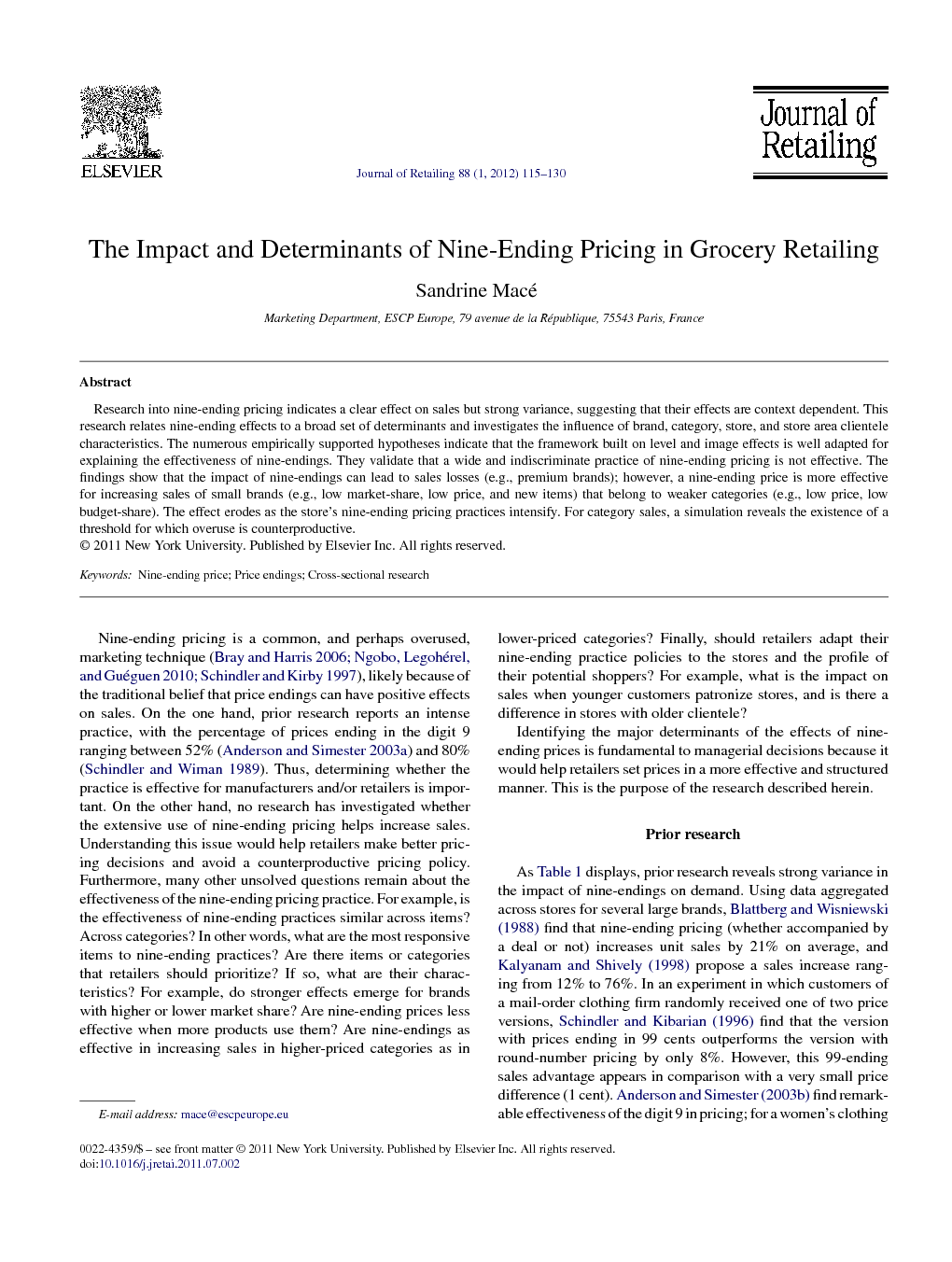 Research into nine-ending pricing indicates a clear effect on sales but strong variance, suggesting that their effects are context dependent. This research relates nine-ending effects to a broad set of determinants and investigates the influence of brand, category, store, and store area clientele characteristics. The numerous empirically supported hypotheses indicate that the framework built on level and image effects is well adapted for explaining the effectiveness of nine-endings. They validate that a wide and indiscriminate practice of nine-ending pricing is not effective. The findings show that the impact of nine-endings can lead to sales losses (e.g., premium brands); however, a nine-ending price is more effective for increasing sales of small brands (e.g., low market-share, low price, and new items) that belong to weaker categories (e.g., low price, low budget-share). The effect erodes as the store's nine-ending pricing practices intensify. For category sales, a simulation reveals the existence of a threshold for which overuse is counterproductive.

Nine-ending pricing is a common, and perhaps overused, marketing technique (Bray and Harris, 2006, Ngobo et al., 2010 and Schindler and Kirby, 1997), likely because of the traditional belief that price endings can have positive effects on sales. On the one hand, prior research reports an intense practice, with the percentage of prices ending in the digit 9 ranging between 52% (Anderson and Simester 2003a) and 80% (Schindler and Wiman 1989). Thus, determining whether the practice is effective for manufacturers and/or retailers is important. On the other hand, no research has investigated whether the extensive use of nine-ending pricing helps increase sales. Understanding this issue would help retailers make better pricing decisions and avoid a counterproductive pricing policy. Furthermore, many other unsolved questions remain about the effectiveness of the nine-ending pricing practice. For example, is the effectiveness of nine-ending practices similar across items? Across categories? In other words, what are the most responsive items to nine-ending practices? Are there items or categories that retailers should prioritize? If so, what are their characteristics? For example, do stronger effects emerge for brands with higher or lower market share? Are nine-ending prices less effective when more products use them? Are nine-endings as effective in increasing sales in higher-priced categories as in lower-priced categories? Finally, should retailers adapt their nine-ending practice policies to the stores and the profile of their potential shoppers? For example, what is the impact on sales when younger customers patronize stores, and is there a difference in stores with older clientele? Identifying the major determinants of the effects of nine-ending prices is fundamental to managerial decisions because it would help retailers set prices in a more effective and structured manner. This is the purpose of the research described herein.