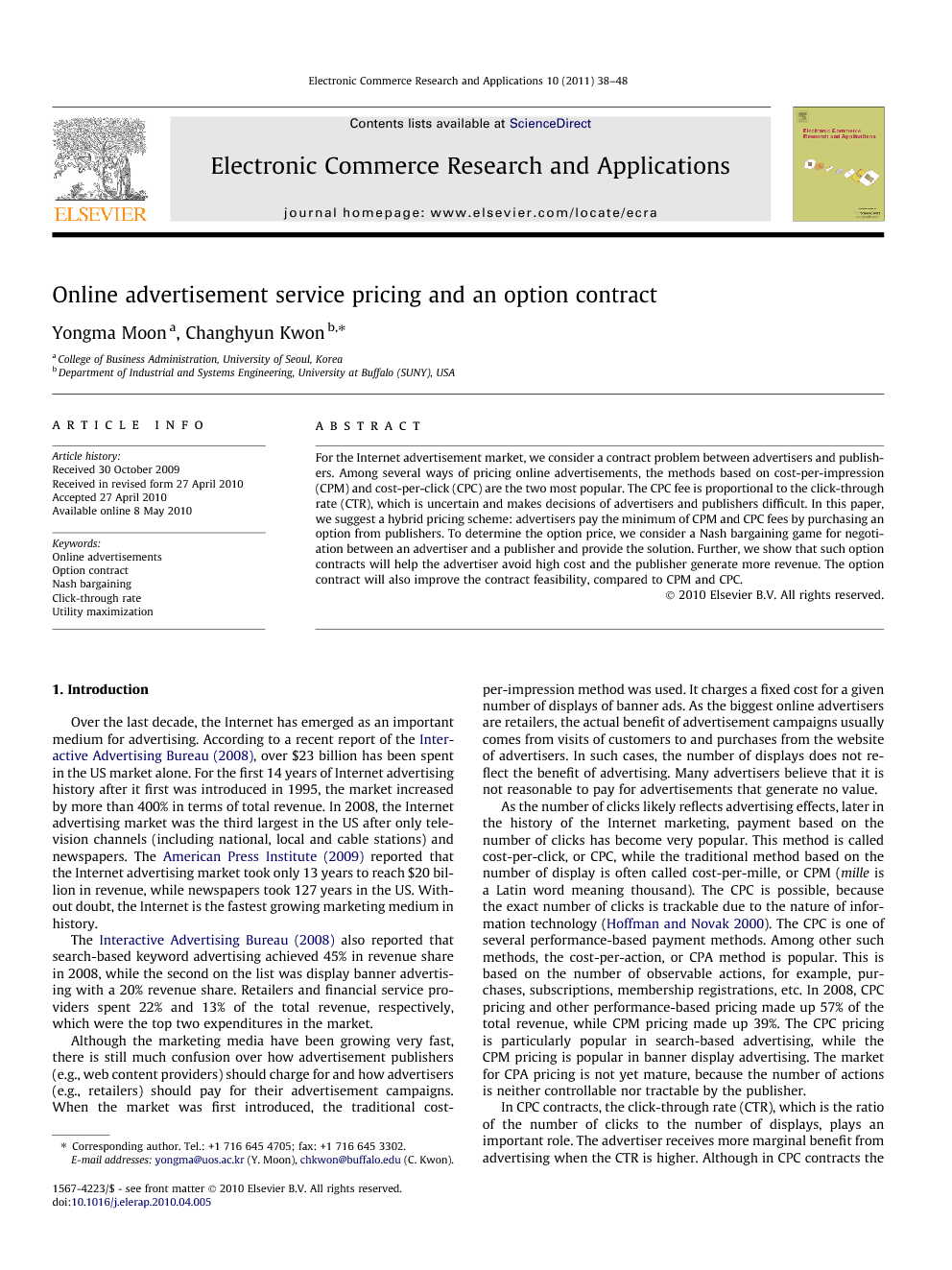 For the Internet advertisement market, we consider a contract problem between advertisers and publishers. Among several ways of pricing online advertisements, the methods based on cost-per-impression (CPM) and cost-per-click (CPC) are the two most popular. The CPC fee is proportional to the click-through rate (CTR), which is uncertain and makes decisions of advertisers and publishers difficult. In this paper, we suggest a hybrid pricing scheme: advertisers pay the minimum of CPM and CPC fees by purchasing an option from publishers. To determine the option price, we consider a Nash bargaining game for negotiation between an advertiser and a publisher and provide the solution. Further, we show that such option contracts will help the advertiser avoid high cost and the publisher generate more revenue. The option contract will also improve the contract feasibility, compared to CPM and CPC.

In this paper, we proposed a new type of option contract for online advertising, and evaluated its properties. In Internet advertising, the cost-per-impression (CPM) and the cost-per-click (CPC) are widely used as the basis for contracting. However, because of uncertainty in click-through rates (CTR), one contract may cost more than the other to an advertiser or bring more revenue to a publisher and vice versa. For this reason, the selection of contract can be a crucial decision making issue to both publishers and advertisers. In this context, publishers and advertisers are willing to hedge the uncertainty of future advertising cost, as a means to achieve higher revenue. Thus, this research suggests an option to pay the minimum of CPM and CPC fees as a way to avoid the ambiguity of the contract type choice. The advertiser can avoid future high costs by purchasing the option in advance, while the publisher can generate additional revenue by selling the option. We derived an appropriate pricing rule for such options by solving for a game-theoretic equilibrium involving two players. From the proposed model, we have shown that the option contract is beneficial in the aspects of (i) contract feasibility, (ii) publisher’s utility and (iii) advertiser’s regret. First, our result shows that the option contract will increase the chance of a contract between the advertiser and publisher being made, because an option contract can be agreed to even for a relatively lower CTR. Also, this result shows that a publisher can have more potential demand (advertisers) using the option contract, when we consider the whole market. When CTR is predicted to be very low for an advertiser’s campaign, the advertiser prefers CPC, while the publisher prefers CPM. Therefore, sometimes no agreement is possible only with CPM and CPC. However, an option contract can be used as a good tool to mitigate the conflicting interests of both parties, because it has a lower threshold of CTR. Consequently, the publisher can contract with more advertisers even for a low CTR. Second, another result showed that a publisher can make the most profits by introducing an option contract, when the difference between the expected and realized CTRs is small. This can be a great advantage to the publisher, but also suggests that the publisher should try to accurately estimate the CTR. Finally, we showed that the advertiser can expect a stable level of regret regardless of CTR. As we know, CPM and CPC might lead to losses in some cases such as too low CTR and the existence of click-fraud. In this environment, contract selection could be a source of regret. However, an advertiser who chooses an option contract does not have to worry about this environmental issue or extreme scenarios. In practice, option contracts can be used in a number of different ways. An advertiser can avoid confusion in online advertising contract selection (risk-hedging). Although display advertisements are usually contracted based on CPM in current practice as they have been in traditional media, there are many debates about how online advertisement contracts should be made. The main source of this confusion is CTR. Should an advertisement campaign receive many clicks, the advertiser will prefer to pay based on CPM. On the other hand, when an advertisement campaign receives a small number of clicks, the advertiser will prefer to pay based on CPC. However, the publisher will have exactly the opposite preferences. Using the option contract we proposed in this paper, we can eliminate a source of confusion to a certain degree. Moreover, using an option contract offers a good opportunity to a publisher who hopes to make more profit. More importantly, online advertisement is basically beneficial to both parties, because both can earn profits from advertisement. But, due to their conflicting interests, they could lose this opportunity. However, our proposed option contract can play a role in mitigating the conflict and support the simultaneous interests of an advertiser and a publisher who are worried about inappropriate contract selection and profitability. This research has a number of limitations, since we did not consider some contract factors to keep our analysis relatively simple. To make the model more realistic, we could consider, for example, duration of contract, advertising format (still image, digital video and rich media), and so on. More importantly, we could consider how a banner is displayed. It can be displayed as fixed in a page for a day or a week, or can be displayed with other banners mixed for a longer period. In the former case, for a day or a week, it will receive more attention, but predicting CTR will be harder. This research also can be extended to consider each player’s risk attitude. Some players are more afraid of uncertainty than others. This attitude will increase or decrease the option value. Another extension is to address the possibility of asymmetric information. Usually, a publisher may have more information than an advertiser for the number of incoming customers. This can result in advantage for the publisher and in this situation the option price will change also. Thus, addressing the potential for a moral hazard problem will be an interesting topic to analyze further using a principal agent model and a game-theoretic approach. Although our focus has been on the direct negotiation between an advertiser and a publisher, we may extend our approach to consider a negotiation between advertisers and the network agency that connects advertisers with multiple publishers. In practice, many publishers maintain two contracting channels: one for direct negotiation with advertisers as studied in this paper, and the other with agencies. To apply our approach to the second case, we need to resolve the issue of measuring click-through rates, because an advertisement through agencies is often displayed by multiple numbers of web sites. A simple way to do this is to use the distribution of the average click-through rates of the many web sites.