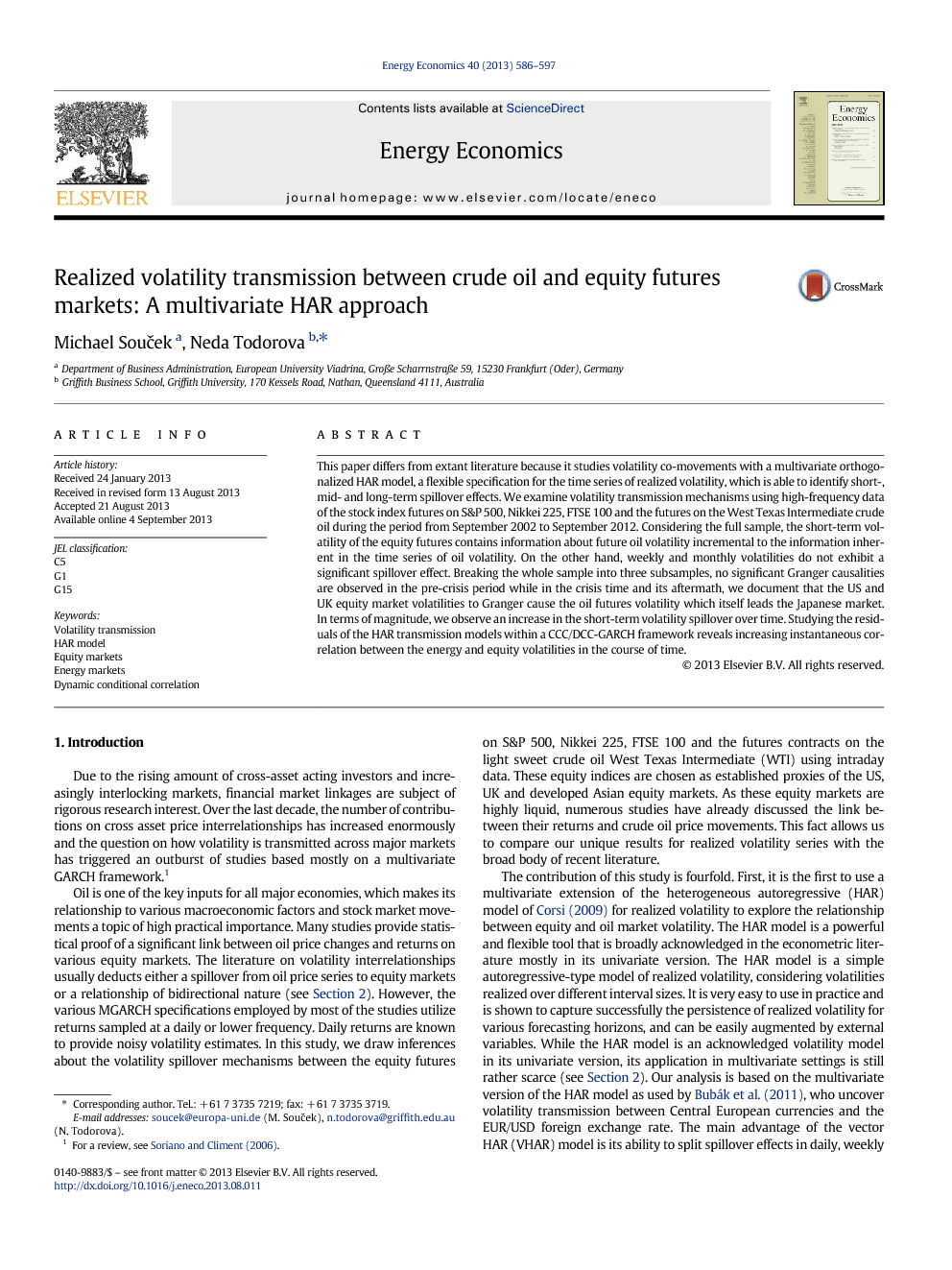 This paper differs from extant literature because it studies volatility co-movements with a multivariate orthogonalized HAR model, a flexible specification for the time series of realized volatility, which is able to identify short-, mid- and long-term spillover effects. We examine volatility transmission mechanisms using high-frequency data of the stock index futures on S&P 500, Nikkei 225, FTSE 100 and the futures on the West Texas Intermediate crude oil during the period from September 2002 to September 2012. Considering the full sample, the short-term volatility of the equity futures contains information about future oil volatility incremental to the information inherent in the time series of oil volatility. On the other hand, weekly and monthly volatilities do not exhibit a significant spillover effect. Breaking the whole sample into three subsamples, no significant Granger causalities are observed in the pre-crisis period while in the crisis time and its aftermath, we document that the US and UK equity market volatilities to Granger cause the oil futures volatility which itself leads the Japanese market. In terms of magnitude, we observe an increase in the short-term volatility spillover over time. Studying the residuals of the HAR transmission models within a CCC/DCC-GARCH framework reveals increasing instantaneous correlation between the energy and equity volatilities in the course of time.

This paper analyzes volatility transmission patterns between oil and equity futures markets using a unique multivariate extension of HAR model by Corsi (2009). The main advantage of the vector HAR (VHAR) model is its ability to split spillover effects in daily, weekly and monthly horizons,which cannot be done bymeans of thewidely establishedmultivariate GARCH framework. Our methodological contribution to Bubák et al. (2011) who first use a similar specification is to utilize the asset's own lagged volatility components and lagged orthogonalized volatility components of the second asset in bivariate vector HAR models. Assigning spillovers to short-, mid- and long-term volatility effects contributes to a more profound understanding of the origin and nature of the observed volatility transmission. Moreover, different than other studies in this area, we utilize high-frequency data for establishing realized volatility. This estimator allows for amore precise estimation of volatility and, consequently, an improved inference about volatility spillovers. We uncover a number of interesting and significant spillover effects between the UK, US and Japanese equity markets and the oil market. Analyzing first the whole sample period, we identify several causality relationships indicating that the equity markets were leading the volatility of crude oil. The interrelation between the realized volatilities in the full sample is mostly driven by the short term shocks. Since over the last decade, the markets experienced several significant events, we divide the sample in pre-crisis, crisis and after-crisis subperiods in order to obtain a clear understanding of the source of the volatility comovements between crude oil and equity futures. The source of the volatility transmission in thesemarkets appears to be the period starting with the financial crisis. Until 2008, we find no evidence for significant Granger causalities and only a few significant coefficients being mostly related to the mid- or long-term volatility component. Also the conditional correlation of the residuals of the models remains rather low. During the crisis period of higher volatility levels, we can observe significant Granger causality going from the US and UK market to the oil futures volatility. The explanation is on hand, since the recent financial crisis originated fromthemarkets for financial assets rather than from the overall shape of the economy. When the sub-primemarket collapsed in 2008, the equity and derivatives markets were already falling. The world economy followed these developments from the mid 2008 on realizing that the ongoing liquidity crunch is going to affect the macroeconomic environment. Japan, on the other hand, was rather following the development in the western part of the world and was pulled into the crisis through an overall uncertainty and liquidity outflow. In the last subsample, the volatility on the financial and commodity markets remained rather high. The strongest impact from the equity to oil market is observed for FTSE, most likely due to the European sovereign debt crisis. For this period, we can still observe significant Granger causalities and more importantly, we see that the short term volatility components are gaining in importance, while the long term volatility components are becoming less relevant, similar to Bubák et al. (2011). Overall, we can also observe, that the own long-term volatility components are losing importance over time. In the post-crisis period, the monthly volatility component becomes insignificant for SP, WTI and Nikkei, while the magnitude of the own short-term volatility component significantly increases. This paper is also unique in the way of considering the second moments of the realized volatility series. Modeling the residuals of the bivariate transmission models by means of a DCC-GARCH framework for thewhole sample,we showthat the correlation between the volatilities of these futures almost doubled during the recent financial market turmoil. Looking at the individual subsamples,we fit CCC-GARCHto the residuals' series and document a significant constant correlation structure of increasing magnitude in the course of time. The results point at the increasing integration of various asset markets over the last decade. The results of our study allow for some policy implications. The equity indices seemto be early indicators of economic risk causing volatility changes in the oil market. Since the energy and equity markets appear to be more integrated in terms of volatility as described before, it is important to consider this fact for derivatives valuation and potential regulation. Implications for portfolio allocation are obvious as well. The findings show the importance of investors to beware of a variety of different markets since news in one market may impact other markets through a number of interrelations. For further research, the simultaneous consideration of multiple assets may be necessary to gain additional insights into the volatility transmission process between energy and equity markets. As emphasized in Corsi et al. (2012), the need of “a flexible yet parsimoniousmultivariate HAR-type extensions that remain computationally feasible in large dimensions” indicates the imperative of further theoretical and empirical work.