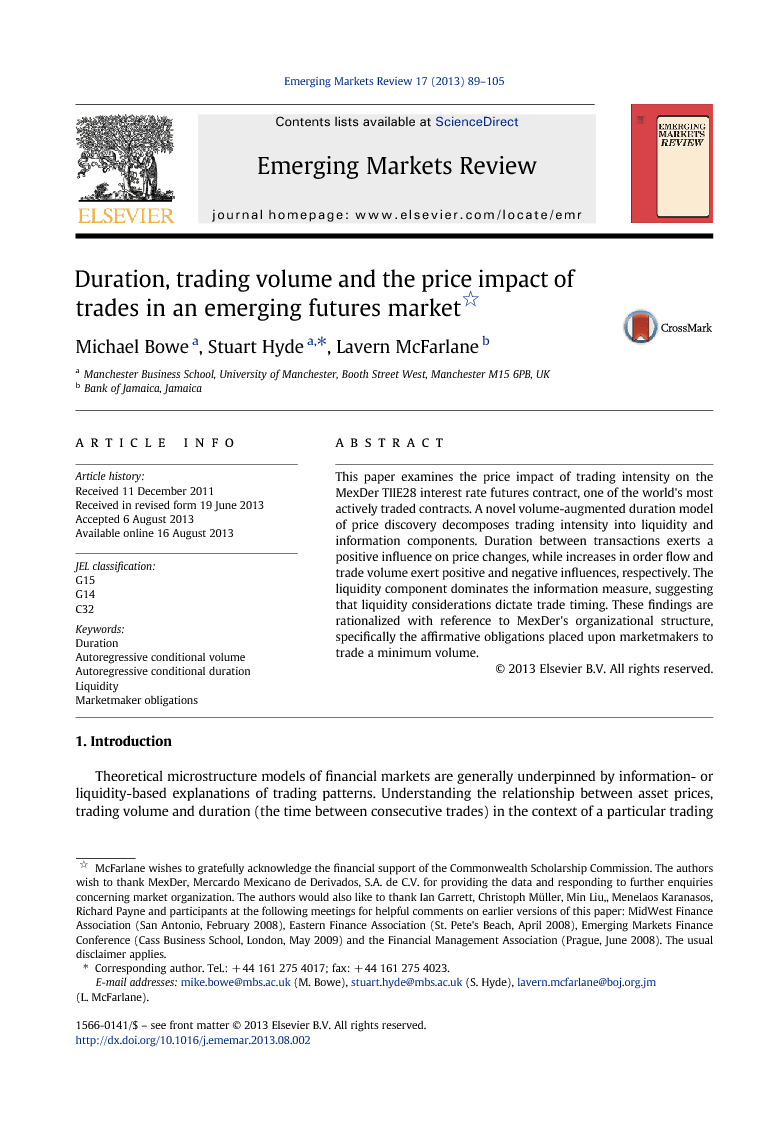 This paper examines the price impact of trading intensity on the MexDer TIIE28 interest rate futures contract, one of the world's most actively traded contracts. A novel volume-augmented duration model of price discovery decomposes trading intensity into liquidity and information components. Duration between transactions exerts a positive influence on price changes, while increases in order flow and trade volume exert positive and negative influences, respectively. The liquidity component dominates the information measure, suggesting that liquidity considerations dictate trade timing. These findings are rationalized with reference to MexDer's organizational structure, specifically the affirmative obligations placed upon marketmakers to trade a minimum volume.

This paper examines the pricing impact of duration and trading volume in the context of a structural microstructure model of price discovery using data from the emerging futures market of Mexico, MexDer. In their empirical study, Dufour and Engle (2000) document that long duration has a lower impact on price than short duration. Extending Dufour and Engle (2000) by decomposing the duration effect into liquidity and information effects, Ben Sita and Westerholm (2006) find evidence that both components exert a positive influence on price changes. This analysis examines six years of tick by tick data for one of the world's most liquid futures contracts, the 28-day equilibrium interbank interest rate futures contract, TIIE28, on MexDer. In 2006 this contract accounted for 93% of total MexDer trading volume and 98.9% of the exchange's open interest, and was the 3rd most actively traded futures contracts world-wide. The findings involving transaction duration show that the transient and persistent components of duration exert positive and negative influences on price changes, respectively. Overall, the net effect is similar to the evidence provided by Ben Sita and Westerholm (2006). In contrast to Dufour and Engle (2000), long duration is found to have a greater impact on price changes than short duration. The analysis of trading volume suggests that price changes tend to decrease when there is an increase in trade volume. Additionally, increases in order flow exert a positive influence on price changes, albeit to a lesser extent than the influence of duration. The presence of volume persistence and trading volume clustering documented in the results is consistent with Admati and Pfleiderer (1988) who maintain that, in equilibrium, discretionary liquidity traders choose to trade together generating a clustering of trading volume. The preferred interpretation of these features is institutionally based, and centers around the affirmative obligations of marketmakers on MexDer and the exclusive rights they hold to initiate certain important categories of discretionary trades. This empirical evidence is consistent with these exclusive trading rights enabling marketmakers to efficiently manage both the price risk associated with holding an inventory of positions and any adverse selection costs arising from trading with informed traders. Note that this interpretation of the price impact measures accords with existing empirical studies which provide little support for the view that marketmakers rebalance their inventory through revisions to quoted prices, but rather mitigate inventory holding costs through discretionary trading when their marketmaking obligations are not binding (Panayides, 2007). The importance of the supply of liquidity components suggests that marketmakers trading behavior dominates the price impact of trade process variables on MexDer. Further, the results of this paper indirectly suggest that market making obligations or constraints such as position limits, or short sales constraints, dictated by the specific institutional context in which trading occurs, may be of relevance in determining the pricing impact of trade process variables in empirical market microstructure studies.