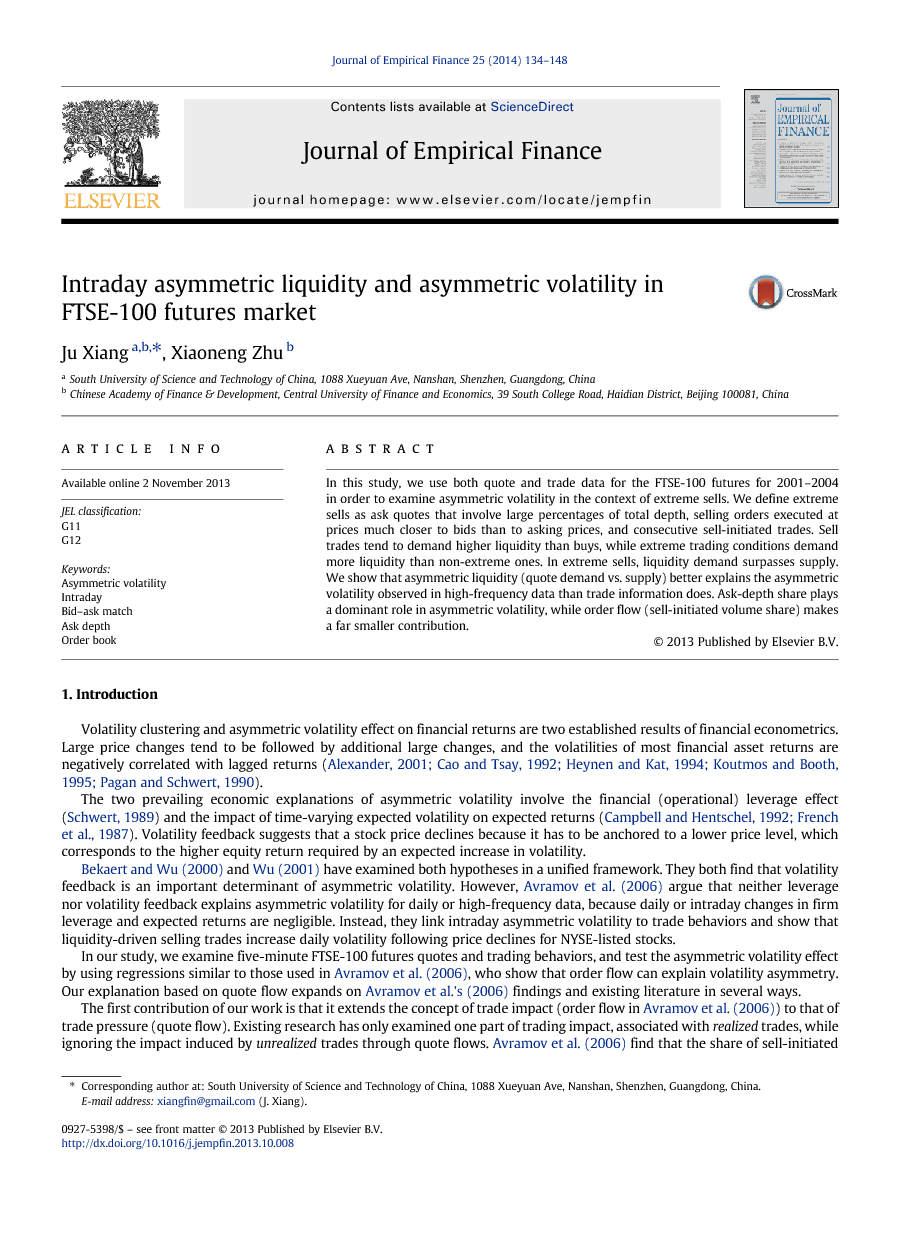 In this study, we use both quote and trade data for the FTSE-100 futures for 2001–2004 in order to examine asymmetric volatility in the context of extreme sells. We define extreme sells as ask quotes that involve large percentages of total depth, selling orders executed at prices much closer to bids than to asking prices, and consecutive sell-initiated trades. Sell trades tend to demand higher liquidity than buys, while extreme trading conditions demand more liquidity than non-extreme ones. In extreme sells, liquidity demand surpasses supply. We show that asymmetric liquidity (quote demand vs. supply) better explains the asymmetric volatility observed in high-frequency data than trade information does. Ask-depth share plays a dominant role in asymmetric volatility, while order flow (sell-initiated volume share) makes a far smaller contribution.

Volatility clustering and asymmetric volatility effect on financial returns are two established results of financial econometrics. Large price changes tend to be followed by additional large changes, and the volatilities of most financial asset returns are negatively correlated with lagged returns (Alexander, 2001, Cao and Tsay, 1992, Heynen and Kat, 1994, Koutmos and Booth, 1995 and Pagan and Schwert, 1990). The two prevailing economic explanations of asymmetric volatility involve the financial (operational) leverage effect (Schwert, 1989) and the impact of time-varying expected volatility on expected returns (Campbell and Hentschel, 1992 and French et al., 1987). Volatility feedback suggests that a stock price declines because it has to be anchored to a lower price level, which corresponds to the higher equity return required by an expected increase in volatility. Bekaert and Wu (2000) and Wu (2001) have examined both hypotheses in a unified framework. They both find that volatility feedback is an important determinant of asymmetric volatility. However, Avramov et al. (2006) argue that neither leverage nor volatility feedback explains asymmetric volatility for daily or high-frequency data, because daily or intraday changes in firm leverage and expected returns are negligible. Instead, they link intraday asymmetric volatility to trade behaviors and show that liquidity-driven selling trades increase daily volatility following price declines for NYSE-listed stocks. In our study, we examine five-minute FTSE-100 futures quotes and trading behaviors, and test the asymmetric volatility effect by using regressions similar to those used in Avramov et al. (2006), who show that order flow can explain volatility asymmetry. Our explanation based on quote flow expands on Avramov et al.'s (2006) findings and existing literature in several ways. The first contribution of our work is that it extends the concept of trade impact (order flow in Avramov et al. (2006)) to that of trade pressure (quote flow). Existing research has only examined one part of trading impact, associated with realized trades, while ignoring the impact induced by unrealized trades through quote flows. Avramov et al. (2006) find that the share of sell-initiated trade volume in total trading volume, when examined without quotes, significantly explains asymmetric volatility. However, we show that the ask-depth share as a percentage of total best-quote depth is much more significant in explaining asymmetric effects in FTSE-100 futures data than sell-volume share does. In our study, we measure selling pressure with ask-depth share; selling eagerness, which is a trade price's relative position in the bid–ask spread; and the consecutiveness of sell-initiated trades. We find that, under heavy selling pressure, ask-depth share associated with negative lagged unexpected returns significantly increases return volatility. Sell-initiated volume shares, when similarly explored, are much less significant in explaining asymmetric volatility. These regression results show that quote flow can be more informative than order flow data.1 This result has methodological implications, as it suggest that statistical models that ignore quote flow, such as that in Chordia et al. (2002), may not be well-specified. Our second contribution to research is the examination of sell- and buy-run situations. A sell-run (buy-run) is defined as three or more consecutive sell-initiated (buy-initiated) trades. We find that trade and quote behaviors in runs are different from those in non-runs, and that those in sell-runs are different from those in buy-runs. Avramov et al. (2006) do not explicitly examine extreme-selling situations, even though asymmetric volatility is, by definition, much more related to large negative returns, while Huang and Wang (2009) link the asymmetric price effect in extreme market crashes to liquidity. The documented liquidity asymmetries and the significance of ask-depth share in affecting volatility regressions help us propose a liquidity-based explanation for the asymmetric volatility effect, which complements Avramov et al.'s (2006) trade-based explanation for high-frequency data. First, quote data (ask and bid depth, spread, and quote money flow) are intrinsically good proxies for liquidity. Second, when there is a negative unexpected return associated with heavy selling pressure, sell orders tend to compete with each other for limited liquidity-supplying buying orders, causing prices to dive and volatility to spike. Selling orders following positive returns, however, are more likely to provide liquidity for buyers, and thus could dampen market volatility. Third, as quotes are three times more active than trades in terms of count and volume, our methodology allows us to capture a more detailed picture of financial market trading. Our results are consistent with intuition. We find that when selling pressure is severe, the worst consequence of an asymmetric liquidity scenario is that sell orders can barely be filled at all, rather than that they can be filled eventually. When high selling pressure is combined with low bid depth, sellers must wait less long and sell at prices closer to bids. Fire sales (like the three to six runs of sell-initiated trades examined in this paper) leave the market with little time to recover from the resulting lack of liquidity, and tend to drive buyers out of the market. This is because in the face of such relentless selling, most would-be buyers are worried about the private information behind the trades, and want to wait until information is released or prices stabilize. We find that sell-run eagerness increases in extremity from three to six runs. An avalanche effect of the simultaneous exhaustion of liquidity and price drops can occur, until most investors believe that the market is stable. Thus, the asymmetry between liquidity demand and supply produces asymmetric volatility, in that the price plummets initially but then rebounds as soon as investors realize that the market is oversold. The rest of this paper is organized as follows. The next section introduces the data sample and presents descriptive statistics. Section 3 discusses hypotheses and methodologies. We present the results and robustness checks in 4 and 5 concludes.

Using the FTSE-100 futures transaction data, we show that sell- and buy-initiated trades are different from one another. Our findings also demonstrate that extreme selling situations are associated with greater liquidity demand from sellers (larger ask-depth share and more selling eagerness), yet provide sellers with a smaller liquidity supply because of shallower bid depth.Our hypothesis is that asymmetric volatility is mainly due to the asymmetry of liquidity demand and supply when unexpected returns are negative. We test this hypothesis by regressing five-minute absolute unexpected returns on cross-effect variables of the last two periods' unexpected returns, with respect to ask-depth share, sell-volume share, and spread. We find that ask-depth shares contribute the most to asymmetric volatility, with negative coefficients in cross-effect terms, and that sell-volume shares contribute far less. Further regressions using cross-effect variables separated by negative/positive lagged returns show that the ask-depth share mainly contributes when past returns have been negative. Thus, an asymmetric volatility effect occurs when huge liquidity demand results from extreme sells, as the substantially lower bid depth cannot provide sufficient liquidity for sellers. The stronger impact of ask-depth share than sell-volume share shows that asymmetry in liquidity (supply vs. demand) is much more important than asymmetry in trades (buy vs. sell). High sell-initiated volume share implies that there are still large buy orders, even though buyers are not so eager to buy, which is better than when a large number of unfilled selling orders exist (high ask-depth share).