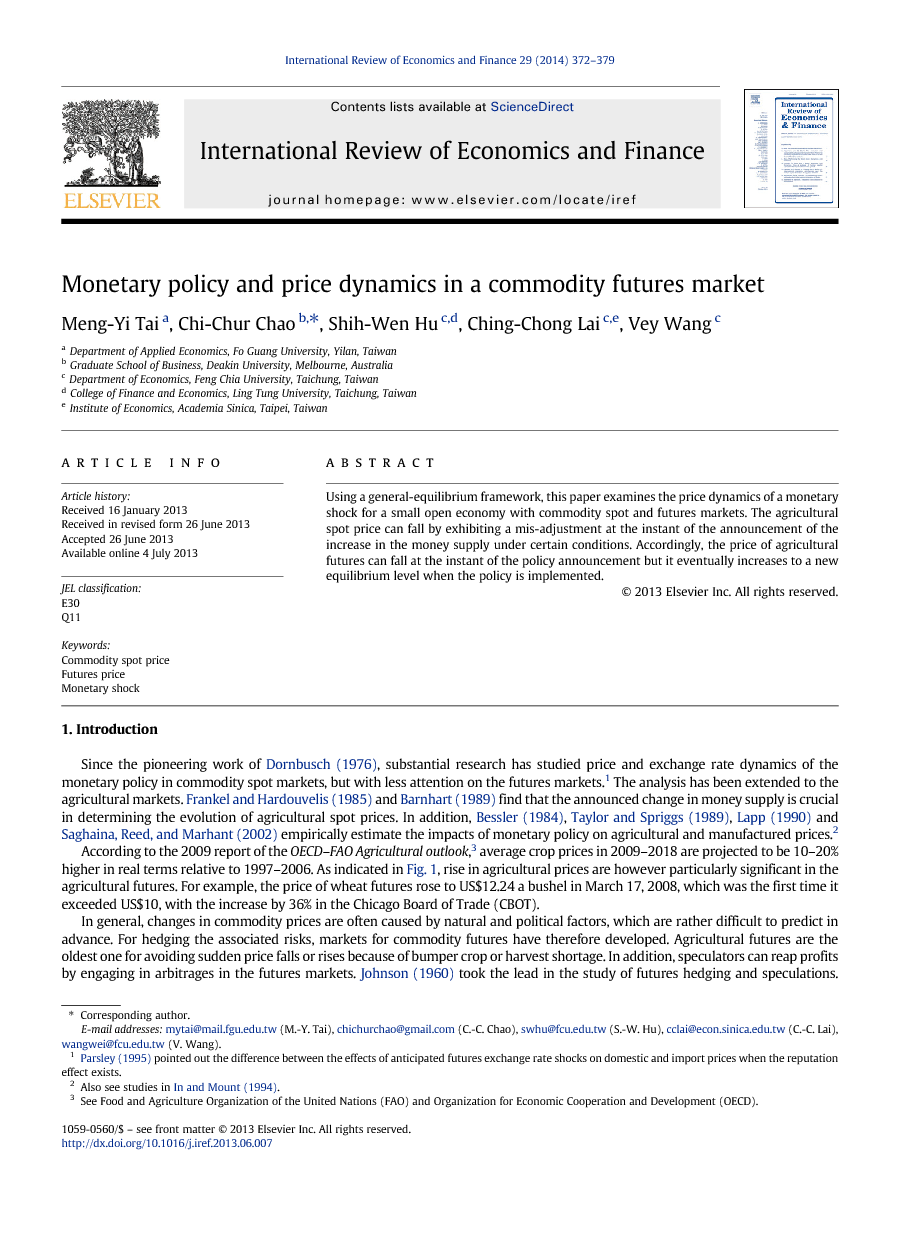 Using a general-equilibrium framework, this paper examines the price dynamics of a monetary shock for a small open economy with commodity spot and futures markets. The agricultural spot price can fall by exhibiting a mis-adjustment at the instant of the announcement of the increase in the money supply under certain conditions. Accordingly, the price of agricultural futures can fall at the instant of the policy announcement but it eventually increases to a new equilibrium level when the policy is implemented.

Since the pioneering work of Dornbusch (1976), substantial research has studied price and exchange rate dynamics of the monetary policy in commodity spot markets, but with less attention on the futures markets.1 The analysis has been extended to the agricultural markets. Frankel and Hardouvelis (1985) and Barnhart (1989) find that the announced change in money supply is crucial in determining the evolution of agricultural spot prices. In addition, Bessler (1984), Taylor and Spriggs (1989), Lapp (1990) and Saghaina, Reed, and Marhant (2002) empirically estimate the impacts of monetary policy on agricultural and manufactured prices.2 According to the 2009 report of the OECD–FAO Agricultural outlook, 3 average crop prices in 2009–2018 are projected to be 10–20% higher in real terms relative to 1997–2006. As indicated in Fig. 1, rise in agricultural prices are however particularly significant in the agricultural futures. For example, the price of wheat futures rose to US$12.24 a bushel in March 17, 2008, which was the first time it exceeded US$10, with the increase by 36% in the Chicago Board of Trade (CBOT).In general, changes in commodity prices are often caused by natural and political factors, which are rather difficult to predict in advance. For hedging the associated risks, markets for commodity futures have therefore developed. Agricultural futures are the oldest one for avoiding sudden price falls or rises because of bumper crop or harvest shortage. In addition, speculators can reap profits by engaging in arbitrages in the futures markets. Johnson (1960) took the lead in the study of futures hedging and speculations. Elfakhani and Wionzek (1997) later analyzed the efficiency of Canadian canola and American soybean oil futures markets during 1981–1987 and 1988–1993. On the other hand, Bond (1984) was the first one to use a partial equilibrium model to examine interest rate shocks on futures prices. However, general-equilibrium analysis on the impacts of monetary shocks on price and exchange rate dynamics in both spot and futures markets, with a special attention on the agricultural futures, remains deficit. Based on a small open, general-equilibrium framework with goods, money, bonds and foreign exchange markets, this paper investigates the impacts of the announcement of a monetary expansion on the price dynamics in commodity spot and futures markets as well as on the dynamic adjustments of the exchange rate for the economy. In particular, the phenomena for overshooting and mis-adjustments of the spot and futures prices can occur and the conditions of them will be identified and explained. These results then provide a vivid illustration for the fluctuations of commodity prices followed by the announcement of the change in the money supply. The paper is organized as follows. Section 2 outlines the structure of the general-equilibrium framework of the commodity, money and foreign exchange markets, while Section 3 characterizes the steady-state equilibrium and the dynamic behavior of the economy associated with monetary shocks. Section 4 provides conclusions.

This paper has analyzed the price ynamics of a monetary shock for a small open economy with commodity spot and futures markets.17 We have found that the agricultural spot price can fall by exhibiting a mis-adjustment at the instant of the announcement of the increase in the money supply when the price elasticities for the demand and supply of agricultural products are relatively small or the speculative degree for agricultural futures is relatively large. Accordingly, the price of agricultural futures falls at the instant of the policy announcement but it eventually increases to a new equilibrium level when the policy is implemented.