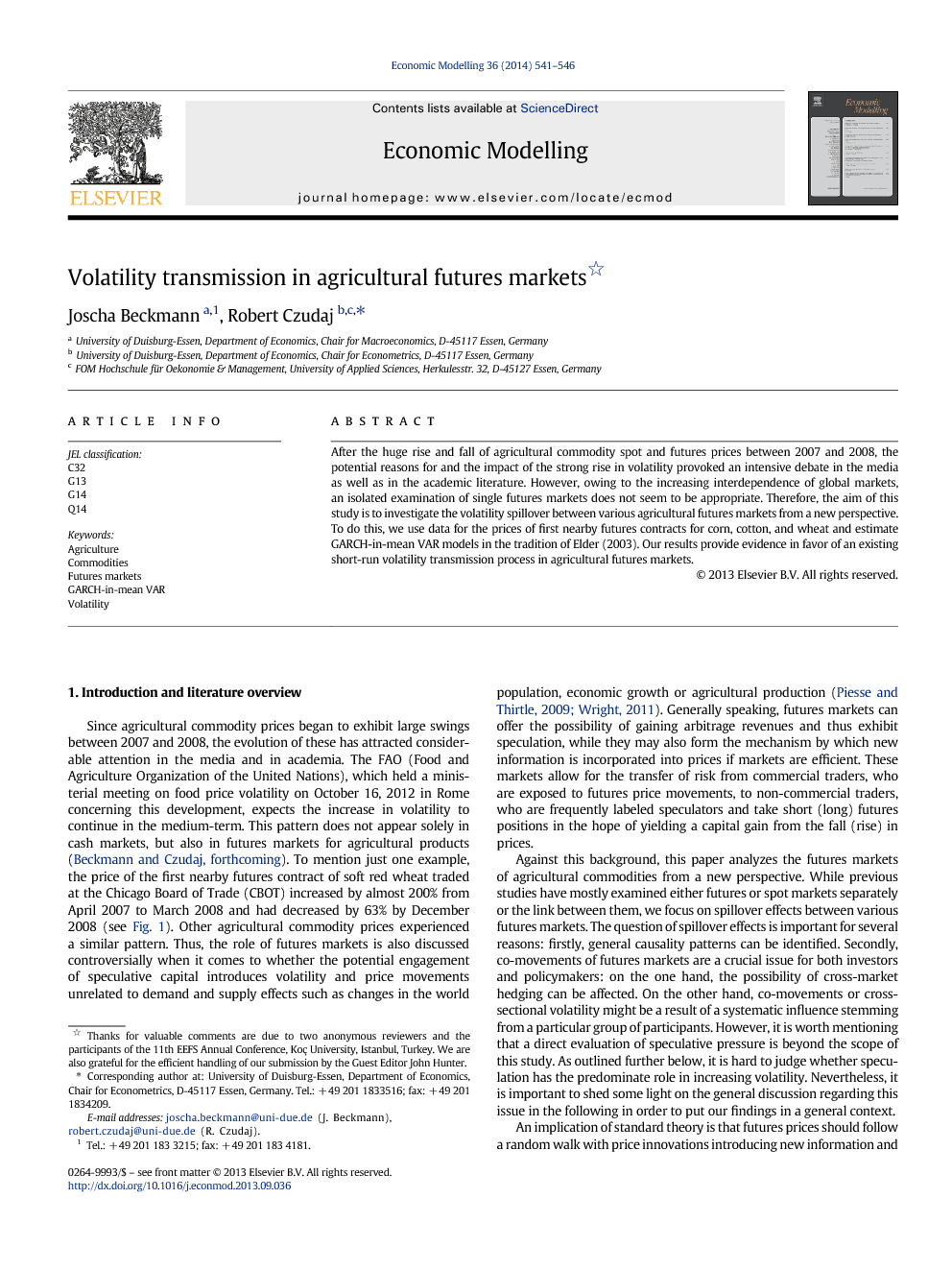 After the huge rise and fall of agricultural commodity spot and futures prices between 2007 and 2008, the potential reasons for and the impact of the strong rise in volatility provoked an intensive debate in the media as well as in the academic literature. However, owing to the increasing interdependence of global markets, an isolated examination of single futures markets does not seem to be appropriate. Therefore, the aim of this study is to investigate the volatility spillover between various agricultural futures markets from a new perspective. To do this, we use data for the prices of first nearby futures contracts for corn, cotton, and wheat and estimate GARCH-in-mean VAR models in the tradition of Elder (2003). Our results provide evidence in favor of an existing short-run volatility transmission process in agricultural futures markets.

Applying a GARCH-in-mean VAR model, we have shown that a volatility spillover can be observed in agricultural futures markets in the short-run. More precisely, we have demonstrated that the impact of the volatility of corn futures returns on the returns of cotton and wheat futures is statistically significant, but differs for both markets. This indicates that potential speculation effects on one market could be contagious for other markets and cause an increase in volatility in agricultural futures markets. Therefore, the recent rise in the interdependence of futures markets could be held responsible for the huge increase in volatility in agricultural prices in the last years. For this reason, it is not surprising that the increase in volatility of agricultural futures markets is expected to continue in the future. Through contagion effects, an increase of volatility in a specific market, which might be due to fundamental or non-speculative factors, is likely to transmit to other markets. In terms of policy implications, a reasonable conclusion might be that the frequently adopted macroprudential approach of supervising is superior to focusing on particular markets. However, the finding that volatility transmission is a short-run phenomenon leaves little room for direct ex-post policy actions. Considering that cross-market volatility may reflect market efficiency, it becomes even clearer that the task for policymakers is to analyze the origins of market volatility. Only some of the numerous possible reasons may then require political means. In this context, a distinction between positive and negative spillover effects is also important, since only positive volatility spillovers bear the risk of increasing volatility across markets. Finally, our paper offers an interesting starting point for further research. In particular, investigating different sources of volatility in agricultural futures markets might be an interesting research topic for the future. In particular, the frequently discussed link between the engagement of speculators and volatility remains on the research agenda.