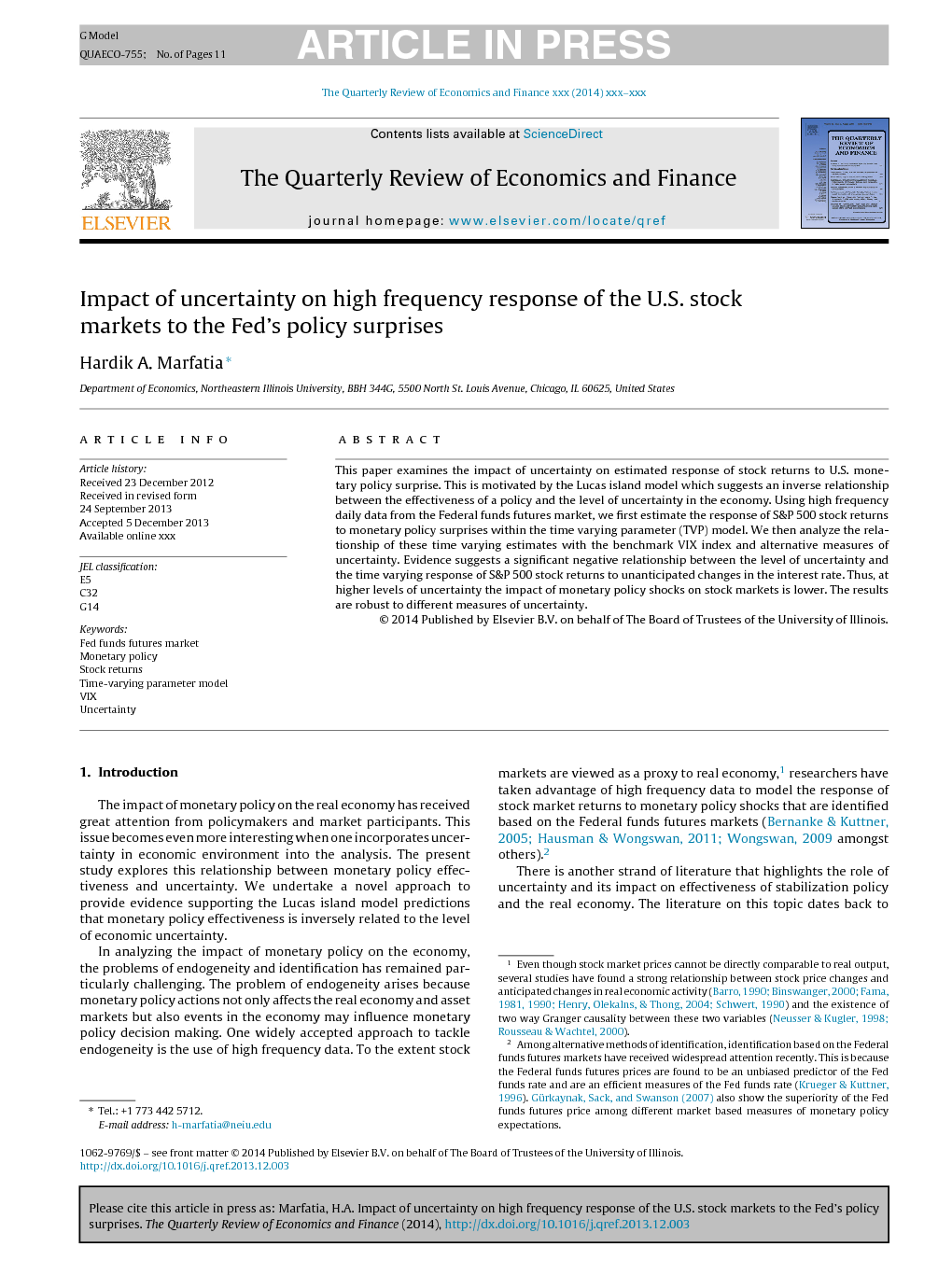 The impact of monetary policy on the real economy has received great attention from policymakers and market participants. This issue becomes even more interesting when one incorporates uncertainty in economic environment into the analysis. The present study explores this relationship between monetary policy effectiveness and uncertainty. We undertake a novel approach to provide evidence supporting the Lucas island model predictions that monetary policy effectiveness is inversely related to the level of economic uncertainty. In analyzing the impact of monetary policy on the economy, the problems of endogeneity and identification has remained particularly challenging. The problem of endogeneity arises because monetary policy actions not only affects the real economy and asset markets but also events in the economy may influence monetary policy decision making. One widely accepted approach to tackle endogeneity is the use of high frequency data. To the extent stock markets are viewed as a proxy to real economy,1 researchers have taken advantage of high frequency data to model the response of stock market returns to monetary policy shocks that are identified based on the Federal funds futures markets ([Bernanke and Kuttner, 2005], [Hausman and Wongswan, 2011] and [Wongswan, 2009] amongst others).2 There is another strand of literature that highlights the role of uncertainty and its impact on effectiveness of stabilization policy and the real economy. The literature on this topic dates back to the scholarly work of Lucas (1973) and Ball, Mankiw, and Romer (1988), popularly known as the Lucas island model. The principal idea of this model stems from the existence of imperfect information about the relative importance of aggregate and idiosyncratic shocks. When the economy experiences large shocks to aggregate demand the suppliers would attribute most of the changes in the price of their goods to changes in the general price level. Intuitively, this means the estimated real impact of a demand shock on output is lower for the economy that suffers from higher volatility in the nominal GDP. The Lucas model thus predicts an inverse relationship between the level of economic uncertainty and effectiveness of the policy shock. The literature on the role of uncertainty has broadly found that uncertainty has a strong negative impact on various macroeconomic variables. For example, Ramey and Ramey (1995) finds that countries with higher volatility have lower economic growth. Similar evidence has been found in Romer (1990) and Drechsler and Yaron (2011). While most of these studies are cross-sectional, we analyze the relationship between uncertainty and policy effectiveness using a time-series approach for a single country – the U.S. This not only avoids problems associated with averaging variables across countries but also it is more appropriate given the international differences in the central bank operating procedures and transmission mechanisms of each country in the world. This paper is an attempt to relate the literature on monetary policy and uncertainty. In particular, we want to examine the role of uncertainty in the effectiveness of monetary policy shocks. In order to do so, we estimate the response of stock returns to monetary policy shocks using a time varying parameter model. After estimating the response coefficient the next important step in understanding the role of uncertainty is to devise an appropriate proxy to capture uncertainty at high frequency. In a widely cited paper, Bloom (2009) shows that stock market volatility index is strongly correlated with various measures of micro- and macro-level uncertainty including bond spreads, disagreement among professional forecasters, and cross-sectional spread of firms profit growth and industry productivity growth. This has lead us to use the volatility in stock market options as a measure of implied aggregate uncertainty.3 We use the popular VIX index (often referred to as investors fear gauge) as a benchmark measure of uncertainty. As a test of robustness, we also consider various alternative measures of volatility in the financial markets to proxy uncertainty. The results obtained in this paper broadly support predictions of the Lucas island model. We find that at higher levels of uncertainty represented by the benchmark VIX index the time varying response of the stock market to Fed's policy surprises is lower. This negative association is also found across various alternative conditional and unconditional measures of uncertainty used in the paper. According to our estimates, amongst all the measures of uncertainty, the measure of uncertainty in the short term bond market is found to offer highest explanatory power in explaining the response of stock markets to monetary policy surprises. Thus, a depressed sentiment in the financial markets leads to a lower impact of Fed's policy surprises on stock markets and vice versa. The study contributes to the existing literature on multiple fronts. First, the high frequency daily data used in the study provides more convincing evidence in support of the Lucas island model that higher uncertainty leads to smaller impact of monetary policy shocks. Second, the TVP model used in the study is able to unveil far richer dynamics across time of the impact of monetary policy shocks on stock markets than previous studies that use the fixed coefficient approach.4 Third, the study considers various measures of uncertainty and the results are robust to all the alternative proxies. Most existing studies mainly focus on the direct impact of uncertainty on economic variables and consider one or only few measures of uncertainty ([Baker et al., 2011], [Bomberger, 1996] and [Connolly et al., 2005]). The rest of the paper is organized as follows. Section 2 provides the literature review on the topic. The data description and various measures of uncertainty are developed in Section 3. In Section 4, we specify the methodology adopted. Section 5 uses TVP model to discuss the time variation in the impact of Fed's policy surprise on stock markets and analyses how these time varying estimates depend on the level of uncertainty, followed by conclusions in Section 6.