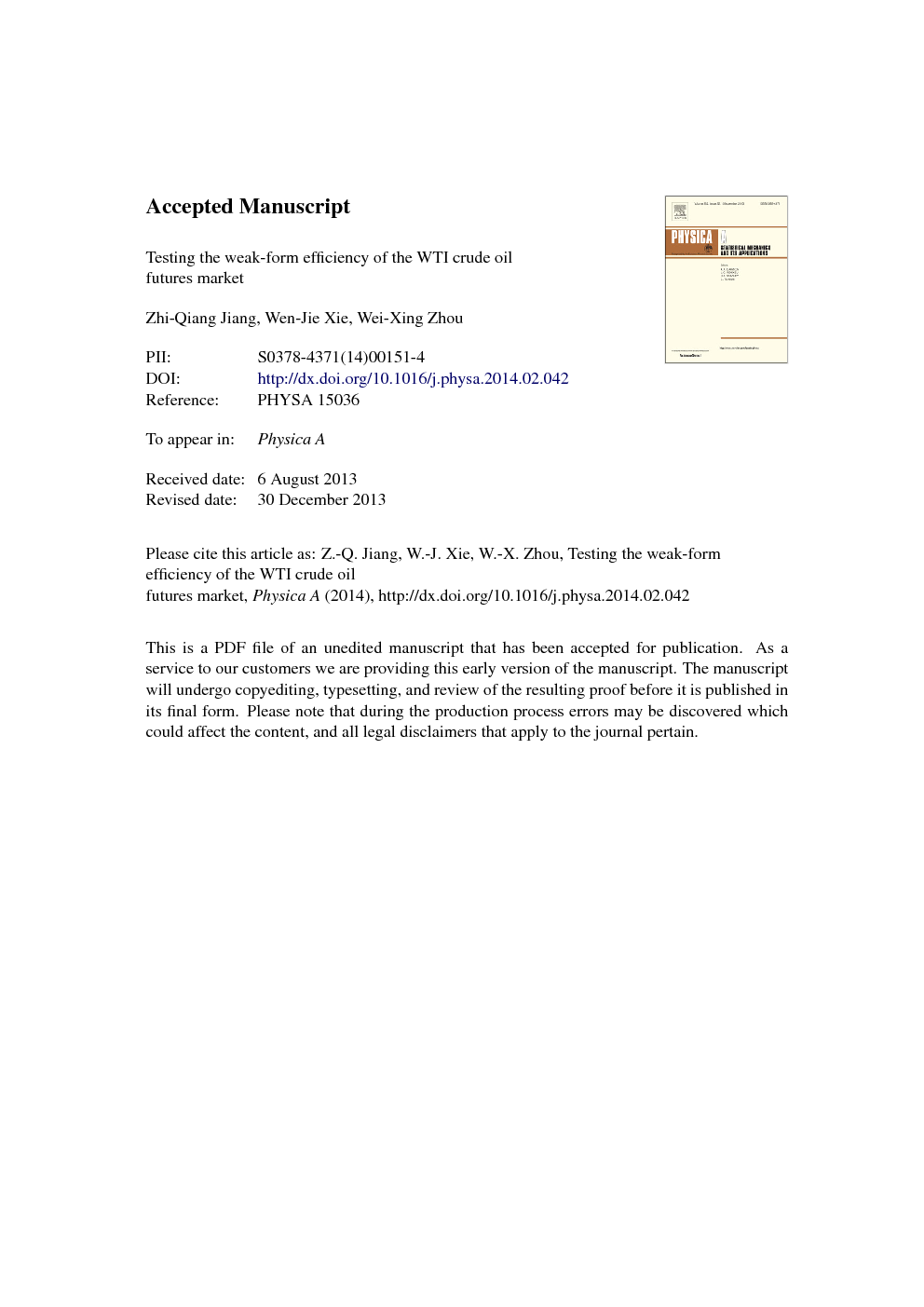 The weak-form efficiency of energy futures markets has long been studied and empirical evidence suggests controversial conclusions. In this work, nonparametric methods are adopted to estimate the Hurst indexes of the WTI crude oil futures prices (1983–2012) and a strict statistical test in the spirit of bootstrapping is put forward to verify the weak-form market efficiency hypothesis. The results show that the crude oil futures market is efficient when the whole period is considered. When the whole series is divided into three sub-series separated by the outbreaks of the Gulf War and the Iraq War, it is found that the Gulf War reduced the efficiency of the market. If the sample is split into two sub-series based on the signing date of the North American Free Trade Agreement, the market is found to be inefficient in the sub-periods during which the Gulf War broke out. Same analysis on short time series in moving windows shows that the market is inefficient only when some turbulent events occur, such as the oil price crash in 1985, the Gulf war, and the oil price crash in 2008.

The unfolding financial crisis triggered by the US subprime mortgage crisis in 2007 has been viewed as the most severe in the past centenary after the US stock market crash in 1929. The latest financial crisis is followed by the global economic recession and the European sovereign debt crisis. During this period, we have witnessed the boom and bust of many financial and commodities bubbles [1] and [2]. The 2006–2008 crude oil bubble was a significant example [3]. The West Texas Intermediate (WTI) oil prices experienced an accelerated rise followed by a spectacular crash in July 2008. When measured in terms of daily close prices, the peak of USD 145.29 per barrel was reached on July 3, 2008 and a significant low of USD 33.87 was seen on December 19, 2008, which is a level not seen since 2004. The historical high was USD 147.2 per barrel, recorded in the middle of the day of July 11, 2008. In May 2008 before the July peak, Sornette et al. utilize the log-periodic power-law (LPPL) models for financial bubbles [3], [4] and [5] to analyze the oil prices and confirmed the presence of a speculative bubble. Furthermore, they successfully predicted the crash of the oil bubble with high precision. The original prediction was posted on the arXiv (0806.1170v1) on 6 June 2008. A few weeks later, Drożdż et al. successfully predict the Brent oil price crash (see arXiv:0802.4043v2, 24 June 2008) based on the LPPL models [6]. Yu et al. propose a neural network ensemble learning paradigm based on empirical mode decomposition to forecast crude oil prices and successfully predicted the turning point and the oil price plummet [7]. More generally, there are a lot of studies showing that the oil prices are predictable both in turbulent periods and in normal phases. For instance, Shambora and Rossiter use an artificial neural network model with moving average crossover inputs to predict prices in the crude oil futures market and uncovered significant profitability [8], and Wang and Yang find significant out-of-sample predictability of intraday high-frequency (30-min) WTI crude oil futures prices in a bear phase (December 1, 2000–November 31, 2001) and a bull phase (November 1, 2006–October 31, 2007) [9]. A direct consequence of the predictability of oil prices is that the oil futures market is inefficient in the weak form at least in some time periods. In addition, the formation of bubbles and its bust imply that the degree of market inefficiency may evolve in a dynamic way. Indeed, quite a few studies have been conducted to directly test the efficiency of the oil markets, most of which devoted to estimate the Hurst index HH using different techniques based on the fact that a process with the Hurst index significantly differing 0.5 does not execute a random walk [10], [11] and [12]. These investigations of oil market efficiency can be classified into two related categories. Some researchers studied oil prices in relatively long periods, while others put emphasis on the evolving behavior of market efficiency in moving windows of relatively short lengths.1 The results are controversial partially due to the facts that different sample periods and estimation methods are used. In this paper, two high-performance nonparametric approaches, the detrended fluctuation analysis (DFA) and the detrending moving average anlaysis (DMA) that have high performance [14], are to estimate the “Hurst index” of the return time series of the WTI crude oil futures at long and short time periods. It is found that the market is efficient in long run and inefficient in some short turmoil periods. The results are statistically significant based on bootstrapping tests. These findings are consistent with the predictability of oil prices. The remainder of this paper is structured as follows. Section 2 provides an extensive review of the literature about the estimation of Hurst index of the energy futures prices. Section 3 describes briefly the data analysed. Section 4 presents the two nonparametric approaches adopted. The results are illustrated in Section 5. Section 6 summarizes the paper

In this paper, detailed analyses are performed on the weak-form efficiency of the WTI crude oil futures market by means of DMA and DFA approaches. By using the DMA and DFA exponents as the statistic, a strict statistical test is proposed in the spirit of bootstrapping to check whether the original series exhibit the same memory behaviors as the shuffled series. Performing the statistical tests on the whole series demonstrates the efficiency of the crude oil market in the investigated period 1983-2012. Statistical tests have also been carried out on five sub-series in two ways. The two sub-series covering the Gulf War were found to exhibit long-memory behaviors, which means that the Gulf War had an impact of reducing the efficiency of crude oil market. And we also discovered that there were no long-term correlations in other three sub-series. By adopting the method of moving windows inspired by Cajueiro and Tabak [32], statistical tests are further conducted on the observations in each window. This offers us a new insight on the understanding of the evolution of DMA and DFA exponents. It is found that there are a lot of fluctuations in the exponent curve; however, most of the fluctuations are inside the 2.5%-97.5% quantile intervals of the exponents of shuffled series. This implies that the crude oil market is efficient in most time periods. The excess of the exponents over the 97.5% quantile of the shuffled series for the DMA and DFA curves can be connected to some turbulent events, including the oil price crash in 1985, the Gulf war, and the oil price crash in 2008. The inefficiency around 2008 is consistent with the successful prediction of the oil price bubble by Sornette et al [3] in 2008. The results further reveal that the crude oil market requires a certain time to digest the information. If the investigation time scale is longer than the digesting time, the market looks efficient, and if the investigation time scale is shorter than the digesting time, the market looks inefficient.