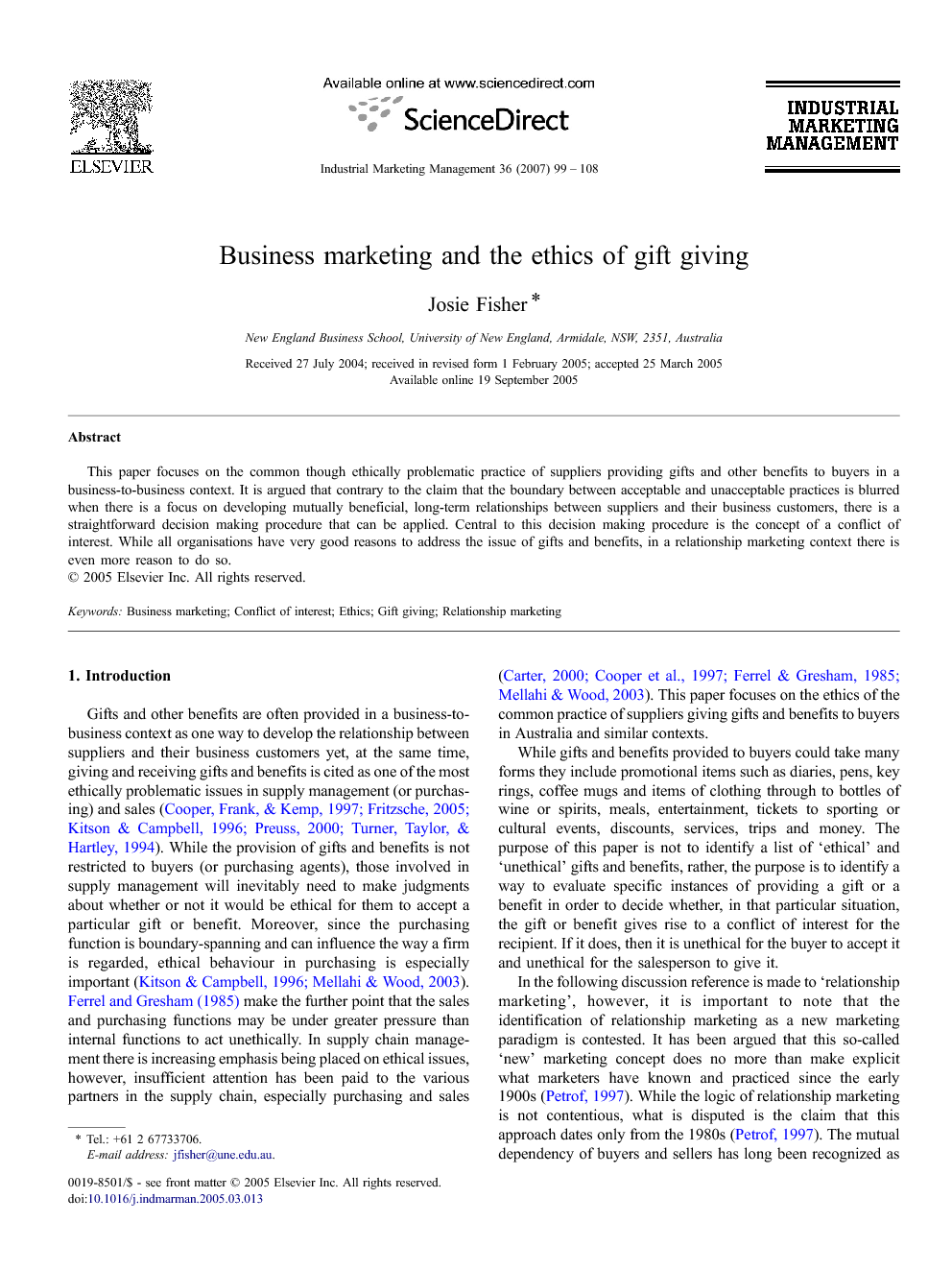 This paper focuses on the common though ethically problematic practice of suppliers providing gifts and other benefits to buyers in a business-to-business context. It is argued that contrary to the claim that the boundary between acceptable and unacceptable practices is blurred when there is a focus on developing mutually beneficial, long-term relationships between suppliers and their business customers, there is a straightforward decision making procedure that can be applied. Central to this decision making procedure is the concept of a conflict of interest. While all organisations have very good reasons to address the issue of gifts and benefits, in a relationship marketing context there is even more reason to do so.

Gifts and other benefits are often provided in a business-to-business context as one way to develop the relationship between suppliers and their business customers yet, at the same time, giving and receiving gifts and benefits is cited as one of the most ethically problematic issues in supply management (or purchasing) and sales (Cooper et al., 1997, Fritzsche, 2005, Kitson & Campbell, 1996, Preuss, 2000 and Turner et al., 1994). While the provision of gifts and benefits is not restricted to buyers (or purchasing agents), those involved in supply management will inevitably need to make judgments about whether or not it would be ethical for them to accept a particular gift or benefit. Moreover, since the purchasing function is boundary-spanning and can influence the way a firm is regarded, ethical behaviour in purchasing is especially important (Kitson & Campbell, 1996 and Mellahi & Wood, 2003). Ferrel and Gresham (1985) make the further point that the sales and purchasing functions may be under greater pressure than internal functions to act unethically. In supply chain management there is increasing emphasis being placed on ethical issues, however, insufficient attention has been paid to the various partners in the supply chain, especially purchasing and sales (Carter, 2000, Cooper et al., 1997, Ferrel & Gresham, 1985 and Mellahi & Wood, 2003). This paper focuses on the ethics of the common practice of suppliers giving gifts and benefits to buyers in Australia and similar contexts. While gifts and benefits provided to buyers could take many forms they include promotional items such as diaries, pens, key rings, coffee mugs and items of clothing through to bottles of wine or spirits, meals, entertainment, tickets to sporting or cultural events, discounts, services, trips and money. The purpose of this paper is not to identify a list of ‘ethical’ and ‘unethical’ gifts and benefits, rather, the purpose is to identify a way to evaluate specific instances of providing a gift or a benefit in order to decide whether, in that particular situation, the gift or benefit gives rise to a conflict of interest for the recipient. If it does, then it is unethical for the buyer to accept it and unethical for the salesperson to give it. In the following discussion reference is made to ‘relationship marketing’, however, it is important to note that the identification of relationship marketing as a new marketing paradigm is contested. It has been argued that this so-called ‘new’ marketing concept does no more than make explicit what marketers have known and practiced since the early 1900s (Petrof, 1997). While the logic of relationship marketing is not contentious, what is disputed is the claim that this approach dates only from the 1980s (Petrof, 1997). The mutual dependency of buyers and sellers has long been recognized as a key characteristic of business marketing (Ford, 1996 and Hayes et al., 1996). Relationship marketing has been identified as a central tenet in the business-to-business literature with many researchers claiming that successful firms develop long-term, mutually supportive relationships with their buyers (Tellefsen & Thomas, 2005). For the purposes of this paper, it is not necessary to settle the debate about whether or not relationship marketing is a new marketing concept, especially in a business-to-business context. The literature relating to relationship marketing is cited because it makes explicit the characteristics associated with an approach that aims to develop mutually beneficial, long-term relationships between suppliers and buyers. The term ‘relationship marketing’ is used simply to identify this marketing approach. A further point that needs to be clarified is that firms are involved in networks of relationships, however, this paper is concerned only with the relationship between the purchasing and sales functions.

The claim that a relationship marketing context blurs the boundary between acceptable and unacceptable practices has been shown to be false. The plausibility of this claim results from the failure to distinguish two different propositions: (1) That practices aimed at enhancing the relationship between the buying and selling organisations are acceptable, and (2) that providing gifts and benefits in order to enhance the relationship between representatives of the two businesses are acceptable. When a distinction between organisations and individuals is made, it becomes much easier to distinguish acceptable from unethical practices. Those benefits and services provided by a supplier to a buying organisation as part of a genuine relationship marketing strategy are unproblematic. Token gifts and low-cost entertainment provided by salespeople to buyers are also unproblematic provided accepting them does not violate the policies of either firm. Unethical practices are those that result in a conflict of interest for the recipient. Whether or not a conflict of interest exists in a particular situation depends on how an objective third party would view particular examples, but this does not mean the boundary between right and wrong is blurred. The responsibility for avoiding conflict of interest situations has been demonstrated to rest not only with buyers. Sellers also have a responsibility not to offer anything that could be seen to compromise the objectivity of the recipient. It is wrong for a buyer to have a conflict of interest, and it is wrong for a salesperson to entice someone to have a conflict of interest. Additionally, in a relationship marketing context, when a conflict of interest is created by a gift or benefit the behaviour of both the buyer and the salesperson undermines the trust and commitment upon which a mutually beneficial relationship is built. Another claim that might support the blurring of boundaries was also shown to be unsubstantiated. Just because there is an industry practice to provide gifts and benefits to buyers, this does not make it acceptable. On the contrary, gifts and benefits are identified as posing one of the most problematic ethical issues in purchasing and sales despite common practice. All organisations have very good reasons to develop, implement and enforce company codes of conduct and policies that make explicit what can be accepted and given. When the organisations are in a mutually beneficial, long-term relationship that depends on trust and commitment there is even more reason to review their current policies and practices.