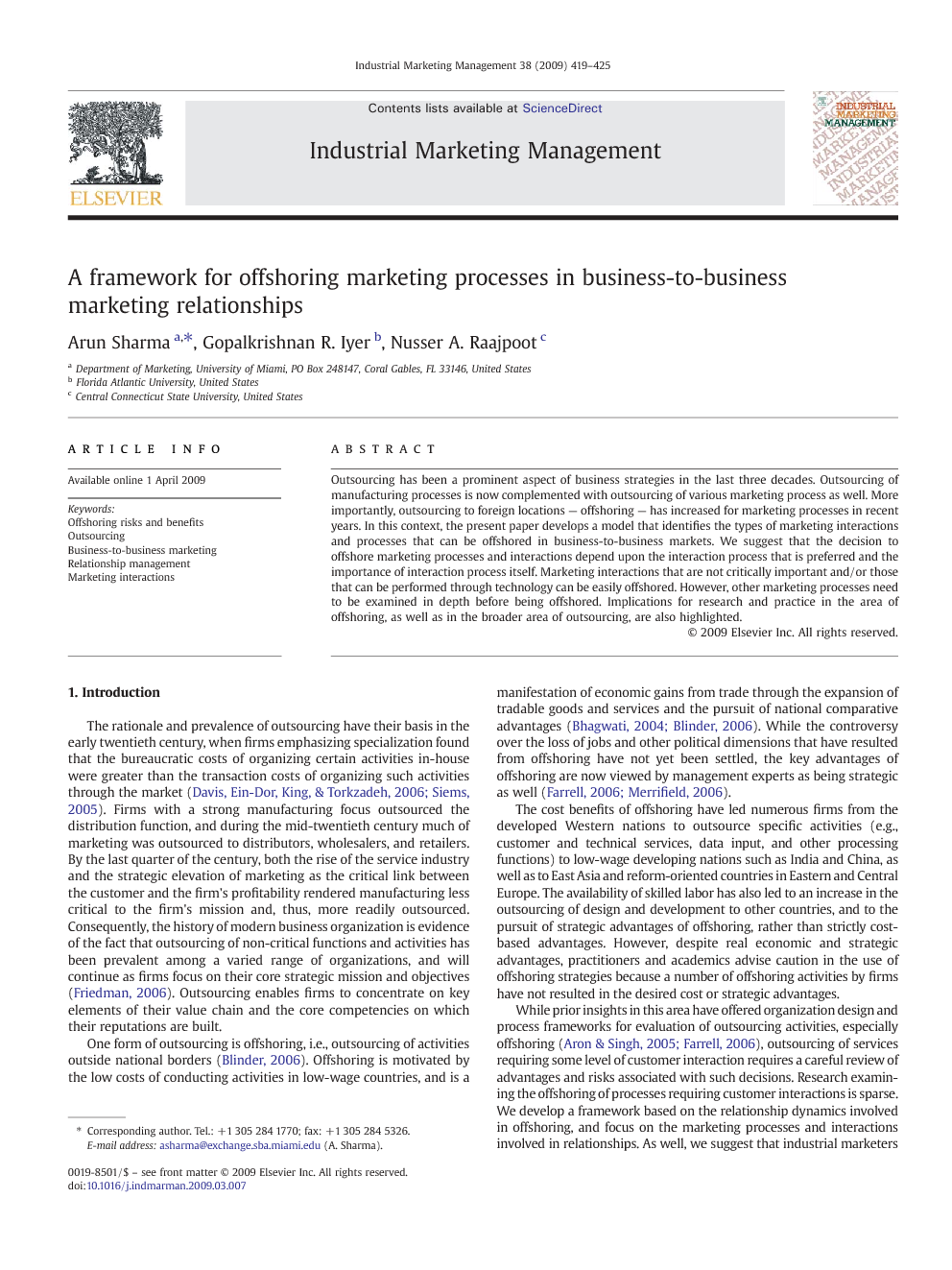 The rationale and prevalence of outsourcing have their basis in the early twentieth century, when firms emphasizing specialization found that the bureaucratic costs of organizing certain activities in-house were greater than the transaction costs of organizing such activities through the market (Davis et al., 2006 and Siems, 2005). Firms with a strong manufacturing focus outsourced the distribution function, and during the mid-twentieth century much of marketing was outsourced to distributors, wholesalers, and retailers. By the last quarter of the century, both the rise of the service industry and the strategic elevation of marketing as the critical link between the customer and the firm's profitability rendered manufacturing less critical to the firm's mission and, thus, more readily outsourced. Consequently, the history of modern business organization is evidence of the fact that outsourcing of non-critical functions and activities has been prevalent among a varied range of organizations, and will continue as firms focus on their core strategic mission and objectives (Friedman, 2006). Outsourcing enables firms to concentrate on key elements of their value chain and the core competencies on which their reputations are built. One form of outsourcing is offshoring, i.e., outsourcing of activities outside national borders (Blinder, 2006). Offshoring is motivated by the low costs of conducting activities in low-wage countries, and is a manifestation of economic gains from trade through the expansion of tradable goods and services and the pursuit of national comparative advantages (Bhagwati, 2004 and Blinder, 2006). While the controversy over the loss of jobs and other political dimensions that have resulted from offshoring have not yet been settled, the key advantages of offshoring are now viewed by management experts as being strategic as well (Farrell, 2006 and Merrifield, 2006). The cost benefits of offshoring have led numerous firms from the developed Western nations to outsource specific activities (e.g., customer and technical services, data input, and other processing functions) to low-wage developing nations such as India and China, as well as to East Asia and reform-oriented countries in Eastern and Central Europe. The availability of skilled labor has also led to an increase in the outsourcing of design and development to other countries, and to the pursuit of strategic advantages of offshoring, rather than strictly cost-based advantages. However, despite real economic and strategic advantages, practitioners and academics advise caution in the use of offshoring strategies because a number of offshoring activities by firms have not resulted in the desired cost or strategic advantages. While prior insights in this area have offered organization design and process frameworks for evaluation of outsourcing activities, especially offshoring (Aron and Singh, 2005 and Farrell, 2006), outsourcing of services requiring some level of customer interaction requires a careful review of advantages and risks associated with such decisions. Research examining the offshoring of processes requiring customer interactions is sparse. We develop a framework based on the relationship dynamics involved in offshoring, and focus on the marketing processes and interactions involved in relationships. As well, we suggest that industrial marketers can offshore some interactions, such as those that can be managed electronically or mechanically, but must be cautious about outsourcing or offshoring processes that require interpersonal interactions. While we focus on offshoring, our framework can be applied to traditional forms of B2B marketing outsourcing. The justification for our framework arises from two recent research streams. First, a vast majority of the research in recent years within industrial marketing has either implicitly or explicitly regarded interpersonal relationships as critical to successful business strategies in industrial markets (see Iyer, Sharma, & Evanschitzky, 2006). Most interpersonal relationship research emphasizes the importance of frequent face-to-face interactions. Second, the advantages and disadvantages of outsourcing have been examined in both academic research and in practice (Friedman, 2006 and Weidenbaum, 2005). The rise of India, China and other Asian countries as locales for services outsourcing has sparked further interest in this area (Friedman, 2006 and Weidenbaum, 2005). Although research on outsourcing has been extensive in areas such as manufacturing and logistics, there has been little research in the area of services outsourcing, and specifically in marketing services outsourcing. The inadequate investigation of this topic is surprising, especially given that major Fortune 500 firms such GM, IBM, Ericsson, Sony, Allstate Insurance, and American Express have been outsourcing services, especially marketing activities (McGovern & Quelch, 2005). For example, IBM's Indian operations is “one of its most important global hubs for delivery of IT services to clients world-wide” and “one-sixth of its global work force is now based in India” (Gupta & Wang, 2007). The fact that offshoring marketing activities is quite common was reported by a recent survey that found that about 35% of high-tech companies outsource their marketing to other partners (PR Newswire, 2006). Such marketing outsourcing involve activities ranging from launching new products or services or implementing marketing initiatives, to outsourcing the entire marketing function to a company that provides a turnkey marketing department (Vence, 2004). The organization of this paper is as follows. We first review the literature on outsourcing with a special focus on offshoring, highlighting some of the major economic and strategic benefits, as well as risks, of offshoring. We then develop our framework based on interaction processes. Finally, we offer some implications for managers and offer guidelines for future research.