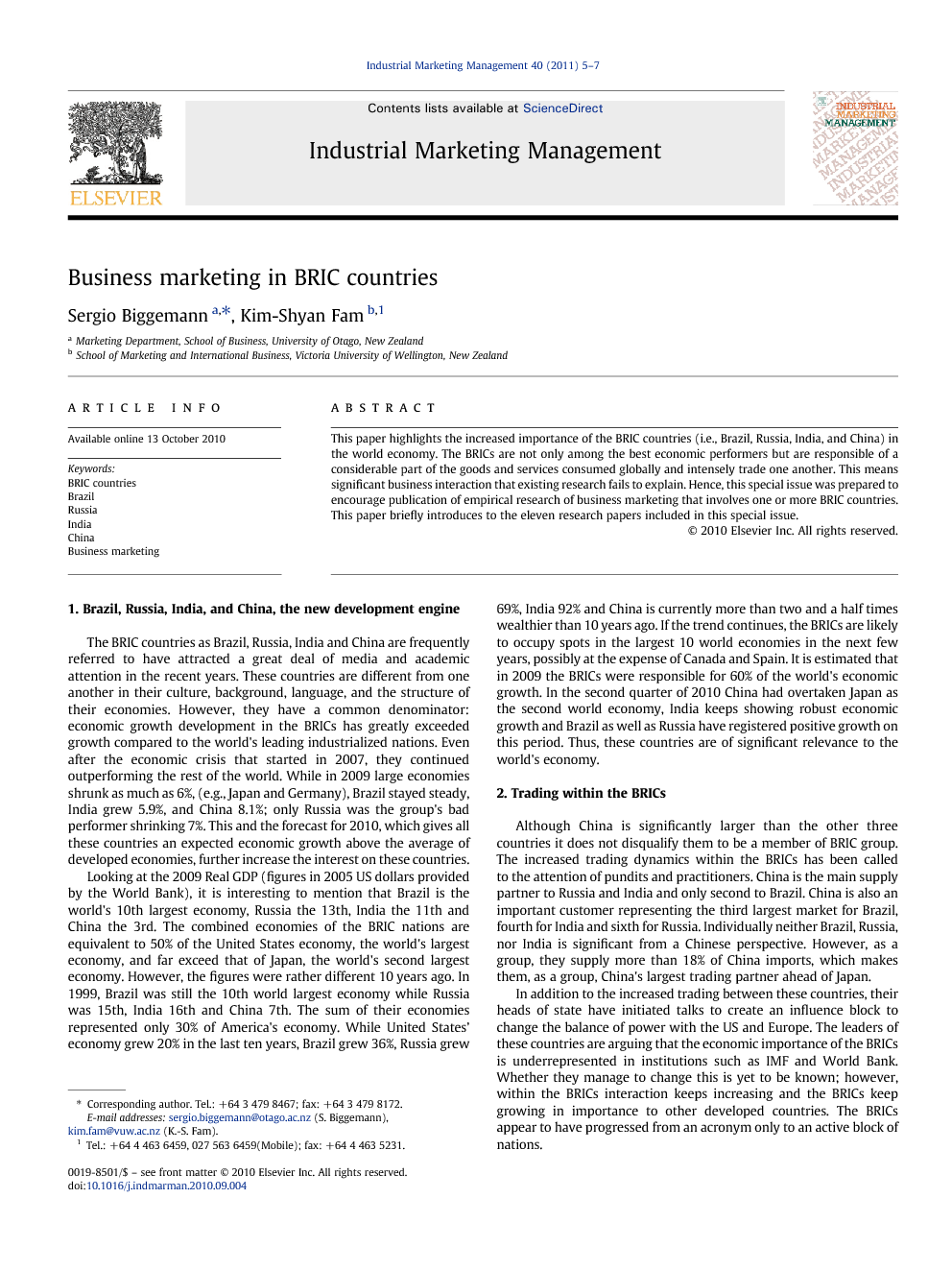 This paper highlights the increased importance of the BRIC countries (i.e., Brazil, Russia, India, and China) in the world economy. The BRICs are not only among the best economic performers but are responsible of a considerable part of the goods and services consumed globally and intensely trade one another. This means significant business interaction that existing research fails to explain. Hence, this special issue was prepared to encourage publication of empirical research of business marketing that involves one or more BRIC countries. This paper briefly introduces to the eleven research papers included in this special issue.

The BRIC countries as Brazil, Russia, India and China are frequently referred to have attracted a great deal of media and academic attention in the recent years. These countries are different from one another in their culture, background, language, and the structure of their economies. However, they have a common denominator: economic growth development in the BRICs has greatly exceeded growth compared to the world's leading industrialized nations. Even after the economic crisis that started in 2007, they continued outperforming the rest of the world. While in 2009 large economies shrunk as much as 6%, (e.g., Japan and Germany), Brazil stayed steady, India grew 5.9%, and China 8.1%; only Russia was the group's bad performer shrinking 7%. This and the forecast for 2010, which gives all these countries an expected economic growth above the average of developed economies, further increase the interest on these countries. Looking at the 2009 Real GDP (figures in 2005 US dollars provided by the World Bank), it is interesting to mention that Brazil is the world's 10th largest economy, Russia the 13th, India the 11th and China the 3rd. The combined economies of the BRIC nations are equivalent to 50% of the United States economy, the world's largest economy, and far exceed that of Japan, the world's second largest economy. However, the figures were rather different 10 years ago. In 1999, Brazil was still the 10th world largest economy while Russia was 15th, India 16th and China 7th. The sum of their economies represented only 30% of America's economy. While United States’ economy grew 20% in the last ten years, Brazil grew 36%, Russia grew 69%, India 92% and China is currently more than two and a half times wealthier than 10 years ago. If the trend continues, the BRICs are likely to occupy spots in the largest 10 world economies in the next few years, possibly at the expense of Canada and Spain. It is estimated that in 2009 the BRICs were responsible for 60% of the world's economic growth. In the second quarter of 2010 China had overtaken Japan as the second world economy, India keeps showing robust economic growth and Brazil as well as Russia have registered positive growth on this period. Thus, these countries are of significant relevance to the world's economy.

All the papers included in this special issue and many others that we regrettably could not be included demonstrate that business marketing research is an important stream of research in the BRICs. The topics that have been addressed do not differ significantly from those studied in traditional Western countries. However, their findings, not always consistent with existing knowledge, contribute to its advancement. The main differences between BRICs and Western countries were found in the effects of culture on relationship development and, in the case of Russia, the effects of many years of communism that still affect business practices. However, a significant part of existing knowledge in business marketing is suitable to studying the BRICs. The articles published in this special issue open new avenues for research. As the trading levels within the BRICs and between them and the rest of the world continue to increase, gaining knowledge from the BRICs becomes even more important.