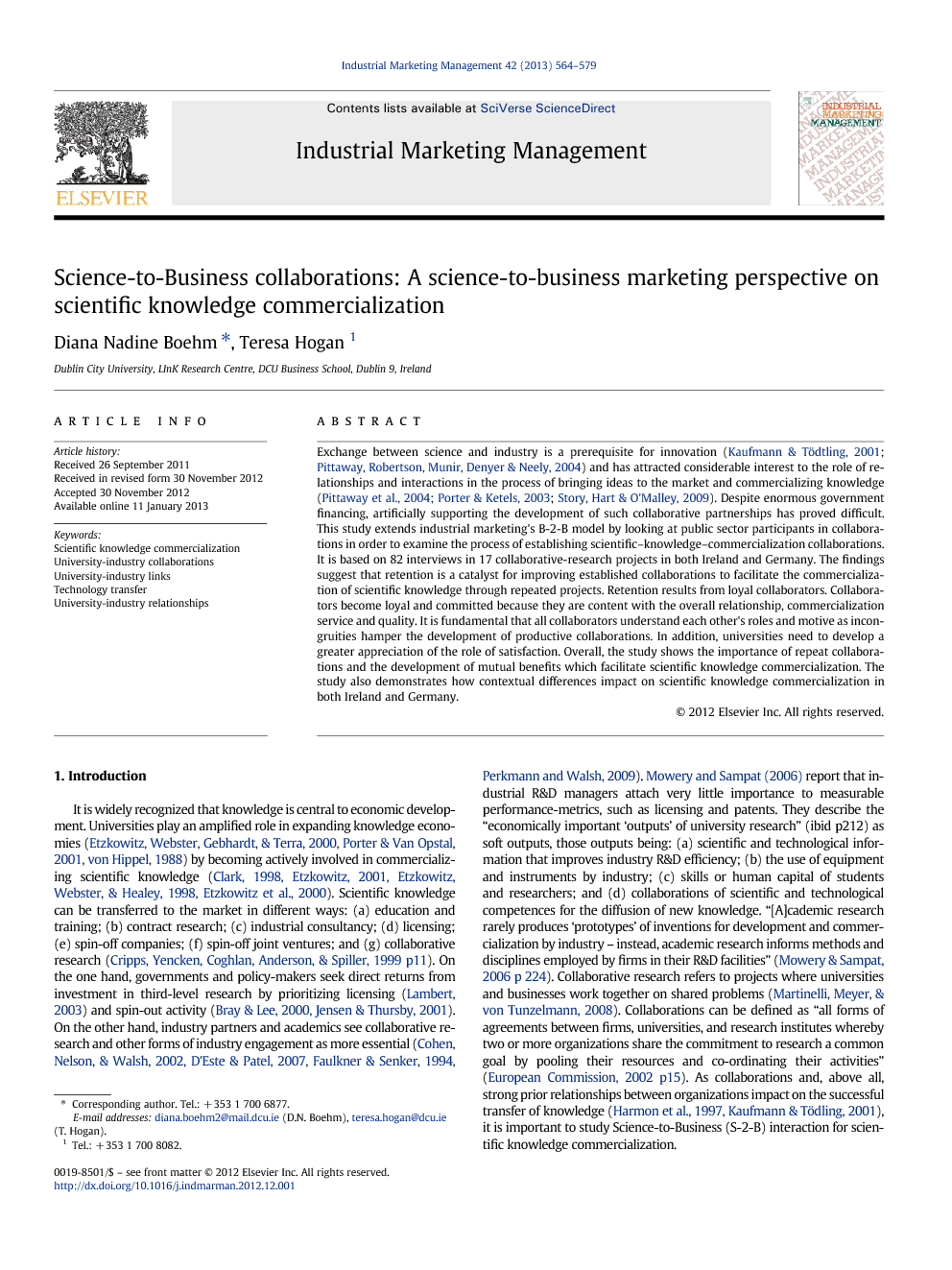 Exchange between science and industry is a prerequisite for innovation (Kaufmann & Tödtling, 2001; Pittaway, Robertson, Munir, Denyer & Neely, 2004) and has attracted considerable interest to the role of relationships and interactions in the process of bringing ideas to the market and commercializing knowledge (Pittaway et al., 2004 and Porter and Ketels, 2003; Story, Hart & O'Malley, 2009). Despite enormous government financing, artificially supporting the development of such collaborative partnerships has proved difficult. This study extends industrial marketing's B-2-B model by looking at public sector participants in collaborations in order to examine the process of establishing scientific–knowledge–commercialization collaborations. It is based on 82 interviews in 17 collaborative-research projects in both Ireland and Germany. The findings suggest that retention is a catalyst for improving established collaborations to facilitate the commercialization of scientific knowledge through repeated projects. Retention results from loyal collaborators. Collaborators become loyal and committed because they are content with the overall relationship, commercialization service and quality. It is fundamental that all collaborators understand each other's roles and motive as incongruities hamper the development of productive collaborations. In addition, universities need to develop a greater appreciation of the role of satisfaction. Overall, the study shows the importance of repeat collaborations and the development of mutual benefits which facilitate scientific knowledge commercialization. The study also demonstrates how contextual differences impact on scientific knowledge commercialization in both Ireland and Germany.

It is widely recognized that knowledge is central to economic development. Universities play an amplified role in expanding knowledge economies (Etzkowitz et al., 2000, Porter and Van Opstal, 2001 and von Hippel, 1988) by becoming actively involved in commercializing scientific knowledge (Clark, 1998, Etzkowitz, 2001, Etzkowitz et al., 1998 and Etzkowitz et al., 2000). Scientific knowledge can be transferred to the market in different ways: (a) education and training; (b) contract research; (c) industrial consultancy; (d) licensing; (e) spin-off companies; (f) spin-off joint ventures; and (g) collaborative research (Cripps, Yencken, Coghlan, Anderson, & Spiller, 1999 p11). On the one hand, governments and policy-makers seek direct returns from investment in third-level research by prioritizing licensing (Lambert, 2003) and spin-out activity (Bray and Lee, 2000 and Jensen and Thursby, 2001). On the other hand, industry partners and academics see collaborative research and other forms of industry engagement as more essential (Cohen et al., 2002, D'Este and Patel, 2007, Faulkner and Senker, 1994 and Perkmann and Walsh, 2009). Mowery and Sampat (2006) report that industrial R&D managers attach very little importance to measurable performance-metrics, such as licensing and patents. They describe the “economically important ‘outputs’ of university research” (ibid p212) as soft outputs, those outputs being: (a) scientific and technological information that improves industry R&D efficiency; (b) the use of equipment and instruments by industry; (c) skills or human capital of students and researchers; and (d) collaborations of scientific and technological competences for the diffusion of new knowledge. “[A]cademic research rarely produces ‘prototypes’ of inventions for development and commercialization by industry – instead, academic research informs methods and disciplines employed by firms in their R&D facilities” (Mowery & Sampat, 2006 p 224). Collaborative research refers to projects where universities and businesses work together on shared problems (Martinelli, Meyer, & von Tunzelmann, 2008). Collaborations can be defined as “all forms of agreements between firms, universities, and research institutes whereby two or more organizations share the commitment to research a common goal by pooling their resources and co-ordinating their activities” (European Commission, 2002 p15). As collaborations and, above all, strong prior relationships between organizations impact on the successful transfer of knowledge (Harmon et al., 1997 and Kaufmann and Tödtling, 2001), it is important to study Science-to-Business (S-2-B) interaction for scientific knowledge commercialization. Relationships and interactions have enjoyed increased acknowledgement in marketing literature. Business-to-Business (B-2-B) marketing is concerned with the mutual benefit that all participants gain by being in a long-term relationship and collaborations. The B-2-B literature emphasizes the prominence of interactions in facilitating shared R&D goals (Håkansson, 1982 and Möller and Svahn, 2003). To date research has primarily focused on business relationships within private industry (Dwyer et al., 1987, Håkansson, 1982 and Möller and Svahn, 2003). While acknowledging the role of science partners, most studies focus on B-2-B collaborations and networks (Pittaway et al., 2004) and only look at the benefits for firms. In so doing, current research ignores other collaborators such as public sector participants (Plewa and Quester, 2008 and Rampersad et al., 2010). Thus theoretical insights in B-2-B marketing theory have been driven by the private sector research perspective. Additionally, as previous research has focused on the firm, the mutual benefits that relationships with other parties in collaborative partnerships deliver have been ignored. Similarly, individual benefits for other participants, such as benefits for a university, have also been ignored. By researching collaborations that incorporate the public sector in the form of universities (i.e. S-2-B collaborations), this study therefore addresses a literature gap that is relevant to industrial-marketing researchers. The majority of the B-2-B literature has focused on existing collaborations and networks. There is little research on the establishment of collaborations or management of emerging collaborative networks (Möller and Svahn, 2003 and Möller and Svahn, 2009). Thus, studying how and by whom such S-2-B collaborations are established offers interesting insights that current research has not yet addressed. As the motives to partner with universities have mainly been researched from an industry perspective, this study looks at these issues from the perspective of all collaborating partners on a project including: (a) university researchers (Principal Investigators (PIs)); (b) industry partners; (c) Technology Transfer Office (TTO) managers; (d) government agents; and (e) commercialization or center managers. It addresses the gaps identified in B-2-B marketing literature and to respond to the calls for research on: (1) the process of establishing collaborations in a S-2-B environment; and (2) mutual benefits of such collaborations. In achieving this aim, the study also responds to the call to study multi-party relationships (Plewa and Quester, 2008 and Rampersad et al., 2010).

The study finds that the PI plays an important role in the establishment of S-2-B collaborations for scientific knowledge commercialization. The PI initiates contacts or, where an industry partner initiates contact, the PI is the key reason for the industry partner's initiative. The PI has to show a willingness to collaborate with industry. Prior research indicates that recognition within the scientific community is a major motiving factor for scientists (Siegel, 2003, Siegel et al., 2003 and Siegel et al., 2004). Therefore, encouraging scientists to publish should not be difficult. Encouraging an interest in collaboration, however, is more difficult to achieve as it may not be an important motive for researchers. While O'Connor and McDermott (2004) report the challenges firms face in encouraging their employees to engage in collaborative radical innovation projects, this study outlines that the university encounters similar challenges in encourage PIs to work towards collaborative projects in general. It was also observed that PIs with industry experience have an advantage in the contact initiation process as their previous experience will have generated a ready-made list of relevant contacts. The findings show that B-2-B marketing constructs help to explain how S-2-B collaborations are established. Satisfaction is based on both a cognitive and affective evaluation process of technology and service (the commercialization process) and the relationship quality. Satisfaction results from an assessment of economic and/or psychosocial aspects of the business relationship between collaborators and a university. In particular, industry partners evaluate: (a) professionalism; (b) timing; (c) market and industry awareness of the PI and center; and (d) realistic evaluation and feasibility of IP and project. While these criteria appear to be peculiar to industry partners, all partners stressed the importance of: (a) communication; (b) research output and quality; and (c) relationship quality. Relationship quality, as added value, becomes particularly important when other universities are able to provide similar knowledge. The findings propose that trust, commitment and a favorable attitude deriving from first experiences or past collaborations contribute to the creation of loyalty. Loyalty exists if the collaborators show the first signs of a lower intention to change and if they consider using the service of the university or working with the industry again. This manifests where industry partners continue to want to collaborate with a certain PI or center. Indeed, the study finds that industry partners become loyal to PIs. This is also the case for TTO managers who want to continue working with certain PIs. Likewise, PIs are committed and have an enduring desire to maintain valued relationships with industry partners, TTO managers and government agents. The importance of relationships between individuals, rather than inter-organizational relationships, is therefore highlighted in the study. As such loyalty in a S-2-B context is consistent with B-2-B marketing where loyalty evolves through long-term coevolution between partners and is based on retention and mutual benefits. The transition from loyalty to retention takes place when a favorable attitude, acceptance of the university (more particularly, key university employees), trust and commitment actually result in recommendations or re-use of the service by industry partners or recommendation of other participants (e.g. TTO managers, Government agents). Retention is the most important objective of relationship success. Relationship success and retention contribute to scientific knowledge commercialization due to repeat information, physical or financial transactions. A “demonstration effect,” whereby previous collaboration success is leveraged, is also evident from the interviews. This effect refers to the ability to build improved collaborations where collaborators show a higher willingness to invest and create new knowledge due to satisfaction with the previous relationship and process. Retention thus influences the development of advanced collaborations by facilitating repeat projects. The findings suggest that retention is a catalyst for developing collaborations which facilitate innovation and a higher likelihood of scientific knowledge commercialization success. These findings accord with research on university–industry partnerships of Powell and Grodal (2006) who suggest that, as trust and cognitive understanding requiring time to develop, the influence of collaboration on innovation depends on previous interactions and relationship building. They further cite examples that more radical innovation is facilitated from close and persistent interaction. Close relationships are also believed to overcome cultural differences between academic researchers and industry partners (Mowery & Sampat, 2006). One explanation that Powell and Grodal (2006) provide is that such strong relationships better enable the transfer of tacit knowledge. Such continuous collaborations then accord with the views of industrial-marketing scholars who argue that the relationship is the most important aspect in achieving mutual goals (Dwyer et al., 1987) and that trust and commitment are the most important aspect for relationship success (Morgan & Hunt, 1994). These marketing scholars further acknowledge that collaborations facilitate innovation (Håkansson, 1982, Möller and Svahn, 2003, Porter and Ketels, 2003 and Story et al., 2009). However, there is an important caveat in relation to the length and breadth of university–industry partnerships. Powell and Grodal (2006), while acknowledging the importance of collaborations, point out that if collaborations are too closed and no new members get access to the collaborations, participation can hamper innovation and thereby invention and exploitation.