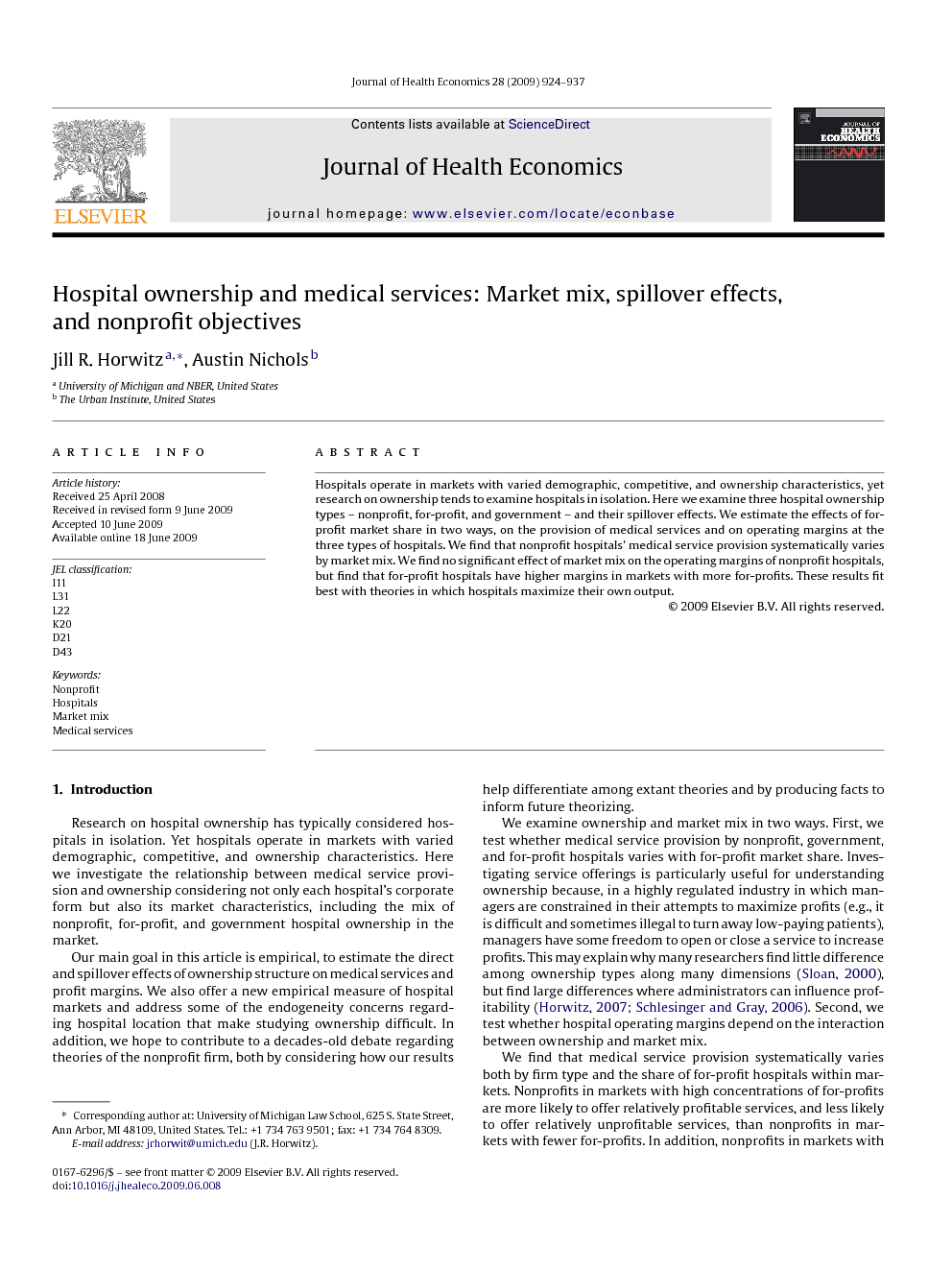 Hospitals operate in markets with varied demographic, competitive, and ownership characteristics, yet research on ownership tends to examine hospitals in isolation. Here we examine three hospital ownership types – nonprofit, for-profit, and government – and their spillover effects. We estimate the effects of for-profit market share in two ways, on the provision of medical services and on operating margins at the three types of hospitals. We find that nonprofit hospitals’ medical service provision systematically varies by market mix. We find no significant effect of market mix on the operating margins of nonprofit hospitals, but find that for-profit hospitals have higher margins in markets with more for-profits. These results fit best with theories in which hospitals maximize their own output.

Research on hospital ownership has typically considered hospitals in isolation. Yet hospitals operate in markets with varied demographic, competitive, and ownership characteristics. Here we investigate the relationship between medical service provision and ownership considering not only each hospital's corporate form but also its market characteristics, including the mix of nonprofit, for-profit, and government hospital ownership in the market. Our main goal in this article is empirical, to estimate the direct and spillover effects of ownership structure on medical services and profit margins. We also offer a new empirical measure of hospital markets and address some of the endogeneity concerns regarding hospital location that make studying ownership difficult. In addition, we hope to contribute to a decades-old debate regarding theories of the nonprofit firm, both by considering how our results help differentiate among extant theories and by producing facts to inform future theorizing. We examine ownership and market mix in two ways. First, we test whether medical service provision by nonprofit, government, and for-profit hospitals varies with for-profit market share. Investigating service offerings is particularly useful for understanding ownership because, in a highly regulated industry in which managers are constrained in their attempts to maximize profits (e.g., it is difficult and sometimes illegal to turn away low-paying patients), managers have some freedom to open or close a service to increase profits. This may explain why many researchers find little difference among ownership types along many dimensions (Sloan, 2000), but find large differences where administrators can influence profitability (Horwitz, 2007 and Schlesinger and Gray, 2006). Second, we test whether hospital operating margins depend on the interaction between ownership and market mix. We find that medical service provision systematically varies both by firm type and the share of for-profit hospitals within markets. Nonprofits in markets with high concentrations of for-profits are more likely to offer relatively profitable services, and less likely to offer relatively unprofitable services, than nonprofits in markets with fewer for-profits. In addition, nonprofits in markets with high for-profit market share are more likely than other nonprofits to offer post-acute services, such as home health care, when government reimbursement policies make them relatively profitable and less likely to offer them when profit-making opportunities are low. Government hospitals demonstrate a similar, although considerably weaker, pattern. Among for-profit hospitals, we find no systematic, significant relationship between service provision and for-profit market share. Further, we find no measurable effect of market mix on nonprofit hospital profit margins. However, for-profits show higher profit margins in high for-profit markets than those in low for-profit markets. Based on an informal discussion of nonprofit theories, we conclude that our medical services results are most consistent with either models in which nonprofits maximize their own output (Baumol and Bowen, 1965 and Newhouse, 1970) or some nonprofits are output maximizing (Hirth, 1999). Our finding that increased for-profit market share (and decreased nonprofit share) has a positive effect on for-profit hospitals’ operating margins is also consistent with the model that nonprofits maximize output, although we cannot rule out other models in which some nonprofits maximize output and others do not.

We identify a strong and systematic relationship among hospital ownership, ownership mix in the market, and medical service provision. Nonprofit hospitals located in markets with high for-profit penetration are more likely to offer relatively profitable services than those in low for-profit penetration markets. With the exception of only one tested service (burn care), nonprofits are less likely to offer every unprofitable service in high compared to low for-profit markets. Perhaps the most convincing evidence for the effect of market mix is the results for home health and skilled nursing, post-acute services that were first ambiguously profitable, then profitable, then less profitable again. During the most profitable period, nonprofits were more likely to offer them in high, compared to low for-profit markets. During less profitable periods, depending on the specification, there was either no discernable difference or more dramatic exit among nonprofits in for-profit markets. We find no systematic effect of market mix on government and for-profit medical service offerings. Government hospitals may follow a similar pattern to nonprofits, but the effect is smaller than for nonprofits, and few results are statistically significant. Although for-profit hospitals are somewhat less likely to offer many of the tested services in markets with high, compared to low, for-profit market share, these results are generally insignificant as well. That there is essentially no difference in for-profit or government hospital behavior in low versus high for-profit markets suggests that the differences we find in nonprofit hospital behavior are not entirely driven by unmodeled market differences. More specifically, these results can be interpreted as a difference-in-difference estimate of the effect of market mix on nonprofit service provision because the estimate of for-profit (or government) behavior to be subtracted from the nonprofit difference is essentially zero. Again, these patterns are especially clear in the case of home health, where nonprofits were significantly more likely to offer the service in high for-profit markets in the profitable years (1993–1997) but the difference disappears after 1998; for-profit and government hospitals, while clearly responding to incentives, exhibit no real differences by for-profit market share. Although the patterns we identify here cannot establish a causal effect, they do suggest that the ownership mix in a market influences nonprofit behavior in important decisions about whether to offer a service. The thought experiment of exogenously changing the ownership of a typical for-profit to a nonprofit or vice versa cannot be duplicated in real data, so the relevant counterfactuals cannot be examined. As we have discussed, it is possible that the observed empirical patterns are the result of selection, such as choice over location, but we find this hypothesis unconvincing for several reasons. First, the explanation assumes low-cost entry and exit, and a complete space of possible location choices, when in practice for-profits have typically purchased nonprofits that were willing to sell or built new hospitals in areas with population growth. Second, our findings do not support this type of selection explanation. Coding individual hospitals by their initial year ownership status yields similar results to those in which we code hospitals by their current year status in the basic specification, suggesting that location does not explain all relevant behavioral differences. Another alternative explanation is that patients choose hospital types based on the nature of their ailments and the transparency of care quality. This too seems unlikely. First, given the detailed demographic controls in our study, one needs a complicated story to explain why patients in locations with high for-profit penetration are more likely to demand their profitable services from nonprofits than in other locations. Second, patients are treated where their doctors admit them and their insurers allow payment. Which hospitals accept a patient's insurance plan or where a patient's doctor has admitting privileges are decisions that are generally exogenous to the patients’ illness. Third, to the extent that some patients, through their doctors, are able to match illnesses and hospitals, quality information is not readily available for many treatments. Finally, the observed patterns are more consistent with some theories of the nonprofit firm than others. Table 1 summarizes some intuitive interpretations of existing theories of nonprofit hospitals’ objectives, suggesting what these theories would predict for hospitals operating in low for-profit and high for-profit markets. We find a theory of the nonprofit firm in which a hospital maximizes its own output most convincing. Assuming a causal interpretation of the estimates, we cannot yet identify the most efficient market mix. Even if high concentrations of for-profit markets could be shown to have a deleterious effect on nonprofit service provision, other researchers have identified potential efficiency gains from for-profit ownership (see, e.g., Grabowski and Hirth, 2002, Kessler and McClellan, 2002 and Rosko, 2001). These may outweigh the danger of inefficiently low provision of unprofitable services or inefficiently high provision of profitable services. To identify an optimal mix within a market, one needs to know both the differences among ownership types and the market level implications of those differences. This work represents a step in that direction. However, a comprehensive theory of nonprofit and for-profit coexistence in a market must be developed before the theoretical models we have discussed can be formally tested, and such a theory must take account of the non-Walrasian nature of many of these markets, where neither prices nor quantities are observed, and the producer and consumer are not clearly identified. Such a theory must also explain why some markets and not others exhibit nonprofit and for-profit coexistence. Finally, such a theory will have to explain the empirical regularities we have identified in this paper.