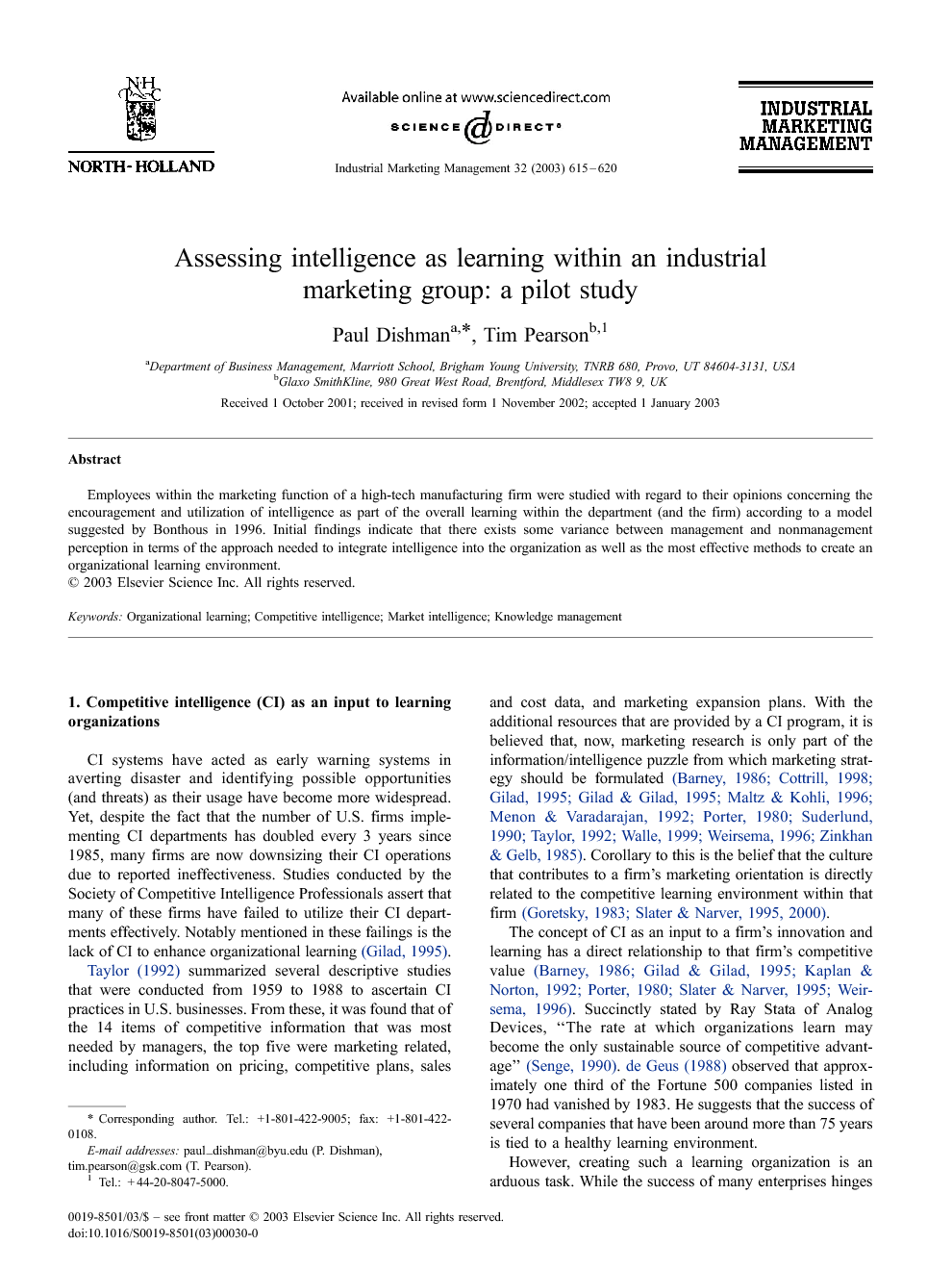 Employees within the marketing function of a high-tech manufacturing firm were studied with regard to their opinions concerning the encouragement and utilization of intelligence as part of the overall learning within the department (and the firm) according to a model suggested by Bonthous in 1996. Initial findings indicate that there exists some variance between management and nonmanagement perception in terms of the approach needed to integrate intelligence into the organization as well as the most effective methods to create an organizational learning environment.

CI systems have acted as early warning systems in averting disaster and identifying possible opportunities (and threats) as their usage have become more widespread. Yet, despite the fact that the number of U.S. firms implementing CI departments has doubled every 3 years since 1985, many firms are now downsizing their CI operations due to reported ineffectiveness. Studies conducted by the Society of Competitive Intelligence Professionals assert that many of these firms have failed to utilize their CI departments effectively. Notably mentioned in these failings is the lack of CI to enhance organizational learning (Gilad, 1995). Taylor (1992) summarized several descriptive studies that were conducted from 1959 to 1988 to ascertain CI practices in U.S. businesses. From these, it was found that of the 14 items of competitive information that was most needed by managers, the top five were marketing related, including information on pricing, competitive plans, sales and cost data, and marketing expansion plans. With the additional resources that are provided by a CI program, it is believed that, now, marketing research is only part of the information/intelligence puzzle from which marketing strategy should be formulated Barney, 1986, Cottrill, 1998, Gilad, 1995, Gilad & Gilad, 1995, Maltz & Kohli, 1996, Menon & Varadarajan, 1992, Porter, 1980, Suderlund, 1990, Taylor, 1992, Walle, 1999, Weirsema, 1996 and Zinkhan & Gelb, 1985. Corollary to this is the belief that the culture that contributes to a firm's marketing orientation is directly related to the competitive learning environment within that firm Goretsky, 1983, Slater & Narver, 1995 and Slater & Narver, 2000. The concept of CI as an input to a firm's innovation and learning has a direct relationship to that firm's competitive value Barney, 1986, Gilad & Gilad, 1995, Kaplan & Norton, 1992, Porter, 1980, Slater & Narver, 1995 and Weirsema, 1996. Succinctly stated by Ray Stata of Analog Devices, “The rate at which organizations learn may become the only sustainable source of competitive advantage” (Senge, 1990). de Geus (1988) observed that approximately one third of the Fortune 500 companies listed in 1970 had vanished by 1983. He suggests that the success of several companies that have been around more than 75 years is tied to a healthy learning environment.

The respondents' position within the company job subgroups can be found in Table 2. Respondents were also grouped according to executive/managerial duties (46%) and those that did not have managerial responsibilities (54%). In total, there were 7 executives that participated in the study, 12 people in sales, 13 in marketing, and 9 from other departments including product development and research. The average employee's tenure within the firm was 11.4 years. A mean response to each question was collectively derived from all respondents. The results for each employee subgroup are provided in Table 3.Overall, the findings indicate that employees perceive that a good organizational learning environment exists within the company. The mean scores of all the questions fell in the upper half of the criterion for a positive organizational learning environment, with the exception of “Approach to Growing People,” which was just below the midpoint at 4.66. All job subgroups rated “Approach to Growing People” as low, with it being the lowest for three of the five subgroups. The responses to “Breadth of Change Effort” (7.27), “Intelligence's Approach to Seeing the World” (7.66), and “Type of Intelligence” (7.10) especially reflect a favorable organizational learning environment. These responses may suggest that a very proactive effort to share intelligence exists at the company. Based on this model, the company appears to view itself as one whose organizational learning environment lends itself to CI implementation.