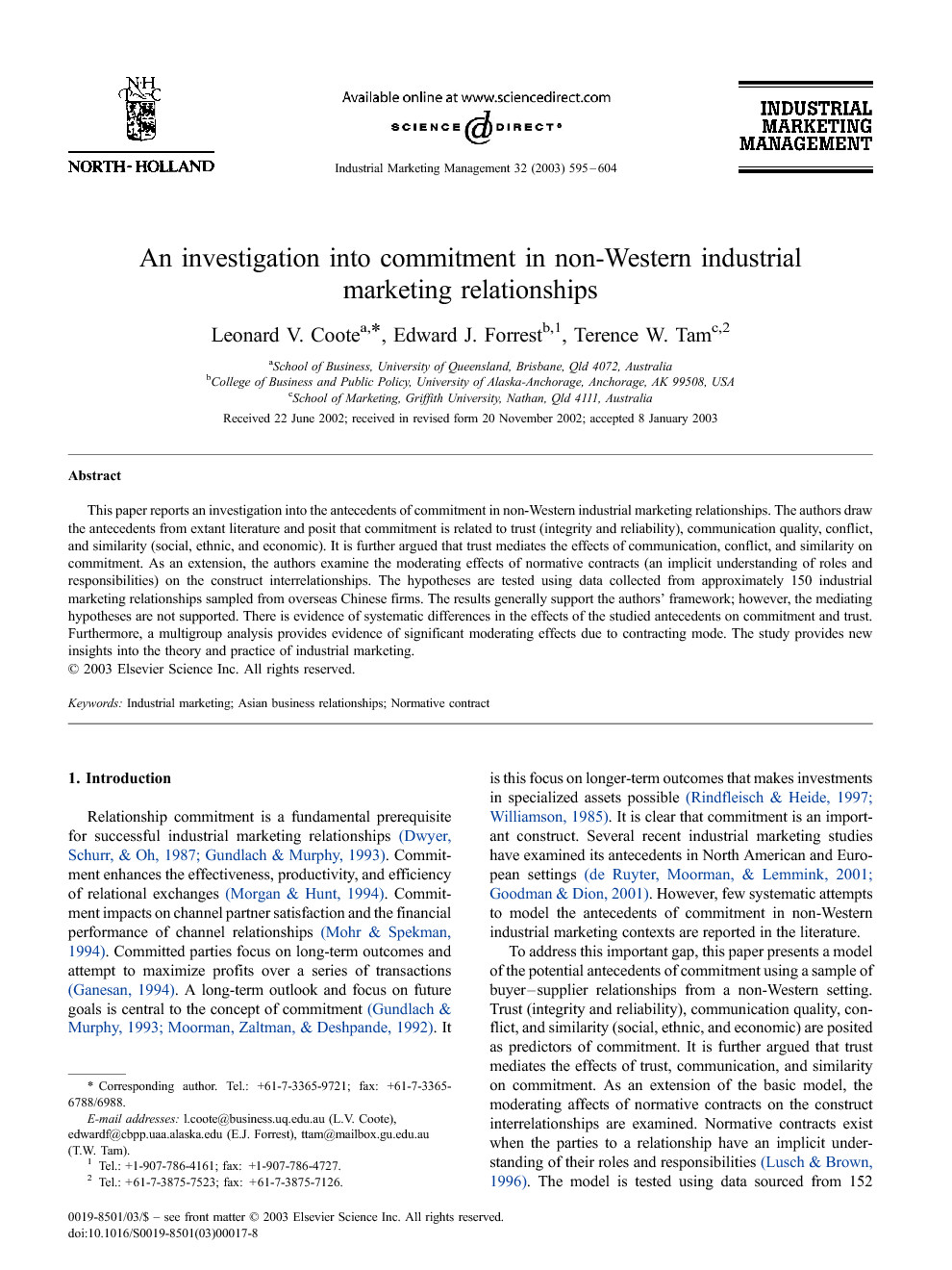 This paper reports an investigation into the antecedents of commitment in non-Western industrial marketing relationships. The authors draw the antecedents from extant literature and posit that commitment is related to trust (integrity and reliability), communication quality, conflict, and similarity (social, ethnic, and economic). It is further argued that trust mediates the effects of communication, conflict, and similarity on commitment. As an extension, the authors examine the moderating effects of normative contracts (an implicit understanding of roles and responsibilities) on the construct interrelationships. The hypotheses are tested using data collected from approximately 150 industrial marketing relationships sampled from overseas Chinese firms. The results generally support the authors' framework; however, the mediating hypotheses are not supported. There is evidence of systematic differences in the effects of the studied antecedents on commitment and trust. Furthermore, a multigroup analysis provides evidence of significant moderating effects due to contracting mode. The study provides new insights into the theory and practice of industrial marketing.

Relationship commitment is a fundamental prerequisite for successful industrial marketing relationships Dwyer et al., 1987 and Gundlach & Murphy, 1993. Commitment enhances the effectiveness, productivity, and efficiency of relational exchanges (Morgan & Hunt, 1994). Commitment impacts on channel partner satisfaction and the financial performance of channel relationships (Mohr & Spekman, 1994). Committed parties focus on long-term outcomes and attempt to maximize profits over a series of transactions (Ganesan, 1994). A long-term outlook and focus on future goals is central to the concept of commitment Gundlach & Murphy, 1993 and Moorman et al., 1992. It is this focus on longer-term outcomes that makes investments in specialized assets possible Rindfleisch & Heide, 1997 and Williamson, 1985. It is clear that commitment is an important construct. Several recent industrial marketing studies have examined its antecedents in North American and European settings de Ruyter et al., 2001 and Goodman & Dion, 2001. However, few systematic attempts to model the antecedents of commitment in non-Western industrial marketing contexts are reported in the literature. To address this important gap, this paper presents a model of the potential antecedents of commitment using a sample of buyer–supplier relationships from a non-Western setting. Trust (integrity and reliability), communication quality, conflict, and similarity (social, ethnic, and economic) are posited as predictors of commitment. It is further argued that trust mediates the effects of trust, communication, and similarity on commitment. As an extension of the basic model, the moderating affects of normative contracts on the construct interrelationships are examined. Normative contracts exist when the parties to a relationship have an implicit understanding of their roles and responsibilities (Lusch & Brown, 1996). The model is tested using data sourced from 152 buyer–supplier relationships sampled from overseas Chinese businesses. This is an appropriate context for study because a substantial proportion of economic activity occurs within the overseas Chinese business environment (Xin & Pearce, 1996). A rationale for the constructs and their hypothesized interrelationships are presented next (see Fig. 1). This is followed by a description of the research methodology and presentation of the results. The paper concludes with a discussion of the findings and their implications for the theory and practice of industrial marketing.